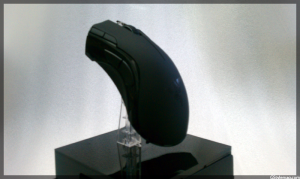 Hey guys, sorry for the long absence but I’ve been busy studying for midterms. It wasn’t all hectic though! During last week Razer sent me a little something, a Razer Mamba! If you remember, one of the earliest articles I wrote about was about the Mamba. So now I actually have the product itself to write a proper review. I would like to split my review into three categories; presentation/aesthetics, performance, and price. Let us get started! Also keep in mind this is a mouse fit for the palm gripper. 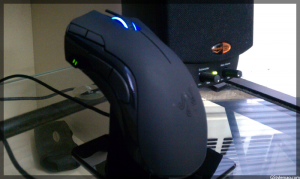 Aesthetics score: 10
A few things I wanted to add in here. The lighting is just plain amazing. Some people may say its over the top but I think that its just right. If Razer added lighting to their logo (like the Death Adder) then it would truly have been over the top. Another thing I want to mention is that the finish of the mouse is prone to fingerprints. After an intense gaming session I noticed that it was speckled with some hand sweat here and there. Nothing a simple wipe can’t take care of but if not properly cleaned, the prints will be visible.

Performance score: 8
Picture time is now over and we get technical! I have played a wide variety of games to test out this mouse’s performance. Starting with Battlefield Bad Company 2 (BC2). This is a first person shooting game (FPS) which many people play. One thing I really liked about this mouse while I played BC2 is the option of being able to change DPI (Dots per inch) on the fly. The higher DPI is, the smoother your pointer is. However this means that the pointer will be moving faster as well. So lets say you are running around with a machine gun but suddenly run out of ammo. Then you pick up a sniper rifle. Now obviously no one snipes at high DPI since then cross hair would be too quick for you to focus on a target. The Mamba has two button near the left click button allowing you to increase or decrease DPI. Thus with a simple click of a button you can now be a more effective sniper for your team! The two thumb buttons also are a great help. The first button (close to the tip of your thumb) was set as my push to talk, allowing me to converse with my squad mates telling each other where the enemies were and what to look out for. The second button (the one near your thumb joint) is set as my knife/melee button which allows for a quick reflex kill. The two thumb buttons are not only exclusive to Razer mice. There are a lot of other mice out there with these extra button. Its good that Razer has added these side buttons though as it really does make doing some tasks easier.

I have tested this mouse also on StarCraft II. This mouse had no delay wired or wifeless and allowed me to play with no interruptions. Clicking between units was a breeze and the two extra buttons also came in handy here as quick macros for unit commands. Finally comes League of Legends where precise timing is a must. Needless to say, the Mamba performed well in all the games I have played. 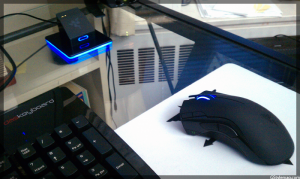 I noticed I had to recharge this mouse very frequently. The battery life is not horrible but whenever I use the computer I am always using the mouse. Therefore I had to swap the USB plug to the mouse to let it charge instead of placing it on the dock while I do something else. Probably the best time to charge your mouse would be if you are not there or if you are watching a movie. Honestly wired and wireless really make no difference performance wise so however you run it, it shouldn’t be a problem. One thing potential customers should be aware of is that there is a ON/OFF switch on the bottom of the mouse. If you use it wirelessly don’t forget to turn it off at the end of your computer session! I have also read through many other reviews on this mouse and many of them stated there were driver issues with this mouse. I haven’t run into any problems so I assume Razer has fixed these problems already. Another problem with this mouse is that if lifted, the cursor will move down and to the right. What does this mean? If you tend to pick up your mouse often you will have to spend more effort to move it back to its original place. This could be a big problem for some but for users who keep their mouse on their mat, then this will not be a big problem.

Price score: 7
As for the price. What do I really have to say? The mouse costs $130 from Razer’s online store but feel free to search around the web. Most likely all the prices will be above $100. Now can we afford to shell out a hundred dollars for a mouse? Maybe yes, maybe no, but if you do I would like to say this mouse Not everyone has $100 for a fancy mouse. There are many choices within the sub $100 range as well. Long story short, if you have money to spare, get it.

To recap, the scores are listed below:
Aesthetics: 10
Performance: 8
Price: 7 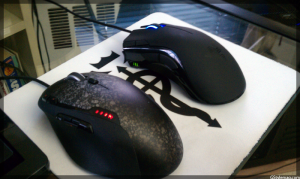 Extra thoughts: This mouse only took me roughly 2 days to get used to. It is very comfortable and fits the palm users very well. One thing I miss though from my prior Logitech G500 would be the scrolling wheel. Mice typically scroll bit by bit; however, the Logitech has hyper-scrolling which allows the user to unlock the scrolling wheel and thus when flicked, it would spin until it stops by itself. This made scrolling through long documents less painful.


Review unit was provided by Razer.