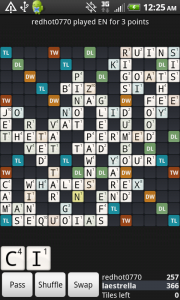 There are rare moments when I develop iPhone envy (shhh don’t tell anybody before I lose my cool card). These are few and far in between but it happens. In particular, this occurs when there is an app available for the iPhone that I can’t get on my current device (I don’t like being left out). After hearing about Words with Friends (a multiplayer scrabble game) I discovered with great annoyance that this popular app was not available for Android. I love scrabble and thought it would be awesome to play against people I know without them having to be physically present. So I searched and to my delight, enter Wordfeud.

Wordfeud is a highly addictive version of scrabble that is FREE and a great game to play in between the busy parts of your day. It essentially works the same way as scrabble. You get 7 letters and you must form words and score points. Really simple right? Â The neat thing about the game is that you don’t have to move immediately. Â You have about 72 hours to complete your turn. Â And for the heavyweights you can play up to 30Â simultaneousÂ games, just in case the person you are playing against isn’t as sharp as you and a challenge is needed. You can play people you know or find a random opponent to play. There is no computer opponent in this current version but I like beating humans anyway, much higher satisfaction rate. There is even a chat feature so you can trash talk as you beat someone or make excuses as you lose. I’ve been doing that latter a lot recently. Either way, just get the game. The only issue that I have, and that’s because I’m trying to be cheap, is that the free ad supported version makes an ad appear after every move. It is a very small price to pay for a free game that just works and provides endless entertainment. Â There is an ad free version for $2.99 if you’d like to support the developer. At the moment, payments are handled through PayPal for that version. Â Go to the app homepage (link below) for more info.

Get Wordfeud and add me as a friend so that I can school you on the art of spelling. My user name is “phenixascending” and my email address is phenixascending at gmail dot com.

Relevant links for download, screen shots and general inquiries are below: 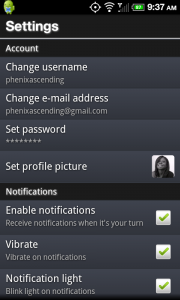 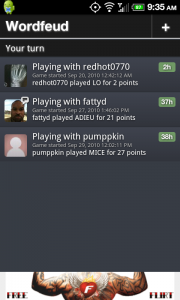 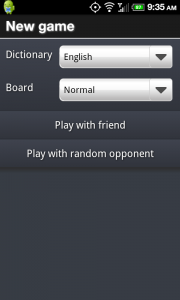