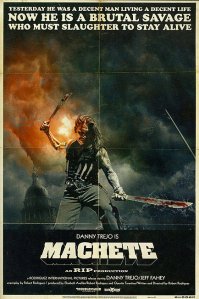 Machete (Danny Trejo) is a Mexican Federale who believes in getting justice done, the vigilante way. When he goes after Mexicoâ€™s biggest drug lord, Torrez (Steven Seagal), he finds out that his department chief is connected with Torrez, and he has been set up to fail on his mission. Torrez makes Machete watch as he kills his wife, and then they leave him for dead. Months later, Machete is working as a day laborer in Texas, and a man by the name of Booth (Jeff Fahey) offers him an assignment that he canâ€™t refuse. He wants Machete to assassinate Senator McLaughlin (Robert Deniro), who is trying to keep all Mexicans out of Texas.

It turns out that Machete is once again double crossed to be the fall guy in an attempt to actually boost the Senatorâ€™s votes by staging an assignation attempt. With the help of a local food truck operator, Luz (Michelle Rodriguez), who is also a crusader for the Mexicans, Machete is able to start his revenge against all those who have betrayed him and finally bring justice to the crooked ways in Texas politics. They will also have the aid of an immigration officer named Sartana (Jessica Alba) who has been trying to uncover the workings of an underground organization called â€œThe Networkâ€, which have been helping illegal Mexicans get into Texas. Now with all the players lined up, Machete will be able to take out all of his enemies and bring hope back to the Mexican people.

This movie was based on the short trailer from the movie â€œGrindhouseâ€ which Robert Rodriguez and Quentin Tarantino co-directed where both of them individually directed a 90 minute film each that were throwbacks to the days of low budget, movies of the 70â€™s and early 80â€™s that were shown in the seedy theaters such as the ones that were on 42nd street. These were exploitation films, sometimes referred to as grind house movies named after the type of theaters where they were predominantly shown. In between the movies were mock trailers, and Machete was one of them. The trailer got such a following that Rodriguez decided to get the whole cast back together to make it a full length movie. Just like in the two movies in â€œGrindhouseâ€, Machete is a cheesy, bad acted, blooded soaked, nudity filled throwback to the times of these types of movies. Itâ€™s the type of movie that is purposely done so bad, thatâ€™s itâ€™s laughable. Even with the all-star cast that Rodriguez has gotten together to star in this movie, they know that their acting skills are not what are needed to make a film like this. It is suppose to be bad and way over the top with all the sex and violence depicted in it. The only problem, it was a bit too bad. I really had a hard time liking this movie, even though I went in knowing what to expect. I knew the acting would be bad. I knew the story would be stupid. I knew that there would be some really unbelievable scenes. I also knew that it would be really bloody. That was about the only thing that kept me entertained was all the over the top blood splattered killing that was going on.

Also in the movie was Don Johnson as Lt. Stillman, a vigilante who killed Mexicans as they crossed the border into Texas. Then there was Cheech Marin who played Macheteâ€™s brother Padre, who use to be a Federale, but was now a pastor. Last but not least was Lindsay Lohan who played April. She didnâ€™t have to prepare much in the portrayal of her character as the drug abusing daughter of Jeff Faheyâ€™s character. So like I said the violence in the movie was definitely over-killed. The use of a machete would surely put a smile on Jason Vorhees face. I have to give this movie 1 slice of a machete, out of 4. There was a reason why they stopped making movies like this; they werenâ€™t that good back in the days either. The movie ran 1 hour and 45mins. It was rated R for strong bloody violence throughout, language, some sexual content and nudity. It was written by Robert Rodriguez. It was directed by Robert Rodriguez and Ethan Maniquis. The film was produced by Overnight Productions, Hyde Park Entertainment. It was distributed by 20th Century Fox Distribution.

If youâ€™re ever in a gun fight, donâ€™t bring a machete. Ezo
Next Weekâ€™s review: TBD