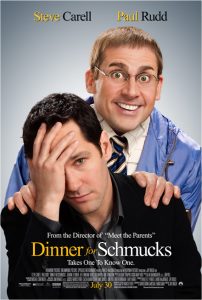 This past weekend audiences were invited to take part in a special dinner only reserved for the crÃ¨me de la crÃ¨me, or as others may refer to them, â€œSchmucksâ€. In the movie â€œDinner with Schmucksâ€ an up and coming executive named Tim (Paul Rudd) gets invited to an exclusive dinner his boss hostâ€™s once a month, where he and the other execs invite idiots to dinner so that they can make fun of them. The one who brings the biggest idiot then gets bragging rights for the rest of the month. Tim doesnâ€™t like the idea, but he feels itâ€™s the only way for him to get in good with his boss, so that he can advance at the company. Tim then runs into Barry (Steve Carell), literally as he is driving. When he gets out of his car to see if heâ€™s ok, he discovers that Barry is somewhat of an artist. Barry builds dioramas of events in history with dead mice, which he calls his mouse-terpieces. Tim realizes that he has just found his contestant for the dinner and invites Barry to accompany him.

Barry believes that he has just made a new friend and he becomes entwined in Timâ€™s life, which causes a world of disaster for Tim. Although Barry always has good intentions in his actions, they usually lead to something bad happening to Tim and in the course of a day he turns Timâ€™s world into a series of misadventures and almost causes Tim to lose a major client that his company is trying to make a deal with. Meanwhile Timâ€™s girlfriend, Julie (Stephanie Szostak) is turned off by the whole idea of the dinner and when Barry invites Timâ€™s stalker ex-girlfriend, Darla (Lucy Punch) to Timâ€™s apartment it doesnâ€™t help the relationship. Tim feels that these series of events will drive Julie into the arms of one of her work partners named Kieran (Jemaine Clement) who he feels is trying to have sex with her. Barry has turned Timâ€™s world upside down, and they havenâ€™t even gotten to the dinner yet. 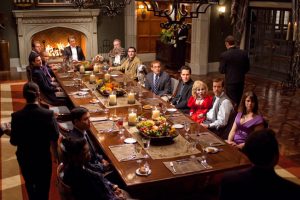 This movie had a boat load of characters that you could laugh at. Steve Carell was extremely funny as the nerdy but genuinely nice Barry. Paul Rudd was the perfect straight man to Carellâ€™s comedic high jinks. What also stood out to me were the other characters, such as Kieran the artist who only made art which depicted him. Then there was Therman (Zach Galifianakis) who had a small part, but every time he and Carell were on the screen together it was hilarious. Zachâ€™s character had the ability to control minds, but the only mind he had control over was Carellâ€™s character. It was really stupid, but I laughed every time. Then the grand finale, the actual dinner which takes place towards the end of the movie is nonstop funny. The sheer stupidity and idiotic nature of the scene will have you laughing out of your seat. The movie was a remake from the 1998 feature â€œLe Diner de Consâ€ (The Dinner Game). I have read some tidbits about the original and there have been a lot of changes in this one from its original counterpart, but I havenâ€™t seen it so I canâ€™t say if this one is funnier than the first. I can say that I wasnâ€™t disappointed, and I had a good time laughing at the misfortunes of others, and thatâ€™s what this movie was all about. I gave the movie 3 idiots out of 4. Itâ€™ll definitely get you laughing even if while youâ€™re laughing, youâ€™re thinking, â€œboy thatâ€™s a sad life to haveâ€. The movie runs 1 hour and 50mins. Itâ€™s rated PG-13 for sequences of crude and sexual content, some partial nudity and language. It was written by David Guion, Michael Handelman, Cinco Paul, Ken Daurio, Jon Vitti, from source material from the feature film: â€œLe Dinner de Consâ€ by Francis Veber. It was directed by Jay Roach. It was produced by Spyglass Entertainment Holdings, LLC, Parkes/MacDonald Productions. It was distributed by Paramount Pictures.

Alone on a hill, the man with the foolish grin is keeping perfectly still â€“ The Beatles (The Fool on the Hill)
Next weekâ€™s review: TBD