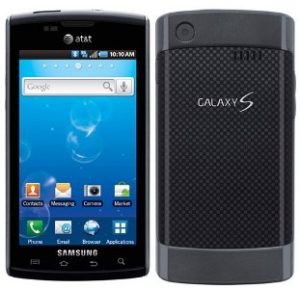 So we picked up the Samsung Captivate bright and early last Sunday on launch day and I have been using it since then all last week. Now it is time to sit down and talk about what I think of this latest AT&T Android device. Make no mistake this is a high end Android device and despite some meddling by AT&T, this still make for a very good Android phone, so let’s dive in!

Style
We always have to start off with style, for this is what we are about and the Captivate doesn’t disappoint. Funny enough when I see the Samsung Captivate in pictures and even at the media event they had in New York, I wasn’t really too impressed with it. It wasn’t until I got it that definitely had a change of heart. The Samsung Captivate is one sleek piece of hard. Glossy piano black and a beautiful screen on the front, and a nice brush metal back with a carbon fiber pattern. It is squared, but adds a curvy aspect to it’s square design. Speaking of the screen the Super AMOLED is beautiful!. It looks good in clear sun light and phenomenal when watching movies. I encoded Avatar as well as some other movies to test out and you would swear you was watching an LCD HDTV screen in your hands! It looks that good! As for the rest of the look, it is very slim, and very light. Feels good in your pocket and is very easy to use in hand.

Experience
[singlepic id=670 w=320 h=240 float=right]Using the Samsung Captivate is similar to most of the other Android devices out there, so if you have used Android before, then you have a shorter learning curve than most. The Captivate runs on Android 2.1 (though Samsung has said 2.2 is coming soon) and is overlapped with Samsung’s TouchWiz UI. TouchWiz UI isn’t bad at all, just prior to using the Captivate I had used the HTC Aria. Using the Aria got me use to HTC’s SenseUI, so I did miss some of these features going to Samsung. One thing I wasn’t use to is with the Captivate in the Application folder instead of scrolling up and down to view your apps, you go left to right, it is a minor thing, but I prefer up and down.

Performance on the Captivate is smooth and speedy for the most part thanks to it’s 1Ghz Hummingbird processor. I do notice the stutter or slight lag here and there, but for the majority of the time, it is smooth speedy sailing. I do have to note that AT&T has meddle with this device and crippled a cool feature on most Android device, which is side loading apps. However I’m delighted to say that correcting that issue isn’t too complex. I was able to root my phone in 2 minutes and after figuring it out, change that setting. So now I’m able to side load apps with easy. I know other sites in their reviews have that as a bad mark on the Captivate, but I won’t on here. Why, well it isn’t the Captivate’s fault and it is quite easy to fix making it a no issue. So if you don’t have know how or want to bother with it yourself, find any tech savvy kid and they’ll be able to do it for you.

[singlepic id=679 w=320 h=240 float=left]I can’t conclude the experience part without talking about the media aspects. The music player, I’m not to excited about. I mean it gets the job done and I’m sure there is some app for that in the Android Market, but it left me wanting more. The coverflow like way of going to little CDs looks nice, until you realize you are doing that for each song instead of maybe album. On the flip side, watching movies (and I can assume TV shows encoded well) was a dream. Now only was it like I was watching a pocket size 1080P HDTV in my hands, but when you plug in a pair of headphones, you can turn on simulated 5.1 surround sound. This made for a great movie watching experience that to me is unmatched on any phone. We just got the iPhone 4 in, so well load up the same movies on there for a head to head.

To close you can get this from AT&T for 199.99 without the trouble of a mail in rebate. So if you on AT&T and want to go Android, this is the droid you are looking for. If you are trying to device on either iPhone 4 or Android, it will no longer be a easy decision!