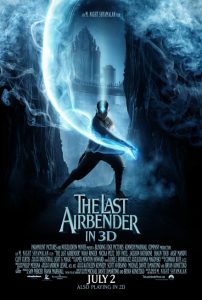 The Last Airbender came out this week after high anticipation for its release. The live action film is based on the cartoon, Avatar: The Last Airbender. The story is about four nations, Air, Water, Earth, and Fire and the balance between them. The Fire Nation has launched a brutal battle against the other nations that has gone on for 100 years. The reason being is that the Avatar, who is the sole controller of all four elements, disappeared a century ago, and he was the only one that kept the Nations at peace. When a young girl named Katara (Nicole Peltz), who is the last water bender of her tribe and her older brother Sokka (Jackson Rathbone) are out looking to catch fish on an icy river, they discover a glowing orb. Katara breaks the orb open and finds that it contains a young boy. When the boy awakes, he tells them that his name is Aang (Noah Ringer) and that he is from the Air nation. When the Fire Nation discovers that a great power has been unleashed they assume it can only be that of the Avatar. Prince Zuko (Dev Patel) who is from the Fire Nation and has been banished by his father King Ozai (Cliff Curtis) believes if he can bring the Avatar back with him, he will gain his fatherâ€™s respect. He and his uncle Iroh (Shaun Toub) capture Aang and discover that he has the power to bend air. Once Aang discovers that they intend on keeping him as a prisoner he escapes. Katara and Sokka take him back to where the Air Nation once lived, to show him that all of the Air Benders have been eliminated by the dreaded Fire Nation and that he is the last of his people. Meanwhile the Fire Nation has sent their own troops to capture the Avatar, lead by Commander Zhao (Aasif Mandvi) and they are on their way to launch an attack on the Water Nation. Aang not having any other bending abilities other than air is in a race for time to learn all of the elements and take his true role as the Avatar and bring peace back to the nations. Will he be able to learn all of the skills in time to take on the evil Fire Nation, or has his return come too late.

I have watched the whole Avatar series and it was one of the best cartoon stories I have ever seen. Each season was titled after the book element that it represented. This movie was filmed to be Book One: Water. Now when I heard about two years ago that M. Night Shyamalan was writing and directing this to be a full length live action movie, I was a little worried that he would mess up a great story. Well thatâ€™s exactly what he has done. He butchered this movie so badly. This was a story that should have been drawn out and stretched so that it could be told the way it was represented in the cartoon. He basically condensed a whole lot of pieces into 1 hour and 43mins. This was a disaster. Like the â€œLord of the Ringsâ€ Trilogy each one of these chapters should have gotten close to 3 hours worth of film. This was his one time to make an epic series of movies and heâ€™s already starting off horribly. Characters were introduced that shouldnâ€™t have come out until the next chapter. He made all the characters different races which were not the way it should have been. He basically filled 1 Â½ seasons into 1 movie. Iâ€™m not a big fan of Shyamalan and I fill he hasnâ€™t made an interesting movie since â€œThe Sixth Senseâ€, his very first. If he would have took his time and made this the right way he could have been the next Peter Jackson of fantasy movies. Instead he seemed to rush it along and thats how the viewers who know the story are going to feel. Yes, the effects were ok, but itâ€™s the story that keeps people interested in wanting to see the continuation. All this movie did was make me want to watch the cartoon all over again, but I know if I do that, then when the next chapter comes out Iâ€™ll be waiting to trash him even more. 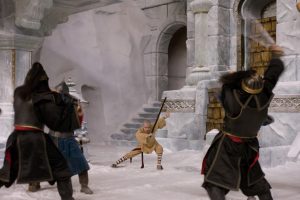 Hopefully from the bad feedback of this rendition, they will decide to let someone else write and direct the next one. Or better yet, let someone else remake this whole story all over again and give it its proper respect. Then there was no reason for this to be in 3D. I donâ€™t remember any scene that actually used the effect. Hollywood is getting to be really ridiculous with this whole 3D stuff. Itâ€™s going to end up like in the 80â€™s, when people just stopped going to see anything that had 3D in the title. If youâ€™re not making a 3D movie from the very start, like in Avatar (James Cameronâ€™s movie) then stop turning these finished films into 3-dimensional just to get the extra $3 bucks. I walked out of this movie feeling really let down and disappointed. I can only give this movie 1 Â¼ of an element out of 4, and thatâ€™s for the effects alone. This film should have been thrown in the air, burned, soaked, and beaten with a rock. Then it would have truly represented the elements. The movie runs 1 hour and 43mins. Itâ€™s rated PG for fantasy action violence. It was horribly written and directed by M. Night Shyamalan from source material from characters by Michael DiMartino & Bryan Konietzko. It was produced by Nickelodeon Movies, which they should not have let this go out. It was distributed by Paramount Pictures.

If youâ€™re going to pay homage to something, you should show it more respect. Ezo
Next movie review: Twilight: Eclipse