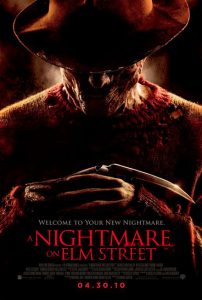 No, youâ€™re not dreaming, Freddy did come back to theaters this past weekend in the remake of â€œNightmare on Elm Streetâ€. For those who have never seen an Elm street movie hereâ€™s a brief description. In a small suburban town, a group of teenagers start to have nightmares of a disfigured man named Freddie Krueger (Jackie Earle Haley) who wears a glove with razor sharp knives on the fingertips and hunts them in their dreams. While in their dream state they are vulnerable and if he kills them in the dream, they die in their sleep. All of the victims have something in common, but they canâ€™t figure out what it is, and why this man is hunting them one by one. Do the parents of these teens hold a gruesome secret? How will they be able to stop a killer that only appears when they fall asleep?

Now with that out of the way, let me say that I was a big fan of the original Nightmare on Elm Street back in 1984. Even the sequels were good up till maybe part 3, and then it got kind of silly and cartoonish. This remake is basically just a way to give the franchise a new life with a new generation of teen movie goers. They stayed true to the story and this time told why he was after these kids in the very first installment. Yes, Mr. Krueger was a child molester, and the parents in this small town should have had him arrested. They instead took justice in their own hands and burned him alive, and now he seeks revenge. What I liked about this telling of the story is that they actually incorporated as to who those little girls were that the teens would see in their dreams jumping rope and singing. The dream sequences were ok. I think having seen so many N.O.E.S. movies that my judgment was tainted and it just didnâ€™t give me the trill anymore. Plus they didnâ€™t really use anything new.

Some of the scenes had been done before in earlier Freddie movies. Jackie Earle Haley did a good performance as Freddy. They didnâ€™t make Freddie comical like he turned out in later sequels of the original. He was just mean and sinister and bent on revenge. For a remake I have to say that at least they didnâ€™t mess this one up. I can only give this movie 1 razor tipped finger out of 4 though. It could have been a lot scarier, and they should have come up with some new dream scenes instead of just rehashing the old ones. I do give kudos to the last scene of the movie. I think the update was superb, and to no surprise that we have not seen the last of Freddie Krueger. The movie runs 1 hour and 37mins. Itâ€™s rated R for strong bloody horror violence, disturbing images, terror and language. It was written by Wesley Strick and Eric Heisserer. It was directed by Sam Bayer. The film was produced by Platinum Dunes. It was distributed by Warner Bros. Pictures Distribution.

If youâ€™re having nightmares, just remember itâ€™s only a dream, or is it?
Next weekâ€™s review: Iron Man 2