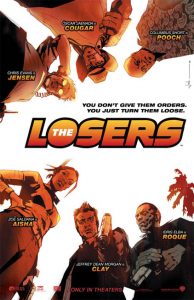 In the movie â€œThe Losersâ€, an elite U.S. Special Forces unit is sent to Bolivia on a search and destroy mission, by a contact only known as Max (Jason Patric). When they call in an airstrike, they soon discover that there are children present at the destination. They try to talk Max out of going through with the bombing, but he doesnâ€™t care. So the team of Clay (Jeffrey Dean Morgan), Jensen (Chris Evans), Roque (Idris Elba), Pooch (Columbus Short), and Cougar (Oscar Jaenada) decide to go in and rescue the kids before the fighter plane gets there to bomb the location. After they send the kids on the helicopter that was there to extract their team, the copter too is blown up in the air as it tries to leave. They soon discover that they were not meant to leave Bolivia, and have been betrayed by Max. Now presumed dead and with no way back to the states, they are stranded in the country.

Clay the leader of the team meets up with a woman named Aisha (Zoe Saldana),who offers them a way back home in return for helping her kill Max. Together they come up with a plan to find Max and stop him from getting his hands on a new type of weapon, which he wants to use to start a global war. Itâ€™s going to be very hard to get to Max because he is heavily guarded and his top security person Wade (Holt McCallany) is also an ex-special forces agent, who knows the team quite well.

This movie is a screen adaptation from a comic book series of the same name. There are an abundant amount of movies being made from comics that have huge followings, but that doesnâ€™t mean itâ€™s going to be good as a movie. This is a prime example. This flick was just too cartoonish, in its action and dialogue. The banter between the characters was very campy, and that just made the action kind of over the top. Jeffrey Dean Morgan, who was in â€œWatchmenâ€, just didnâ€™t have that leading man vibe. Idris Elba seemed like he was struggling through the movie. Then there were Columbus Short and Chris Evans who seemed like they were added for comedic support. Their characters at least kept me laughing from time to time. Zoe Saldana was pretty bad as the mystery woman who wanted to help the team, I just wasnâ€™t buying it. There was one shining role, that of Jason Patric as the evil Max who wanted to rule the planet. His character was way over the top, but it was in a funny way. I mean who shoots a woman, just because she couldnâ€™t hold an umbrella directly over your head. Hilarious! 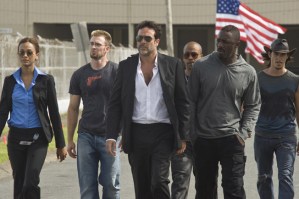 Now here is the funniest part of the movie. Thereâ€™s going to be a sequel! Now Iâ€™m not sure if this movie is going to generate the amount of publicity it needs to actually get the studios to do a part 2. If not, then we are left with an unfinished story at the end of this one. I say look for the second feature to come out straight to DVD. I have to give this movie 1 bullet out of 4. It just didnâ€™t grab me. Iâ€™m sure as a comic book, it was a fun read, but as a movie this sucked! The movie ran 1 hour and 38mins. It was rated PG-13 for sequences of intense action and violence, a scene of sensuality and language. It was written by Peter Berg and James Vanderbilt from source material from the comic book by Andy Diggle. It was directed by Sylvain White. Produced by Weed Road Pictures, Film 44, DC Entertainment, Dark Castle Entertainment. It was distributed by Warner Bros. Pictures Distribution.

In war, whichever side may call itself the victor, there are no winners, but all are losers. Neville Chamberlain

Next weekâ€™s review: A Nightmare on Elm Street.