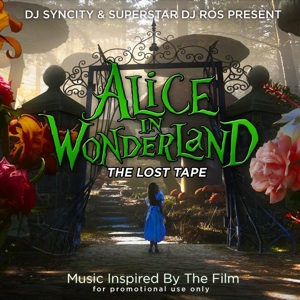 Celebrity DJ SynCity & Superstar DJ ROS partnered together to create an unofficial â€˜soundtrackâ€™ completely inspired by the Disney blockbuster film Alice in Wonderland, as directed by Tim Burton and released in theatres March of this year.

The official title of the compilation is â€œAlice In Wonderland: The Lost Tapeâ€> It’s dubbed as a groove infested sonic ride through Wonderland-making it very appropriately titled. Their goal was to simulate what a house party down the rabbit hole would sound like. The collabo features music by Madonna, Nelly Furtado, Wynter Gordon, Michael Jackson, Lady Gaga, and The Yeah Yeah Yeahs (just to name a few).

I was feeling the creative direction of the album and flow throught the first 2 songs Wynter Gordon-Alice in Wonderland and Lauren Flax ft Sia-You’ve Changed. The 3rd song in was Kylie Minogue-Love at First Sight this stuck out like a sore thumb to me and interrupted the flow. From this point of the album on the songs began losing my attention. This continued for the next few tracks that followed, not because I don’t like the songs chosen (which includes Estelle feat Kanye-American Boy) I just would not have necessarily put certain songs on the same mixed tape or in that particular order. I think at one point it begins to veer away from the initial vision. Luckily it eventually picks back up from where it began with several more musical jewels.

This album had more of club music/techno vibe to it, which, admittedly isn’t what I would normally listen to. I did personally get turned on to several new artists and added a few songs to my personal ipod that I may not have normally come across. Having checked out their websites they don’t seem to have a particular musical specialty. Creatively, I am feeling the concept and if I was ever lucky enough to be at a party that either of these spinmasters were playing I am positive I’d dance all night.

â€œThe Lost Tapeâ€ is expected to be the first in the new â€œSoundtrack Seriesâ€ collection of branded mixtapes to be released by the two popular DJs. Seeking inspiration from any and all sources in pop culture, SynCity & ROS promise to keep the creativity flowing by letting these varied muses inspire the sound and themes of their future bi-coastal mixtape collaborations.

For more info on DJ SynCity you can check out her website at
www.djsyncity.com and to catch up on Superstar DJ ROS check out www.myspace.com/superstardjros

You can also listen to or download the album for free at djsyncity.com