Today is the day when some of you will be lucky enough to grab Rim’s Official twitter app, which is still in private beta and was leaked today to the masses. As you might know, Rim has been working on a native twitter app for months now which is said to take advantage of push notifications. Well, I had a chance today to download the leaked app this morning and have taken the time to grab numerous screen shots for your view pleasure as well as some observations and criticisms of the app. It’s not the best twitter app out there, but it’s also not the worst and it actually does some pretty neat things. 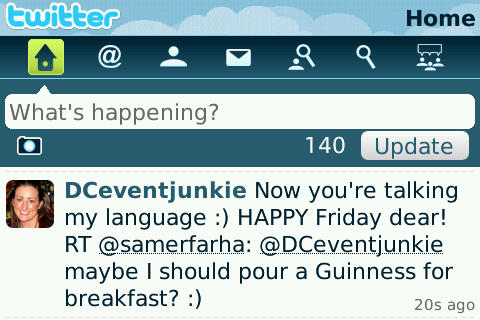 When you first start off the app, you are greeted with the home screen. If you’ve used the Rim Facebook app before, this layout is pretty familiar as it is very similar to the Facebook app layout. It’s a pretty clean layout, although, I really wish there was some way to adjust font sizing as the default font size is way too large meaning I only see maybe 1 or 2 tweets at a time on the screen. 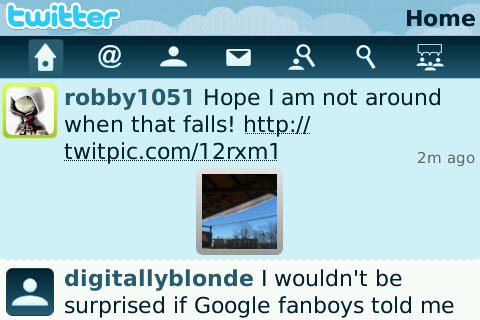 If you notice above, the twitter app actually shows a thumbnail of twitpics that users attach. I’m not sure if it will show an inline image if it comes from any other source however as I was not able to test that portion. If you click on the image, you can even enlarge it to full screen. 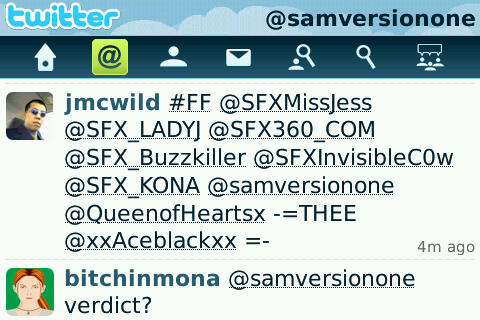 This is the @reply tab. Its standard affair. Shows you all the replies and mentions of you on twitter. Again, wish the font was smaller. 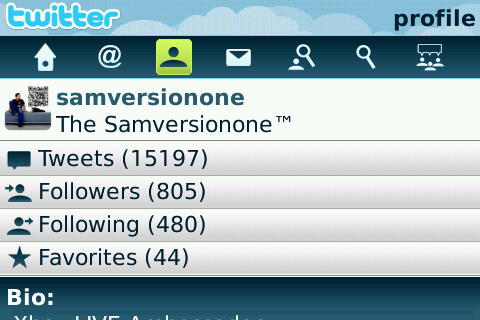 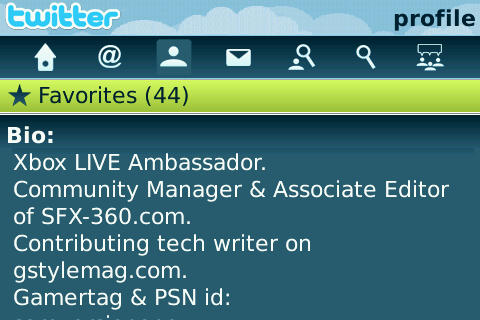 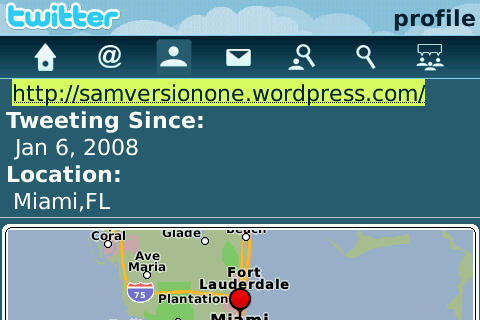 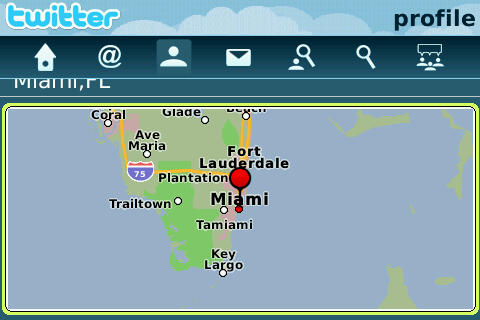 This is the profile tab. As you can see, there is actually a lot of information going on in this tab. This tab shows you your information, but if you click on any user, this is the same tab you see as well. Here we get all the relevantÂ  user information. We can see how many total tweets we’ve had, followers, following, and favorites.Â  I also like the fact that there is a “Tweeting Since:” section. Good to know I’ve been on twitter for over 2 years. A nice touch is the map of your location. The one thing I do not like about it though is the amount of space this tab uses. You have to scroll down a few times to see everything. They could have probably laid it out better, but that’s just a minor detail. 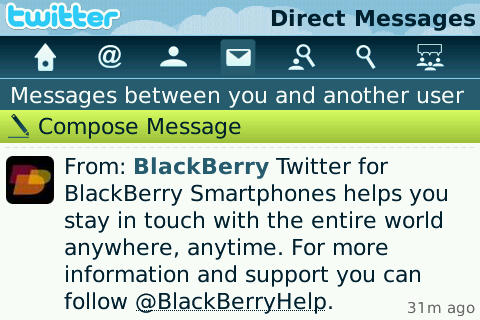 Direct Message tab. Pretty much the same as the @reply tab. When you first open this tab, it grabs every single direct message you have on twitter. I don’t know about you, but I rarely ever delete any of my DMs. This might cause a small issue with some of you if you have it linked to your BlackBerry Messages App as it will show every single DM in there. Thankfully, you can however delete the DMs from the BlackBerry Messages App and it wont disappear from the twitter app.Â  One little tidbit that you might find very interesting is that when you are composing a DM, the app actually autofills names for you! It seems to be able to pick up users to autofill from your updates. Very cool. 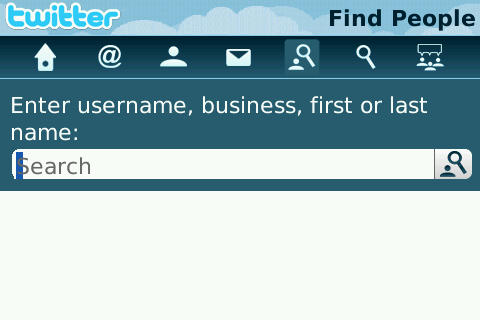 This twitter app also include a nice search feature to find people and businesses who might be on twitter. Handy function if you are trying to look for someone new to follow. Just for giggles, I did a search for Tila Tequila and found literally hundreds of different Tila Tequila accounts. Which one is the real one? Well, Rim did a pretty cool thing here too and added the little verified person icon on the real Tila Tequila. Just for your info, I did not follow her as she’s not all there sometimes, if you know what I mean. 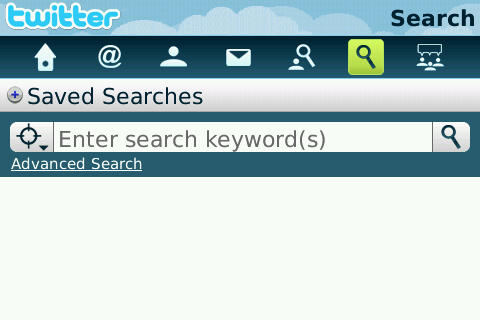 This is another search tab that Rim included. This time, its to search for anything. You can even save searches for later viewing. Take note of the little icon on the left that looks like a location icon. Well, it is. You can actually perform searches with location filters within 1 mile of your current location. I’m assuming Rim uses either cell tower location or your GPS location as I did not see a setting to choose between the two. 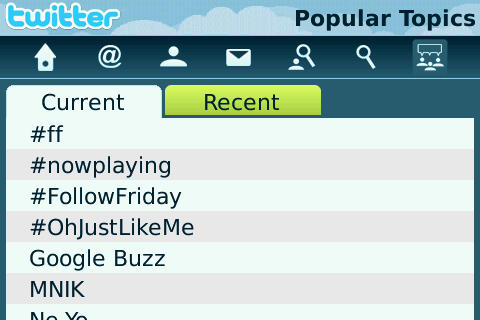 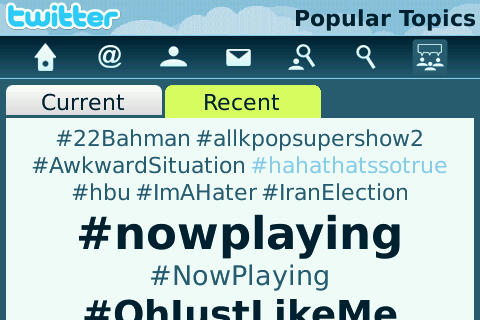 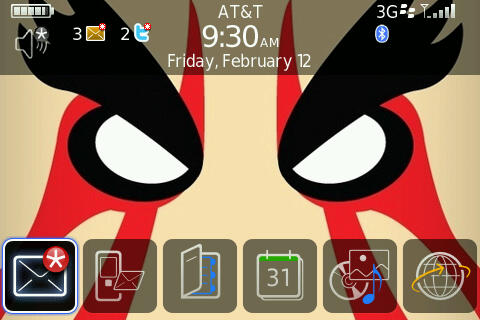 Moving on past the app, we get to see how much more this app integrates into the BlackBerry. If you look up top, the app displays a notification when it receives new DMs. Notice I didn’t say mentions / @ replies. Seems like the notifications only alert you to new DM’s and not mentions or @ replies. This might be a good thing as DM’s are usually more important then @ replies are? Notice also that the BlackBerry Messages app also displays a notification as I have the twitter app integrated with the messages app. (If you are wondering, that is E. Honda from Street Fighter as my background image. He’s watching you.) 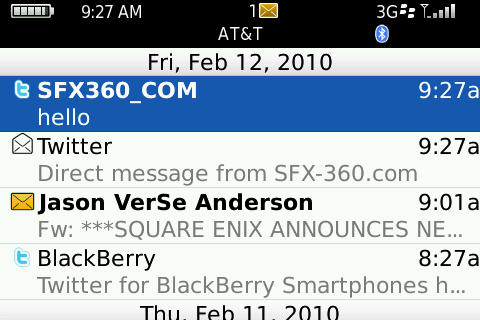 Clicking the Messages app brings you to your inbox where you see DMs mixed in with your regular emails. I actually like this as DM’s I would consider to be a form of email anyways. Plus, they are timestamped with when you receive them. Also, it is all pushed to you by Rim so you will get the messages quickly and on time. I tested out the app notifications with the ones that twitter usually emails to me letting me know of a DM and they pretty much arrive simultaneously. Very good to know that the Push service works for it. The one thing that is neat though is that you can actually go into the Messages App and compose a tweet or DM direct from there instead of opening up the twitter app. It’s a pretty nice shortcut if you just want to tweet something really quick. Note however that autofill does not seem to work on regular tweets, only DM’s. 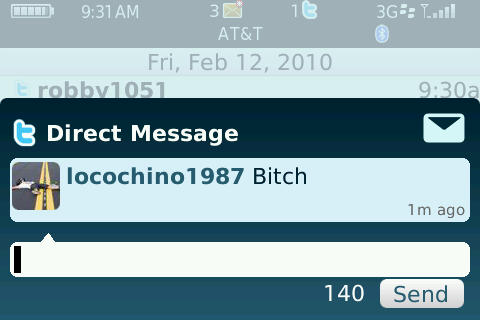 When clicking on a DM, you are greeted with a pop up from the twitter app. It allows you to only reply to the DM and send it. I do like the fact that I don’t need to go into the twitter app to do any of these things.

Conclusion: Since this is still a beta, and a leaked beta at that, I can’t really give a full judgment on the app as certain quirks might be fixed when the final app is released. What I can tell you though is what I do see has lots of potential to be a very good twitter app. It’s not as full featured as something like Ubertwitter for instance, but for a first attempt by Rim, it is very good. The things I do like are that it integrates with your Messages app so you can stay on track with DMs. Because DM’s are pushed to you, they arrive instantaneously. I also like how you can compose a tweet or DM straight from your Messaging App when you want to write something quickly. The layout of the twitter app is also very clean although I’d like to see them use smaller font and maybe use the space a little better. I would like to see Rim add a keyboard shortcut so I can bring up the app quickly without having to go through my list of apps to find it as it does not close to the background when you close the app.

If you are a light twitter user, Rim’s official Twitter app is perfect for you as it does everything you would need a twitter app to do. It’s also very simple to use with a few pretty decent power features. However, if you are a heavy twitter power user, it might not have everything you want. For me, it makes a pretty good secondary app that would compliment a app like Ubertwitter. Socialscope, or Seesmic.

In the end, I do encourage all BlackBerry users to at least try the app. It is free so you have nothing to lose.