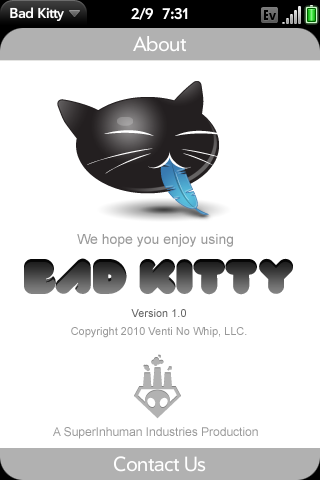 SuperInhuman Industries has just introduced Bad Kitty for WebOS into the App Catalog. It’s the new kid on the block in terms of Twitter applications for WebOS and it immediately caught my attention from the name alone; I’m simply enamored with it. How clever to think outside the box and not use the conventional terms for twitter clients like adding a “TW” or the word Tweet or something commonly associated with Twitter. This company has done something unique by thinking of dominating Twitter and using a Bad Kitty as it’s brand. I simply love the creative vibe that they give and it’s demonstrated in not only the name but in other aspects of the actual Twitter client.

At first glance you will notice that Bad Kitty is rebellious. The basic application menu is written in a non traditional way. It’s positioned vertically as opposed to horizontally.Â  This can be a bit daunting because it’s so different but I think it adds character and really sets the app apart from anything else that I’ve used. If nothing else it’s stylish. I also like the fact that I can see the number of new tweets for my main timeline, mentions, and direct messages at a quick glance on start up. This is really nice and convenient.

Bad Kitty continues to show it’s funky side by having a different layout for the timeline as well. Twitter avatars are placed on the right as opposed to the left which seems to be the trend among most Twitter clients, at least for WebOS.Â  The avatars also appear different because they have what I can only liken to a heart monitor graph symbol or an inverted carrot symbolÂ  cutting into the image. But in all honestly I actually prefer to see a user’s full twitter profile picture. This method cuts into people’s faces and is sometimes annoying. I like the idea of an accent but perhaps a different option is in order.

Another new feature is the sub-menu that appears when you click on an individual tweet. This is a feature that I love. It really takes advantage of the fact that screen real estate is important and buttons really clutter the look of a Twitter client. To be able to tap and bring up all of the functions that a user needs is a nice touch. This is a very similar approach to what Tweed does and it’s quite useful. But there is one button that I’m confused about which is the “more” button. When I click on this it just takes me to the post itself but there is no additional functionality once on this screen. I don’t really see a point of it and so it makes it quite confusing as to why it’s on the sub-menu in the first place. Maybe I’m just missing something.

Focusing on the main timeline view, the Refresh and New Tweet options are somewhat hidden until you press a button to expand.Â  This too gives the app a nice clean look but is somewhat annoying for me because I’m constantly refreshing and I want quick access to that feature. 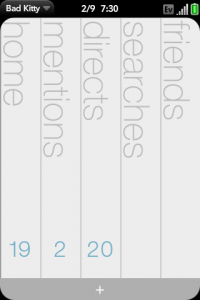 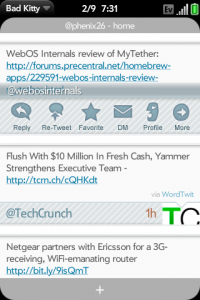 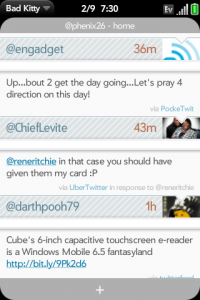 There are two features of Bad Kitty that I love. One is saved searches which is awesome because I love to keep an eye on particular topics (ie. Palm Pre). What would be even better is if the app allowed for saved searches in a new card. That would really functionality that I know a lot of users would appreciate. The second feature that I adore is type to tweet. This simply lets you just start typing your new update without having to click any additional buttons which is nice. 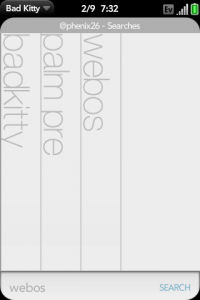 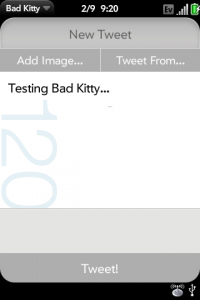 But Bad Kitty admittedly is missing some features and must act quickly to really satisfy the just above average Twitter user’s needs. Below is a list of the features that I would like to see added.Â  It is by no means exhaustive because I know that there are people who use Twitter in different ways than I do. But here is what I would want:

Overall I have to say that Bad Kitty is off to a decent start. Right now it won’t replace Tweed for me but the developers say that they will release updates frequently. I think that this program should get better with time but for now it’s really quick, has some nice features and does the very basics that we want in a Twitter client. I can send a tweet with a photo attached, it automatically shortens urls, I can send and view my direct messages and view my friends and followers. It gets the job done and I am eagerly awaiting changes and new features.Â  But definitely kudos to SuperInhuman Industries for being different. Please keep up the innovation.