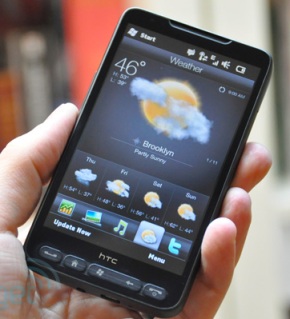 We all remembered when the HTC HD was announced and we all thought this would have been the perfect first Android phone from Google and HD, but instead we got the G1. I remember being on Twitter and seeing the HTC twitter account response to repeated questions about that. I even talked about it here, where I said this was the first true potential iPhone killer in style only though.

I said style only before, it HTC HD was running with Window Mobile software and I hate the look of it with a passion. Now had the HTC HD with Android, oh man that would of been the phone to get. So here we are with the HTC HD 2 and again no Android, but Windows Mobile again. I swear this thing better be coming with Window Mobile 7 and even then I don’t think I’m going to like it. What is up with this, what Android can’t work with a Touch HD?

On another note, um is HTC going backwards. Take a look at the HTC HD I mentioned here and then look at that HTC HD 2. Why is the HD 2 uglier to me than the original? Your suppose to improved on the previous model. If I was a orginal HD owner, why the hell would I want to upgrade to that? Let’s get it together HTC, you make some good looking phones, let’s now start slipping!