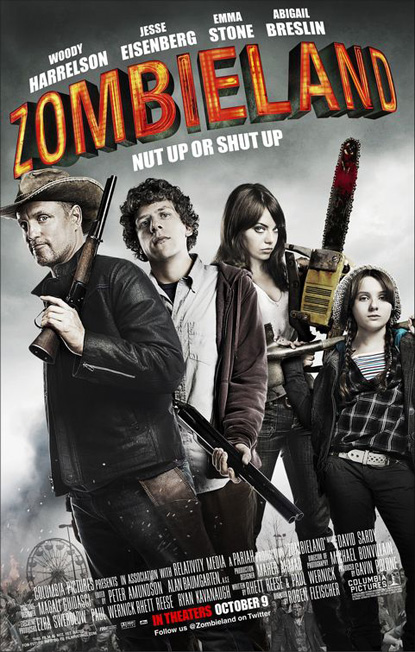 So I went to see this movie with high expectations. Iâ€™m a huge fan of Zombie movies and figured this one looked pretty interesting. In the film, Jesse Eisenberg narrates the story as it unfolds and he plays the character Columbus. He is a bit of a wimp, but has found ways to stay alive, against the zombie outbreak that has killed off almost everyone in the United States. On his travel to search for other survivors and possibly his parents who live in Columbus, Ohio, he meets Tallahassee (Woody Harrelson). Now Tallahassee is a no holds barred expert zombie killer, who enjoys what he does best, killing zombies.

The two team up to travel the states, heading west in search for anyone still living. They run into two sisters on the way and just like how they have named themselves after where they were born, they call the girls Wichita and Little Rock (Emma Stone and Abigail Breslin). Now the four of them must travel together, if they want any chance at surviving theyâ€™re trip out west. The problem is can they all get along for such a long trip, while battling zombies at every turn. Welcome to Zombieland.

Now Iâ€™m going to make this a short review, because frankly the movie is very short. This movie is a fun filled trip through the states, while killing the occasional zombie here and there. Itâ€™s not scary in the least bit, and frankly I donâ€™t think that was the writerâ€™s intention. What you have here is a road trip filled with zombie occurrences. The travelers seem to never really be outnumbered by the zombies till the climatic ending at the amusement park, and even then itâ€™s nothing for our â€œzombie killerâ€ extremist, Tallahassee. This movie is having so much fun with zombies, that they even incorporated a cameo by Bill Murray who has also survived the zombie takeover. He plays himself in the movie and for 10mins or so is glorified by our group of travelers. At no time in this movie did I ever think that any of our travelers would get killed, or even bitten. It just wasnâ€™t that type of zombie movie. This is a zombie movie that basically just pokes fun at zombies, and gives you instructions on what to do if such a thing was to ever happen. Itâ€™s all gun shooting, blood splattering, zombie killing from beginning to end. I give this movie 1 Â¾ zombies out of 4. It was too short, and there is just so much zaniness you can do with zombies before it gets kind of boring. The movie runs 1 hour and 22 mins. Itâ€™s rated R for zombie horror violence/gore and language. It was written by Rhett Reese and Paul Wernick. It was directed by Ruben Fleischer. It was produced by Pariah, Relativity Media. It was distributed by Sony Pictures Releasing.
Reviewed by Eric Williams

We have all woken up feeling like zombies at some point in life, itâ€™s called a hangover. Ezo
Next review: TBD