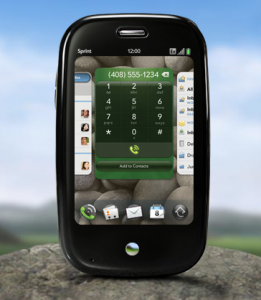 I’ve been a Pre owner since day one (6/6/09 bright and earlier) and I neither have buyer’s remorse nor am I looking at another phone to replace my Pre as my primary device.Â  This is mainly because of the Pre’s very active homebrew scene. For those of you who are unfamiliar with homebrew that just simply means that Pre users as a community have essentially taken it upon themselves to hack, patch, tweak and create all sorts of wonderful additions to the phone.Â  The Pre is a great device to begin with but as expected with any 1.0 device it lacked a few things that most phone junkies have come to appreciate.

Some of those basic features that are missing include, sms forwarding, call duration in the call log, and third party applications.Â  So while loyal Pre fans are waiting on Palm to address some of these missing features and update their app catalog, many have decided to step-up to the plate and address some of these issues on their own.

Just to give you some perspective of what’s been happening, here are some numbers to ponder.Â  While the official Palm App Catalog has less than 100 titles under its belt, the Precentral homebrew App Gallery has a whopping 204 apps (as of today 9/12/09). In the homebrew app gallery there are a number of games, utilities, calculators etc that really make owning a Pre even better.

Here are some screenshots of some apps that you won’t find in the official app catalog YET (Palm has been doing a great job of approving apps and so a number of homebrew apps have graduated to the App Catalog recently). 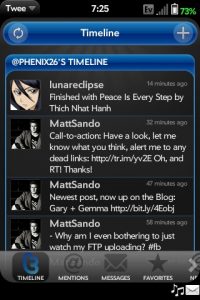 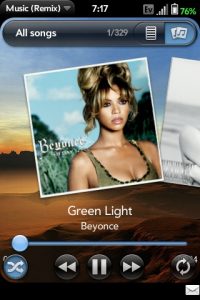 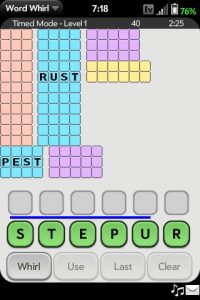 The first app Twee is a twitter client that has a really slick interface and some additional features that the two twitter clients in the official app catalog are missing.Â  The second app is called Music Remix and it does a great job of adding some much needed features to the original music app on the Pre (for example the slider to scroll through a song, the ability to easily move back and forth through menus and customizable backgrounds).Â  The last screen shot is of a fun game called Word Whirl.Â  I’ve seen this game in the Apple App Store in a number of variations and it works just as well in this version.Â  This game is addictive and is a must have for those who like to kill time during their daily commute.

There are also tweaks and patches that have also appeared as a part of the Pre community’s effort to fix some of the deficiencies that the Pre has. 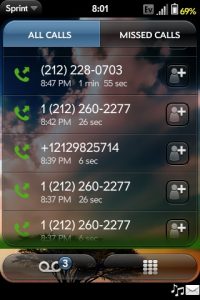 The screenshot above is of my call log that shows off several tweaks that I added to my phone.Â  One is the ability to change the background of the phone app to anything that I want.Â  The second is the call duration for each call is now listed.Â  And the third is in the top right hand corner.Â  There is now a percentage indicator next to the battery that shows how much charge I have remaining.Â  Performing these simple tweaks have really done wonders to making my Pre much more enjoyable.

In this article I have only covered but a fraction of what’s available in homebrew.Â  In future posts I plan on covering more apps in depth but this was just a general overview.Â  If you are interested in adding more apps and customizing your phone please check out this forum at Precentral.net. Adding applications to your phone is really simple but I must say that doing so is not recommend for the faint of heart or for those that don’t know what they are doing.Â  But if you can follow directions and are willing to take the time to do so then by all means what are you waiting for?!Â  One last word of caution though, if done correctly you will only fall in love with your Pre all over again and this addiction is one that is NOT easy to break.Â  Enjoy!.