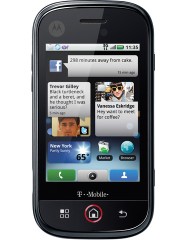 It has been quite awhile since we have talked about a Motorola device here on G Style. Motorola had seem to fallen off since their heydays. Back when regular phones and even feature phones were the rave, Motorola use to pump out phone after phone that was hot. Not so much though when it came to the smartphone game. Yes they had a little something with the Moto Q series, but beyond that, not so much.

Glad to see they haven’t died a slow death just yet, as today they announced the Motorola Cliq with MOTOBLUR. This will be Motorola’s first Android device and it is a looker. Personally I use to love Motorola phones back in the day, just have a look at my profile on GDGT.com and you’ll see quite a few Motorola phones listed there in my Had list. So it is good to see Motorola finally release something hot in the smartphone arena! Motorola is dubbing this phone “the first phone with social skills” and it will be coming out on T-Mobile (seems like T-Mobile is the home of Android doesn’t it) in the 4th Quarter of this year. It will come in Winter White and Titanium, have a 320 x 480 screen, 3G, WiFi, and a 5MP camera that does 24fps video. Not bad spec wise huh! No word on pricing yet, but maybe some more as we get closer to the Holidays!

Check out some images, from one of our new favorite sites GDGT.com