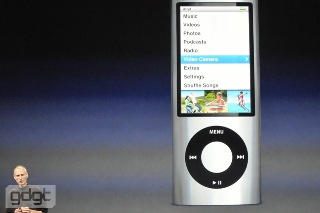 Ok look, nothing against the iPod Nano, it is a really cool player, we even gave one away here on G Style, but this is the iPod that gets the camera! Worse off they went and put it on the bottom of the player, um why the world would you do that? I can only imagine the people who will buy this thing and will be trying to awkwardly try to record themselves as they go against the nature way they would hold the Nano lol.

Ok enough griming about the fact that they put the camera on the Nano, this generation of the iPod Nano has gotten some cool features. Some of these include a FM Radio (but again not on the iPod Touch, interesting indeed), which is something it took them forever to have, so that is a plus. It also has a pedometer, support for voice memos, and a bigger screen. Price points are now $149 for 8GB and $179 for 16GB. Would I buy this, I doubt it. The camera just isn’t enough to make me want to do a Nano vs a Touch, but hey if you have some loved ones this holiday season who don’t have a iPod yet, and you don’t want to go full out, a Nano should fit just right.