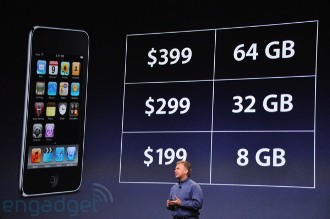 so unless you was under a rock, you know that yesterday was Apple “It’s just rock and roll” event. They announced the iPod Touch 3G with a new price point for the 8GB version. Now going for $199.00, this make a sweet price for anyone who wants to jump into the Touch.

It does suck that I personally just brought the 16GB version for $299.00 a week or so ago lol, and now they have a 32GB version for that same price. And new to the group is the bumped up 64GB version (not bad at all!) for $399.00 on the high end. Nothing has been really much for tweaks under the hood to the processor and it will have OpenGL 2.0 just like the iPhone 3GS. The one items we was hoping for, the camera on it, was left off. How do you feel about this, should the iPod Touch a camera? Sounds off, and let us know what you think. Also let us know if you will be picking up one of these 3rd Gen Touches, 64GB anyone?