Going into its second week of release is the comedy/drama â€œFunny Peopleâ€. The movie revolves around a famous stand up comedian named George Simmons (Adam Sandler) who finds out he has an incurable blood disease, and has less than a year to live. He meets a struggling comedian named Ira Wright (Seth Rogan), and hires him to write material for him. In the passing days to follow George tries to undo all of the selfish things he has done in his life since he became famous. One of which is cheating on his exâ€“fiancee Laura (Leslie Mann). Leslie is now married to a guy named Clark (Eric Bana), and has two daughters. The only problem is Clark too has cheated on her and she welcomes George back into her life when she hears of his illness. When George finds out that he has beaten his illness, he starts to reevaluate what is important in life. Has his new found look on life come too late to repair all of the things he took for granted?

Now when I first saw the trailer for this movie I was very excited that Adam Sandler and Seth Rogan were doing a movie together. I mean right now these are two of the funniest people in films. Then you add Jonah Hill (from â€œSuper Badâ€ fame) to the mix and you know this has to be a funny movie. Well all of my expectations were right. This movie is hilarious. Now of course from the writer & director of movies such as Superbad, 40 Year Old Virgin, and Knocked-Up, Judd Apatow there are a lot of juvenile jokes in the movie. I knew there would be and thatâ€™s why I was so excited to see this movie. The humor is vulgar, and crude, but that makes for some of the funniest lines put on film. His movies always tend to go towards the outrageous, but then always have a warm side to them also. In this particular picture you get to see a glimpse of a comedianâ€™s life outside of the jokes and cameras. Making people laugh is not always as fun as it seems. There were so many cameos from comedians playing themselves in this movie that I wonâ€™t even start to try and name them all. It made the movie feel genuine and real. These comedians go out every night to make people laugh, but in their personal lives they struggle with issues just like the rest of us. I will name one cameo that happens in the movie that was a big surprise to me. Eminem is in a scene and he has an encounter with Ray Romano that I thought was brilliant. 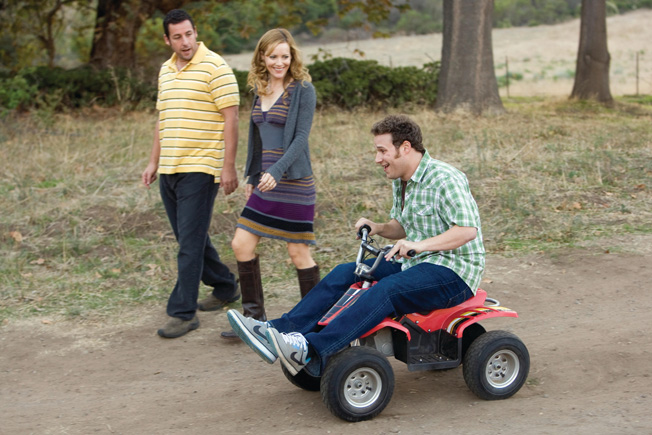 There were a lot of memorable laughs in this movie and just when you think itâ€™s slowing down, they throw in another penis joke and youâ€™re laughing hard all over again. For 2 hours and 20 minutes it was like I was getting a private look at Adam Sandlerâ€™s life as portrayed through this character George. I gave this movie 3 laughs out of 4. I definitely enjoyed it, and think anyone who is a fan of Judd Apatowâ€™s movies would enjoy it also. The movie ran 2 hours and 20mins. It was rated R for language and crude sexual humor throughout, and some sexuality. It was written and directed by Judd Apatow. It was produced by Apatow Productions, Happy Madison Productions. It was distributed by Universal Pictures.
Reviewed by Eric Williams

Life is too short; make sure you have some laughs on the way. Ezo
Next Review: G.I.Joe: The Rise of Cobra