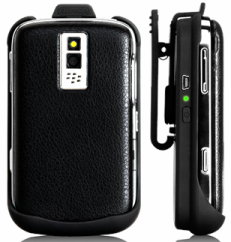 So this week we tested out the Blackberry Bold 9000 Fuel. Made by Case Mate, this is a combo Holster / Rechargeable Battery pack. It goes for $79.99 from their site and we wanted to put it through a real world test to see how much it improved our usage time throughout the week. We will do a couple of test to see if it really improves our time and then report them here, so let’s begin!

A normal day starts with the Blackberry be disconnected from the charger between 7:15 – 7:30am in the morning. A normal ending day for us can be anywhere from 12 – 1am. So this will be the time used for the test. The first test we tried was the keep it in all day test. With this test we decided that we would holstered the Blackberry whenever it wasn’t in use and see if we would have a good amount of juice left at the end of the day. So this would consist of using to check emails, IM here and there via BeeJiveIM, maybe a little Facebook app checking, and short conversations on Blackberry Messenger, no phone calls. This represents how I currently use my Blackberry. With this normal load, I would have to reconnect my charger at around 4:30pm and it would be 100% again when I headed home at 6pm. So this first test will see how the Fuel helps in this matter.

On this first time, the Fuel did a GREAT job. At stated disconnected the charger and left home at 7:30am. My day consisted of checking emails, using BeeJiveIM, and the some in and out use of the Facebook application, as this is how I normally use my phone during the day. I don’t use more since with the 3G, it would kill my battery even quick if I used more. So with my normal day, using the Fuel took me all the way passed 10pm with the phone itself still have about 50% batter power, at this point the Fuel was empty but since it has charged the phone I was able to keep going. In this cause it beat me as I got tired and fell asleep around 10:30pm, so on this test with the Fuel the Blackberry out lasted me! lol 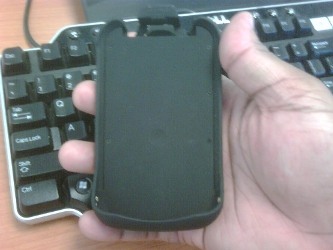 For the next test on day 2, I chose to keep my Blackberry out of the holster as much as the day as possible as this is what I do when I’m at work. I have the Blackberry on my desk for easy access and then usually around 4:30pm, plug it in to recharge as I’m usually down to 14-18% by this time.

This test yielded about the same results with the only difference being that when I popped the Blackberry into the holster at 4:30pm since it was down to 14%, while it charged up the phone, now the Fuel pack was empty. I could of just left it on empty and continued on my day, as the Blackberry had about 90% power from there, and so carried me to the rest of the night, something compelled me to recharge the Fuel again, as I had this never leave a fuel cell behind thought lol. Now as to not cheat, once the Fuel was full again, I turned the power off for the rest of the night and made it till 12am and still had power, again with the Blackberry out lasting me as I called it a night.

Finally for the last test day 3, I set out to push it to the limit! I would disconnect at 7:00am and then run everything, even stuff I would normally leave closed. So I would run BeeJiveIM (IM), Socialscope (Twitter), do Facebook status and use the Facebook app, check emails, be on Blackberry Messenger, and maybe even surf the web if I have time. Would it last till the end of the day like the first 2 test?

While the Fuel did do good on our intense test, it didn’t last as long as the previous days. Maybe this is to be expected since I was running data heavy apps like Socialscope, BeeJiveIM, and even briefly a video on the device. But 8pm I had about 27% percent left and I would say it would of took me till 9, 9:30pm before needing a charge. Now while this wasn’t as long as the other days, this is still great since I started at 7am, was in a full 3G area for 90% of the day and was running apps all day!

To wrap up, the Fuel is worth the price, actually maybe 20 bucks cheaper to $59.99 and that would be perfect. This battery pack allowed me to not have to carry a spare, not have to recharge midday, it kept me going throughout a full day of use. I love it and I think I can endorse this product. Fuel is a definite must for any Bold user who is in a consistent 3G area!