So I finally went to see â€œThe Hangoverâ€ this week. I had been hearing so much about this comedy movie, and it was gradually racking up the numbers at the box office. At the time of me seeing it, it had already surpassed $152 mil. in ticket sales. The movie is about a guy named Doug (Justin Bartha) and his three best friends, Phil (Bradley Cooper), Stu (Ed Helms), and Alan (Zach Galifianakis) who drive out to Las Vegas to have a bachelor party for Doug who is getting married in two days. All is well till the three friends wake up the next morning and canâ€™t find the groom, or remember anything that happened the night before. To make matters worse thereâ€™s a tiger in the bathroom and a baby in the closet. It must have been some party the night before, but neither of the guys have a clue as to what happened.

Now let me just start off by saying,â€ I am so upset that I didnâ€™t see this movie when it first came outâ€. It came out the same week as â€œThe Taking of Pelham 123â€, and as you may know I went to see that instead, big mistake. This movie is hilarious! Wait let me say that one more time. This movie is freaking hilarious!! From beginning to end this movie will have you rolling out of your seat. The characters were great, the story was actually believable, because guys do really stupid things at bachelor parties, and these guys practically did it all. The great part about it is that you donâ€™t get to actually see theyâ€™re high jinks till the end of the movie which is the capper to the whole mystery. You do get to see the ramifications of their actions and those alone are hysterical. I laughed out loud so many times during this movie, but so did the rest of the audience. 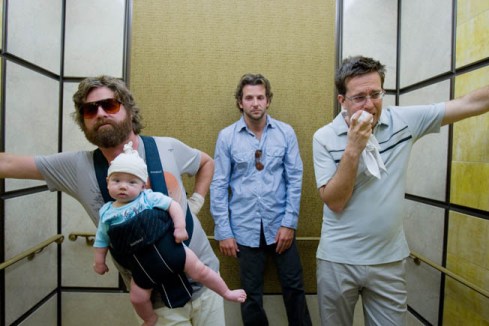 Zach Galifiankas was a definite standout in the group as his character definitely needed to be on some kind of medication. He really did comedic justice with portraying Alan, the soon to be brother in-law. Mike Tyson has a cameo in the movie, and even he got some good laughs. Mike Epps on the other hand, must have just been looking to cameo in anything, because I saw no real purpose in his comedic personality having the small part he has in the movie. Another standout character was â€œMr. Chowâ€ (Ken Jeong). From the time he literally jumps into the movie, he had me on the floor with laughter. This movie is a must see for comedy fans. I give it 3 guys out of 4. Iâ€™m sure if I retrace my steps I can find that last guy. LOL The movie is rated R for pervasive language, sexual content including nudity, and some drug material. It runs 1hr and 39mins. It was written by Jon Lucas and Scott Moore (III). It was directed by Todd Phillips. It was produced by Green Hat Films. It was distributed by Warner Bros. Pictures Distribution.

Reviewed by Eric Williams
When having a bachelor party, make sure you keep track of the grooms whereabouts.