So this past weekend, the highly anticipated remake of â€œThe Taking of Pelham 123â€ came out. The original came out in 1974 and starred Walter Matthau & Robert Shaw. The movie is about four guys who take over a subway train in New York and hold the passengers hostage in an attempt to extort the city for a ransom. John Travolta plays â€œRyderâ€ the leader of the band of thugs, and Denzel Washington plays â€œGarberâ€ a subway train dispatcher who gets caught up in the scheme when they happen to pick his train line to hold captive.

So thatâ€™s the basis of the story in this version. In the original, â€œGerberâ€ played by Walter Matthau was a Lieutenant on the police force, and headed up the operations to catch these criminals. Also in the original the thugs went by code names, such as Mr. Blue, Mr. Green, and so forth. In this version the group robbing the train had an alternate reason for doing so, unlike in the original where it was all about the money. Also Gerber in this version was on the verge of losing his position, where as in the first one he was about to retire. Now the reason Iâ€™m explaining so much about the differences in the two movies is because I fill the original was much better than this remake. The original offered a lot of cat and mouse play between the two main characters. Garber didnâ€™t know the true identities of the robbers till the very end. Plus with less technology available to transit at the time, it was more believable and trilling. Now sure this one offered two of Hollywoodâ€™s top male actors in their first motion picture together, but thatâ€™s about the best thing it had going for it. Travolta played a great ruthless criminal as he has done in past films. Washingtonâ€™s character was kind of boring to me and could have been played by a lesser actor. Also in the movie were some other good actors such as John Turturro as agent Camonetti, but he also didnâ€™t add much to the film. Then there was James Gandolfini who plays the mayor of New York City in a role based on the cityâ€™s real mayor, Mayor Bloomberg. There wasnâ€™t a lot of action in this movie either. Sure a couple of passengers get shot during the whole time frame of the high jacking, but the only action was when the police were tearing through the streets to deliver the ransom money. 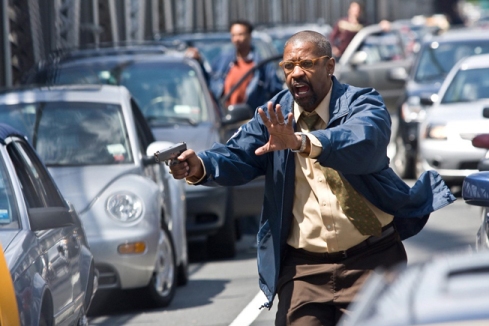 As much as excitement as I had to see this movie, I walked out of the theater very disappointed. I give this movie 2 train cars out of 4. If you want to see a better version of this story, rent the original. Iâ€™m going to rent it myself, this version made me miss the first. The movie ran 1 hour and 35mins. It was rated R for violence and pervasive language which basically came from Travoltaâ€™s mouth. The movie was written by Brian Helgeland. It was directed by Tony Scott. It was produced by Escape Artists, Scott Free Productions. It was distributed by Sony Pictures Releasing.

Reviewed By Eric Williams
If your every contemplating holding a train hostage, make sure you have a MetroCard. Ezo
Next weekâ€™s review: TBD