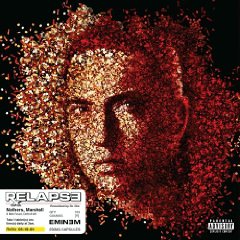 I don’t know where to begin with this album. I had to listen to this album three times to be able to stomach it. I wasn’t prepared for what I was hearing. I am used to the ex wife references, the mom references, but this go round he threw in his step dad. After I got over my personal feelings about what he was saying and listened to the music I was actually impressed.

We obviously know Marshall Mathers the man has issues and Eminem has demons. I can’t fault another mans truth or views on what’s creative but this album is the epitome of love it or hate it. Some people will consider this the most dark and grotesque album they ever heard and some others like myself will say Em DID IT AGAIN !!! I find it hard to give a play by play on most songs because of the topics he touches but Hello and current single 3 am have been the songs I find myself playing the most this.

If you’re a true hip hop fan that is about lyrical content, imagery and tight production with a strong stomach I say get the album. But, if you’re looking for something to dance to, smile and crack jokes to this ain’t. May I suggest instead that you DL a few songs such as Bagpipes from Baghdad, Deja Vu,Crack a Bottle,Beautiful, We Made You and Old Times Sake. I do like the fact that Dr Dre is ever present on the album and did most of the production.