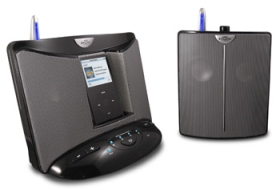 So we have had the EOS Wireless Multi-Room Audio System for some 2 weeks now and we think it is time to give it a full review. We must say at the onset that this system is great, it was a pleasure to use. It has some items we noticed that we didn’t like, but can’t really fault the product for those and we’ll explain in the review.

So let’s first talk about the setup. The setup was very easy, simply plug in and it was ready to go. Now we was sent the complete set up. If you brought the base bundle it would come with the base station and one additional speaker. We have the base station and 4 additional speakers. So we put it all over the house to test it out. We put the base station in the living, then we put speakers in the hallway, bathroom and in the master bedroom. The manual says that it doesn’t work with the iPhone, but we found that it did just fine. We plugged in the iPhone and then turned all the speakers on. This was the end of the setup, it was that easy simply plug it in and turn it on. The base station detected the other speakers and once the link was made, the music stated playing.

Sound quality was very good for this system, the sounds levels were good on each additional speaker with no distortion at any volume. We really like the fact that you can adjust the volume on each speaker without affecting the others. Even if you lower or raise the volume on the base station, this doesn’t affect the other speakers. The base that came from each speakers built in sub-woofer was good enough for what we would expected from the system, it was actually better than we expected. We could let the music play in one room and turn off the other speakers if we wanted, and when we was ready to have a room tune in, all we had to do was turn on the speaker and wait for it to connect which usually only took a second or two. 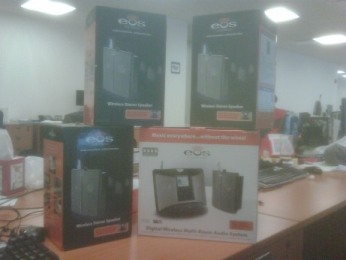 Some of the things we didn’t like included the remote. The remote didn’t seem to have a good range for it. We could only get a few feet away from it and it seems like it had to be direct line of sign with the base station to be able to control it. This isn’t a problem if you are sitting right next to the station, but if you want to drift from room to room, that is going to be a problem. The only other issue we have is the price. While it is a great system, it is a little on the expensive side. The base station bundle (base station + 1 speaker) will run you $249.99 but if you want to get an additional speaker it will run you $129.95 and if you have a few rooms you want to do, that will quickly get pretty expensive.

Now the system can only support up to 4 speakers, which we do wish it could do more. What if you a 4 room house and want one for the outside too. Well we guess you can’t get everything you want, but maybe a future version will have this. To sum it all up, though this is a expensive, it is a very good one. You can not only use it with an iPod, but using the aux in connection, you can hook it up to a MP3 player or another source. We will talk more about this in a LifeStyle post as we did some extra stuff to make it truly wireless, so look out for that this week as well. The bundle again is $249.99 with the additional speakers costing $129.95 and if you would like more information, you can check out http://www.eoswireless.com/