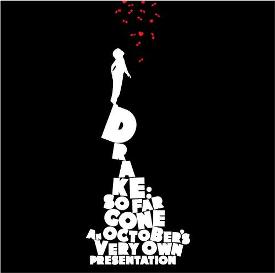 Ok so I admit when I first heard about Drake I was told he was one of the kids from the show Degrassi High and I wasn’t impressed. I was like ok great another child actor trying to fake some talent no thanks. I will be the first to admit boy was I WRONG.

Finally I gave in I needed to find out what this kid was about and I must say I was beyond impressed so my hunt for his mixed tapes began. I decided to listen to the album So Far Gone first and I found it hard to pick a favorite song.

Best I Ever Had has to be the first song that jumps out to me. This song just bangs I can see myself getting it in at the club, running the elliptical to it at the gym or just cruising with the windows open hair blowing in the breeze. It has a nice mellow grove to it and I must say lyrically this kid is a beast. I love how he can use the illest metaphors yet the hook gets straight to the point.

A few other cuts that I was really feeling are Unstoppable feat Santo Gold and Lil Wayne, Uptown feat Bun B and Lil Wayne and Brand New . To be perfectly honest besides The Best I Ever Had it was hard to find a stand out song because this whole album to me is hot. I listened to the entire album from beginning to end without fast forwarding I even ran a few songs back 3 and 4 times.

If I had to compare Drake to anyone I would compare his lyrics to a Young Hov. His flow is at times Lil Wayne’esque but interestingly enough it works and wasn’t annoying. Sometimes so many artists sound like someone else that it all becomes a bit copycat and interchangeable. Usually I could pick out a line and say “yooo that’s crazy” but I found myself lyrically stunned on several occasions. He has the art of storytelling and the makings of being one of the greatest MC ever. I know that’s a big statement but I see it and hear it with every song. He is multi talented he can cary a tune as well. His album is very versatile you hear some rock, a little r & b and of course rap again I say this kid is a beast.

Alot of times you hear a song that is great lyrically but the production suffers or vice versa. He obviously has lyrics for days and simply loves the art and the game has been missing this. For me, Drake is what the games been missing.

Check him out !!! Click the link to download So Far Gone for yourself and tell us what you think about it !!!!