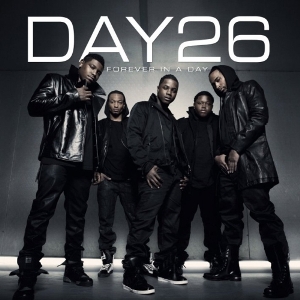 Being the last Band standing, trying to dodge the sophomore album and Making the Band curses are probably adding a lot of undue pressure to Day 26. Despite the odds they are now the premiere group to watch from the Bad Boy camp and really the only relevant male r & b group in the industry today. With that being said letâ€™s hop right into their new album â€œForever in a Dayâ€.

The initial track â€œJust Getting Startedâ€ is a smooth mid tempo track with a nice chill vibe to it. It is a genius starting point and lays a firm foundation for what you expect to be a great album. Then it flows into the current radio banger â€œImma Put It On Herâ€ -I donâ€™t know maybe itâ€™s me but something about the track gives me an empty feeling. I keep waiting for the track to fill out but I will say every time I hear it I canâ€™t help but nod my head and sing along to it.

Then the album flows into a few ballads which up until now I felt was their strong point. Maybe Iâ€™m biased but after I fell so in love with their song â€œCo Starâ€ off their debut album none of the ballads on this album can begin to compare which was a downer for me personally. There are some notable ballads donâ€™t get me wrong, â€œPerfectly Blindâ€ is beautiful but something about the harmonies was throwing me off and I found it a bit distracting. â€œThen Thereâ€™s Youâ€ is beautiful and the harmonies have definitely gotten tighter on this track.

â€œYour Heelsâ€ is definitely one of my favorite songs on the album. This song made me feel sexy. It made me think of strolling down the street in the summertime. Overall, this album is pleasantly reminiscent of 90â€™s R&B, and a very solid album it just wasnâ€™t all it could have been which is a tad disappointing. It has an all star cast of producers and a few guest appearances from JD, T-Pain, Young Joc and Diddy himself. On paper it has all the makings of a classic album; however, they just missed the mark with this one. Itâ€™s not far off but itâ€™s not quite on the level I expected it to be. However, if they step their video game up it will serve as a nice compliment to the album it may take them a level higher. Having said all of that I am pretty confident they will be #1 this week.