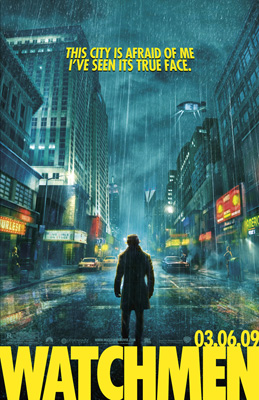 So I know I haven’t had much to review these past weeks, but this past weekend brought me back with a â€œBangâ€. The long anticipated screen adaption to the graphic comic novel â€œWatchmenâ€ finally hit the big screen and boy was the wait worth it. The story revolves around an alternate time frame starting from the 60â€™s and going into the 80â€™s where regular people have become costumed superheroes to help fight crime in the streets and have formed a group called â€œThe Watchmenâ€.

During this time there is a chemical explosion and one scientist actually gets superpowers, and they name him Dr. Manhattan. The movie focuses on 1985 and the U.S. & Soviet Union are both gearing up for a nuclear war and the U.S. has its â€œDooms Dayâ€ clock, which shows the tension between the two countries set at five minutes to midnight. In the midst of all of this, someone has murdered one of the teams founding members. Rorschach, the masked vigilante sets out to find out who has murdered one of his colleagues. With the help of some of his old partners they discover that there is a deep conspiracy linking theyâ€™re past to the present problems of the world which may cause disastrous results in the near future. 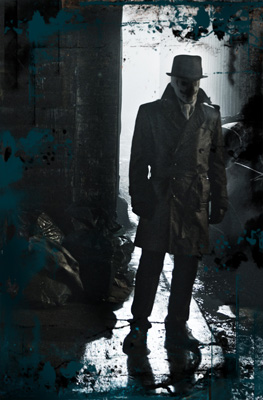 Now let me just say, yes this movie is long. At 2hours and 43mins itâ€™s really long for a superhero movie, but this isnâ€™t your normal superhero movie. This is a look at if theyâ€™re really were normal people dressed like superheroes who protected the world from crime. Aside from the one hero who actual has powers, it showed that these people have problems of their own and are also vulnerable to the same things that regular people go through. I also loved this picture because it kept reminding the viewer that this could have been an actual reality with references of real people and events that were going on in those times in America. I walked out from seeing this movie ready to go back and spend another 3hours in the theater. The action was great, it was gory, and it was an adult superhero movie. Trust me you have never seen superheroes portrayed like this. I give this movie 3 Â½ capes out of 4. It kept me interested in the characters and the lives they led that made them eventually don costumes and fight crime. The movie is rated R for strong graphic violence, sexuality, nudity and language. It runs 2 hours and 43mins. It was directed by Zack Snyder. It was written by Alex Tse and David Hayter from source material from Alan Moore and Dave Gibbons. It was produced by Legendary Pictures, Inc., Lawrence Gordon Productions. It was distributed by Warner Bros. Pictures Distribution.

You donâ€™t have to have superpowers to make a difference in society. Ezo

Next Review: Race to Witch Mountain