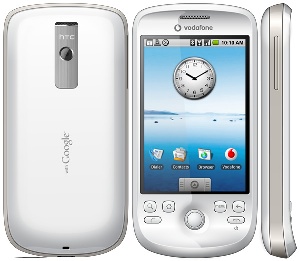 Now this is a phone we mentioned not too long ago going by the name of the G2. It seems it has been officially announced by Vodafone as the HTC Magic. This will be the first Android device without a keyboard. Now you might remember some of our thoughts on this device as we mentioned here. But just like the debut of the G1, we may have a different opinion of it when we see it live. We still think the G1 isn’t any fashion statement, and this may…may hold true for the G2 aka HTC Magic.

At least from pictures, this one is looking better than the G2 and time will tell if it really is a beauty. There hasn’t been any word on when this might make it over here to the US, but initial markets will be the UK, Spain, Germany, France, and Italy. This phone will also have the Android Cupcake firmware right out the gate, though it won’t feature much from the G1 with notable additions being the soft keyboard, a new Google Mail feature to delete or classify mail in bulk and a faster camera with a video option.