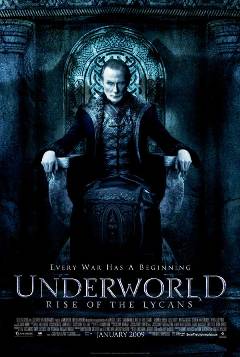 So this past weekend brought us the prequel to â€œUnderworldâ€ adequately titled â€œUnderworld: Rise of the Lycanâ€. Now if any of you are familiar with the Underworld story, itâ€™s about vampires battling werewolves. Well in this one it tells the story of how the Lycan, the werewolves came to release themselves from the chains of the vampires. You see the vampires along with their leader Viktor (Bill Nighy) bread the Lycan to be theyâ€™re guardians against the other werewolves that ran wild in the woods leading up to theyâ€™re castle. This story also follows the romance that developed with Viktorâ€™s daughter Sonja (Rhona Mitra) and the first born Lycan Lucian (Michael Sheen). Lucian was a major character in the first Underworld movie, so the story of how he and Viktor became bitter enemies was addressed, this movie showed what lead up to that battle.

Now I am a big fan of the previous two Underworld movies, so I was very excited to see this prequel telling the story of how this whole feud began. The action moves very fast, just like in the first two movies, so youâ€™re probably wonâ€™t be able to catch it all, but hey that makes buying it when it comes out on DVD all the more fun because your catch scenes you might have missed the first time around. This movie packs a good amount of action to go along with the love story that transpires between Sonja and Lucian. Bill Nighy gives another great performance as the ruthless vampire leader, who only cares about the continued ruling of his empire. Also in the first movie it was said that Viktor loved Selene (Kate Beckinsale), so much because she so resembled his daughter Sonja. Well they definitely found the right actress to take on Sonjaâ€™s role, Rhona Mitra looks like she could be Beckinsaleâ€™s older sister. Also reprising his role in this one is the muscle bound actor Kevin Grevioux as Raze. You will remember him as Lucianâ€™s right hand man/werewolf in the first Underworld movie. Grevioux is also the co-writer of the Underworld series. In this one he tells how his character becomes a werewolf and a close friend to Lucian. I loved this movie and canâ€™t wait to see it again. Itâ€™s a really good prequel to an already great series about vampires fighting werewolves. I give this movie 3 Â½ bites out of 4. Anyone who loved the first two will definitely want to catch this one. The movie ran 1 hr and 32mins. Itâ€™s rated R for bloody violence and some sexuality. It was directed by Patrick Tatopoulos. The screenplay was written by Danny McBride (II), Dirk Blackman, and Howard McCain. It was produced by Lakeshore Entertainment. It was distributed by Screen Gems, Sony Pictures Releasing.

Some times you have to break the chains that bind you, to find your true strengths. Ezo.