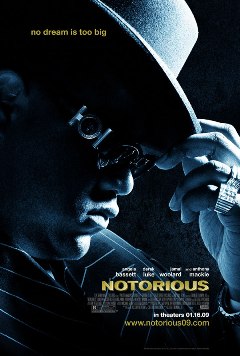 So this past long weekend I went to see â€œNotoriousâ€, the Christopher Wallace aka Biggie Smalls biopic. Now if you were around at the time of Biggieâ€™s life then you already know the history that this movie gets its information from, so I wonâ€™t waste time telling you what the movie is about. I will just get into what I thought of the movie.

Let me say that if you were or are still a Biggie fan as I am, then I am here to assure you that they did justice when doing this movie about Biggie. I know just like a lot of you, that when I heard they were doing a movie about Biggie I thought the worst. I thought it would be low budgeted and just your average hip hop movie. Well let me tell you it isnâ€™t! Although I knew everything that was in the movie surrounding Biggies short lived life, I was still hoping that it wouldnâ€™t end the way it did, but that is how his life ended. I have been a Biggie fan since he first dropped â€œParty and Bullshitâ€ and after seeing this movie I went out and starting playing Biggie in my car. He was a great talent who is surely missed in this age of hip hop, and seeing this movie just brought all of that back to light. The actor Jamal Woolard, who played Biggie, did a great job. The stand outs though were Derek Luke and Naturi Naughton who played Sean â€œPuffyâ€ Combs and Lil Kim. There are scenes in this movie of Derek doing Puffy that will have you falling out of your seat. Angela Bassett playing Biggieâ€™s moms, Voletta Wallace gave a great performance as well.

There was a pleasant surprise in the movie, if you havenâ€™t heard yet. The son of Biggie and Faith Evans, Christopher Jordan Wallace plays Biggie at age 14. Anthony Mackie did an ok performance as Tupac Shakur, but Tupac was an entity all to himself and would have been hard for anyone to emulate. Marc John Jefferies plays Lil Cease, no comment on that one, LOL. I mean who really knew Lil Cease anyway. I think there should have been someone in the movie to portray Jay Z, but I guess they didnâ€™t want to go to far away from the main Bad Boy camp. I walked out of this movie missing Biggie all over again like it was March 10, 1997, the day after Biggie got killed. I give this movie 4 B.I.G. tracks out of 4. The movie ran 2hrs and 3 mins. It was rated R for pervasive language, some strong sexuality including dialogue, nudity, and for drug content. It was directed by George Tillman Jr. It was written by Cheo Hodari Coker, and Reggie Rock Bythewood. It was produced by By Storm Films, State Street Pictures, Bad Boy Worldwide Entertainment, Voletta Wallace Films. It was distributed by Fox Searchlight Pictures.

B.I.G., P-O, P-P-A
No info, for the, DEA
Federal agents mad cause I’m flagrant
Tap my cell, and the phone in the basement. Biggie Smalls
Next weeks movie TBD.