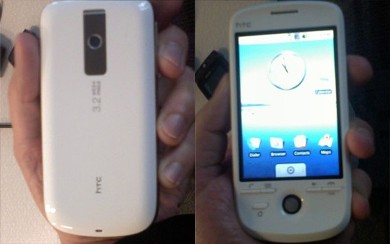 Ok first there was the debut, the premiere, the release of the first Android device the G1. Now while it wasn’t ugly in person (pictures peg it as ugly), it was no where the Bell of the Ball either. Now we have these leaked shots of the G2 and it hasn’t gotten any better. Yes it supposedly thinner and there is no keyboard on this one. But it hasn’t gotten much better in the looks department. Sure the banana hump if gone, and the back does look better, but what’s up with the front of this thing?

The back displays this smooth skipping stone like back, which is glossy and sleek. Then you turn it around to the front and ehhh, what the hell is that! that trackball in the middle looks like it put on a outfit that is way too big for it, it looks like it is being swallowed by the casing. Then the front looks like it is a whole other casing from the back, like someone mismatched it. I mean what is up with the front. And then look at the four buttons on the bottom, are you serious? If you was going to have buttons as crappy as that, then you should of just had no buttons at all! I’m sorry, but after seen the likes of the Touch HD, I’m really not understanding why the G1, and now the G2 is looking the way it does. I mean are Android devices only meant to have average hardware looks to them? Can we expect nothing iPhone-ish/Touch HD-ish/Palm Pre-ish from an Android device?