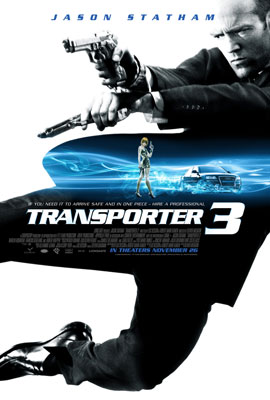 So this past weekend brought us the 3rd installment in the Transporter series. The movie stars Jason Statham as â€œFrank Martinâ€ a package transporter for hire. In this one Frank must takeover an assignment that he had given to another driver, when that driver shows up at his house dying. Frank has since retired from transporting packages, but is convinced to take over the assignment, when he is kidnapped by the people involved with the so called package, and wakes up with a bracelet on his wrist that will explode if he is 75 feet from his car. Also wearing the device is the â€œpackageâ€, a young woman named Valentina (Natalya Rudakova) who is the daughter of the Ukraineâ€™s head of Environmental Protection Agency, Leonid Vasilev (Jeroen Krabbe). Keeping a close eye on Frank is Johnson (Robert Knepper of â€œPrison Breakâ€ on Fox), who is using Valentina as bait to get her father to sign some documents he wants. Valentine at first is not a cooperative passenger, but she soon warms up to Frank on theyâ€™re journey across Marseilles, Stuttgart, Budapest and finally Odessa on the Black Sea.

Now I am a fan of the first two Transporter movies, and this one was about the same as the last. You see in all three movies Frank has ended up carrying â€œhuman packagesâ€ on these missions, so that was the same. The fight scenes were really good, and of course there were a lot of car chase scenes as well. All in all the action kept the movie going, although it did drag during the middle with the whole building of Frank and Valentinaâ€™s relationship. There were two kind of unbelievable car stunts done involving a railroad train, but other than that the movie was good. Itâ€™s not a complicated plot, which none of the 3 movies have been, so itâ€™s basically for anyone who wants to see some good action involving fighting and driving. I give the movie 2 Â½ cars out of 4. It does kind of seem done already, in the last movie just with a different motive for the villain. The movie ran 1 hr and 43 mins. Which went along at a pretty good pace? It was rated PG-13 for sequences of intense action and violence, some sexual content and drug material. It was written by Luc Besson and Robert Kamen. It was directed by Olivier Megaton. It was produced by EuropaCorp, TF1 Films Productions, Grive Productions, Apipoulai Prod, Current Entertainment, Canal Plus. It was distributed by Lionsgate.