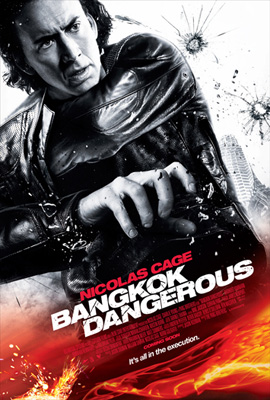 This past weekend brought us Bangkok Dangerous, starring Nicolas Cage as a hitman who is a loner and has set a list of rules that he uses to finish his assignments without getting caught or being known to the rest of the world. His name is simply Joe, and he is given an assignment in Bangkok to kill four contracts by a crime boss named Surat. Once he gets there he enlists the help of a street pick pocket named Kong (Shakrit Yamnarm). In his line of work he often does this, and then kills his assistant at the end of the mission so that there is no one left that knows him.

In Bangkok Joe starts to feel the loneliness of his work, and he starts to go against his own rules. He starts to teach Kong the ways of being a hitman, and he starts to have feelings for a young woman who works at a drug store. These actions couldnâ€™t have come at a more wrong time, because Surat gets edgy and decides itâ€™s time to clean house, so that none of the people killed by Joe are traced back to him. 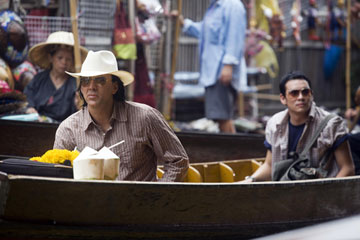 Thatâ€™s it, thatâ€™s the plain simple story to a plain simple hitman movie formula. This formula is always used to show how being a killer for hire can become a very lonesome existence. Itâ€™s been done in so many movies before this one that you know there are only two ways this will end up. Either the hitman will kill his boss or be killed trying to save the people he has now started to care for. Ok so in this one we see a little bit of Bangkok scenery and Nicolas Cage is the only American in the movie. That doesnâ€™t change the formula, it just shows that heâ€™s lonely in a foreign town. This movie wasnâ€™t any better then any other hitman for hire movies. In fact the action was kinda slow and boring. I really canâ€™t say much more than that. Oh Nicolas narrates the movie in first person in the beginning, but doesnâ€™t he do that in a lot of his movies? This movie could have gone straight to DVD. There was nothing in it that was fresh and frankly it lacked any real good action. I give this movie 1 bullet out of 4. The movie is 1hour and 40mins. It was rated R for violence, language and some sexuality. It was written by Jason Richman from source material from Danny & Oxide Pang. It was directed by Danny & Oxide Pang. It was distributed by Lionsgate, and it was produced by Initial Entertainment Group, Saturn Films, Blue Star Entertainment, International Production Company

Life can be a very lonely existence, especially if you put your self in that situation. Ezo
Next weeks movie:Burn After Reading