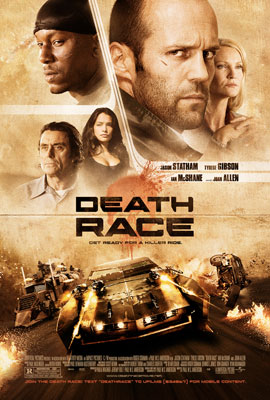 This past weekend action star Jason Statham starred in Death Race. In this movie he plays Jensen Ames, a 5 time NASCAR Champion who is framed for the murder of his wife and sent to a maximum security prison where deadly car races are the prisonâ€™s way of entertaining the vast masses of internet subscribers. The year is 2020 and after the economic crash of 2012, the jails are overcrowded. This leads to the building of Terminal Island, an inescapable prison that sits a mile off the coast land in the middle of the ocean. Itâ€™s run by Warden C. Hennessey (Joan Allen) who has come up with a money making machine called â€œDeath Raceâ€. For the price of subscription, internet viewers can watch car races where the drivers are racing for their release from the prison. 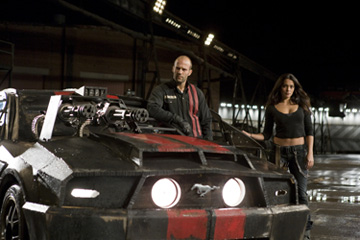 Does this story sound familiar yet? It should because it was the basic concept behind â€œRunning Manâ€ that starred Arnold Schwarzenegger many years ago. The only difference is that in this story the prisoners are driving supped up muscle cars with armor plating, and machine gun turrets. After Warden Hennesseyâ€™s star driver is killed she recruits Jensen to take over his persona as â€œFrankensteinâ€, of course she leaves him no choice in the matter. Also in the movie is Tyrese Gibson who plays â€œMachine Gun Joeâ€, who is Frankensteinâ€™s arch enemy and the only inmate who is also close to winning his freedom. Ian McShane plays â€œCoachâ€, the head of the pit crew for Jensenâ€™s car. Then there is the lovely Natalie Martinez who plays â€œCaseâ€, a prisoner from a womenâ€™s facility that gets the opportunity to serve as navigators for the drivers, and also vying for their freedom. 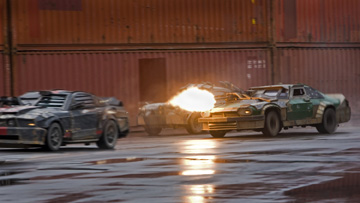 From the time I saw the trailer for this movie I could see the similarity it had with other movies where prisoners are promised their freedom in return for entertaining the outside world. There isnâ€™t much more to the story that you havenâ€™t probably already seen in movies of this kind. In these movies, the warden never wants to release their star ratings getter, so the star always has to find a way to escape on their own while still planning on the revenge they will have on the warden. Itâ€™s been done many times before, and this one brought nothing new to the script. As a matter of fact, they didnâ€™t even waste a lot of paper on dialogue for this one. From the start of the movie, it isnâ€™t long before Jason Statham is in the races and that takes up the completion of the movie. I thought the action wasnâ€™t really all that fresh, and the car scenes were predictable. You know from the beginning that all of the other racers are there just for carnage value. Now donâ€™t get me wrong I like Jason Statman as an action movie actor, but sometimes he should leave a movie like this to an unknown actor to portray, but then I guess it wouldnâ€™t get an audience. Tyrese Gibson seems to just take whatever role is offered to him. I know he canâ€™t wait for Transformers 2 to come out, so he can shine in the blockbuster numbers that movie will make. Ian McShane, I feel is also a star who should have passed this movie up, it could have been played by a lesser actor than him.

In all I give this movie 1 Â½ cars. It wasnâ€™t a new concept by any means, and frankly itâ€™s a tired one at that. The movie ran 1 hour and 29 minutes, which tells you a lot about how much thought they put into a story line, when the car racing takes up the majority of that time. Itâ€™s rated R for strong violence and language. It was rewritten several times, and the final blame falls on Paul W. S. Anderson, who also directed it. It was produced by Cruise/Wagner Productions (C/W Productions), which I believe is the company co-owned by Tom Cruise and is a good sign as to why that company is about to fold. This was also produced by Impact Pictures and Relativity Media. It was distributed by Universal Pictures.

Life can be economically challenging, donâ€™t let it lead you to a life of crime. Ezo
Next weeks movie: Babylon A.D.