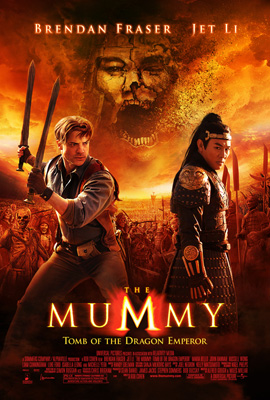 First of all, let me be the first to say â€œIâ€™m sorryâ€. Iâ€™m saying this to the people behind the mega hit movie â€œDark Knightâ€. Iâ€™m sure weâ€™ve all been watching as it climbs further and further to be the #1 grossing film of all time. This weekend brought â€œThe Mummy: The Curse of the Dragon Emperorâ€ a third installment to the franchise. Now from the trailer I thought, â€Okay, This looks action packed and with Jet Li starring as the Mummy, itâ€™s got to be goodâ€. I even went as far as to think it may knock the Batman movie out of its first place position, and for this thought I am sorry. The Dark Knight has nothing to worry about. In this third mummy movie, Rick Oâ€™Connell (Brendan Fraser), who fought the same mummy in the two previous adventures, isnâ€™t the one to find this new mummy. Itâ€™s his son Alex Oâ€™Connell (Luke Ford) who comes to find the tomb of â€œThe Dragon Emperor Hanâ€ (Jet Li) and his 10,000 solders, which along with him have all been frozen in stone for 2,000 years by a curse from a sorceress. Rick and his wife Evelyn Carnahan O’Connell (Maria Bello) who have no idea that their son is continuing in his dadâ€™s footsteps run into him when they are sent on another adventure that takes them to China. 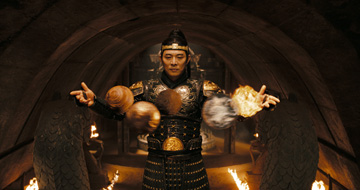 Once reunited they end up resurrecting the emperor, who is intent on finishing his reign of world domination. The difference between him and the previous mummy is that he also has the gift of sorcery at his disposal. Along for the ride is Evelynâ€™s brother Jonathan Carnahan (John Hannah) who is still always looking for a way to make a buck. With the help of the Sorceress Zijuan (Michelle Yeoh) and her daughter Lin (Isabella Leong), the Oâ€™Connellâ€™s face their greatest undead foe so far. 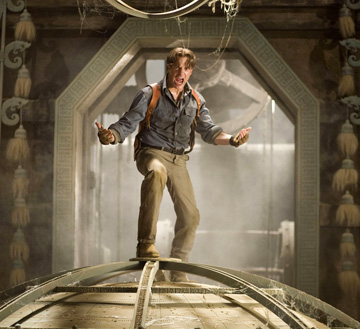 This movie was so badly written, I kept thinking maybe the writers made it extra cheesy to bring back the feel of the B movies of the 40â€™s & 50â€™s. Now I donâ€™t remember the first two mummy movies being this over the top. They had good stories, and the adventures were somewhat believable. Not this time around. The banter between Rick and his son was so unbearable, if the movie would have went any longer I might have fallen asleep. I just kept waiting for the action to continue. The best action scenes though were the ones seen in the commercials. There wasnâ€™t much more than what you saw in those ads. Even with Jet Li in the movie, he didnâ€™t add much to the action scenes and after his opening scenes he wasnâ€™t really physically in the rest of the movie till the end. I walked out of the theater greatly disappointed. Now there was one good scene that involved the Yetis in the snow capped mountains of the Himalayas. Plus the other mythical creature effects were also good. Letâ€™s just hope that there arenâ€™t any more mummies to dig up for this franchise, it seems to have lost its life and should stay buried in a tomb somewhere. I give this movie 1 Â½ tombs. It just didnâ€™t deliver the same feel as the first two previous movies. The movie ran 1hr and 54mins. It was rated PG-13 for adventure action and violence. It came from the production company of The Sean Daniel Company, Sommers Company. It was distributed by Universal Pictures Distribution. It was directed by Rob Cohen. It was written by Alfred Gough and Miles Miller.

Donâ€™t get wrapped up in life to the point of digging your own tomb. Ezo
Next weeks movie: Pineapple Express