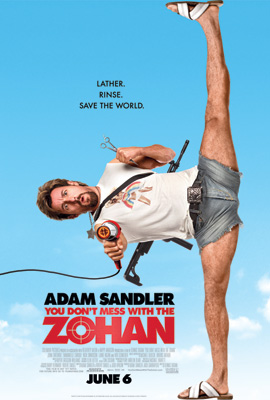 This weekend â€œMan Childâ€ comedian Adam Sandler brought â€œYou Donâ€™t Mess with the Zohanâ€ to theaters. This is the story of an Israeli commando who has grown tired of all the fighting he does, and thereby fakes his own death to pursue his true dream of hair styling. After successfully succeeding in his plan, Zohan (Adam Sandler) goes to New York in an attempt to become Paul Mitchellâ€™s new great hair designer.

Things donâ€™t go as planned and instead he ends up getting a job at a Palestinian owned beauty shop. He starts to impress the owner Dalia (Emmanuelle Chriqui), when his clientÃ¨le grows as word gets out that he doesnâ€™t just cut the womanâ€™s hair, but will also send you home with your legs wobbly after an added quickie of sex. Things are looking good for Zohan until a Palestinian cab driver named Salim ( Rob Schneider), sees him and confirms that Zohan is very much alive. He calls up Zohanâ€™s arch enemy â€œThe Phantomâ€ (John Turturro), who is believed to have killed the mighty Zohan. 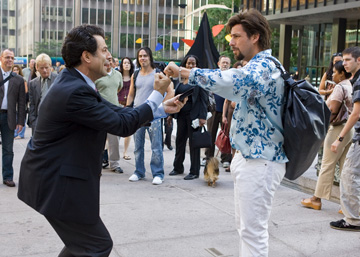 Now I have been a huge Adam Sandler fan ever since I first saw Billy Madison. I thought he was the ultimate symbol for guys who didnâ€™t want to grow up and except being an adult. His movies have always been very childish and raunchy humor, which most guys would find funny. We would laugh at the shear idiotic things he would do in his movies. From having a fight with Barv Barker in â€œHappy Gilmoreâ€to being a mentally challenged water boy who has a mean football tackle in â€œThe Waterboyâ€ to being the guy who got to smack David Hasselhoff around in â€œClickâ€. Now maybe Iâ€™ve grown up or maybe he has, but whatever happened, this movie is not youâ€™re usual laugh out load, spit out your soda, choke on your popcorn type of humorous movie weâ€™ve grown to love from Sandler. The movie uses certain jokes a bit too much through the course of the film, especially the running joke about Zohanâ€™s genitals. It got tired early on in the first 30 minutes of the film. Then thereâ€™s the accent that Adam uses in the movie, you really get tired of hearing it in the first ten minutes of the movie. Sandler tried to bring out all his big name celebrity comedic friends in cameos that didnâ€™t serve a purpose when it came to adding more “funny” to this movie. Thereâ€™s even a cameo by the actress who played â€œMrs. Garrettâ€ from â€œFacts of Lifeâ€. Yeah, I thought she had died too. Anyway, the movie had occasional funny parts, but nothing up to the standard weâ€™ve grown to love from Sandler. Some of the jokes made at the expense of Palestinians, and Israeli people are funny, and John Turtorro gives a good effort at being as funny as he was in â€œMr. Deedsâ€, another Sandler movie he was in. As far as Rob Schneider, dude just say â€œYou can do itâ€, and weâ€™ll laugh. He doesnâ€™t do well with playing whole characters in Sandlerâ€™s movies. I have to sadly give this movie just 1 commando out of 4. I wanted so much for this movie to be another hit for Sandler, but unfortunately he seems to be losing his formula to just be stupid and it be funny. Heâ€™s being stupid and at times itâ€™s rather sad. The movie is PG-13 for crude and sexual content throughout, language and nudity. It runs 1hr and 53mins. Itâ€™s a Happy Madison production, and was distributed by Sony pictures. It was written by Adam Sandler, Judd Apatow, and Robert Smigel. It was directed by Dennis Dugan.

Life is a movie be a Star, Ezo

Next weekendâ€™s movie in Review: The Incredible Hulk