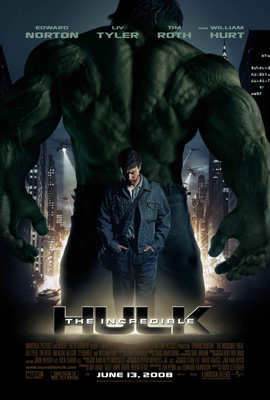 This weekend, Marvel put out another superhero movie. Right on the tail of “Iron Man”, “The Incredible Hulk” is sure to continue their success with this summer’s blockbuster movies. In this second take on the strongest hero in Marvels catalog, Bruce Banner (Ed Norton) is desperate to find a cure for the monster that comes out of him anytime he gets enraged.

The movies opening credits, brings you up to date with what Bruce has gone through up to this point. Once the movie starts, we find that Bruce is in hiding in Brazil, and is working with a Dr. Blue who is trying to help him with his gamma problem via IM. It’s not long before Bruce’s arch enemy General Ross (William Hurt) finds out Bruce’s location and comes with an army to capture him. They chase him through the streets of Brazil, till he gets cornered, which is not a good thing if you’re the pursuer. You see, this will only make Bruce angry, and we all know what happens then. The Hulk comes out, and escapes his adversaries. This doesn’t hold well with the General. He incorporates the help of Emil Blonsky (Tim Roth) who is a hired solder of fortune. 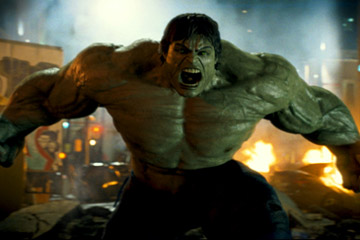 In the meantime, Bruce gets back in touch with his true love Betty Ross ( Liv Tyler), who happens to be the general’s daughter, but she hasn’t talked to her father since Bruce’s accident. With her help they locate Dr. Blue aka Dr. Samuel Sterns (Tim Blake Nelson), who has been hard at work trying to perfect a cure for Bruce. On the other side, General Ross injects Blonsky with a super soldier serum to help him better match up with the Hulk’s power. This doesn’t work, but soon Blonsky meets up with Dr. Samuels and gets another injection, this time of Bruce’s blood. This turns him into the Hulk’s powerful enemy, Abomination. The two clash in a ferocious battle towards the end of the movie, and what a fight it is.

This version of the Hulk is so much better than the first version, which was directed by Ang Lee. The Hulk is still done with CGI effects, but this time around it was done so much better, and he doesn’t get bigger the angrier he gets. That was a major problem the fans had with the first movie. The Hulk has always been a monster that gets stronger the madder he gets, and in this version, they used that fact to the fullest. Ed Norton as The Hulk was an ok choice. I believe he was much more convincing than Eric Bana was in the first. Liv Tyler was kind of dry as Betty Ross, but she did a good job in the role. William Hurt played the part of General Ross, as a”get the Hulk at any means necessary” bad guy. Tim Roth was very good in his role as a soldier who would give his soul to possess the power that the Hulk wielded.

There were a lot of winks at past Hulk takes. Like having the theme song from the Hulk television show thrown in the movie, and having a cameo from the man who played the Hulk on television, Lou Ferrigno who also does the voice of the Hulk in this movie. Of course Stan Lee made his cameo in the movie, like he does in all the Marvel superhero movies. I really enjoyed this take on the Hulk, and felt it gave the fans exactly what they wanted, a true to the story rendition of the worlds strongest superhero. It has enough action for any Hulk fan, and they show the love the Hulk/Bruce Banner has for Betty Ross. The last thing I can say about this movie, “Hulk Smash” this time around. I have to give this movie 3 out of 4 smashes, just on the basis of the turn around they did from that horrible first rendition they put out. The movie ran 1hr and 54mins, but it went very fast.

It’s rated PG-13 for sequences of intense action violence, some frightening sci-fi images and brief suggestive content. It was directed by Louis Leterrier. It was written by Zak Penn with the help of Stan Lee, and Jack Kirby. It was distributed by Universal Pictures.
Life can be hard, control your temper. Ezo

Next weeks review: “Get Smart”