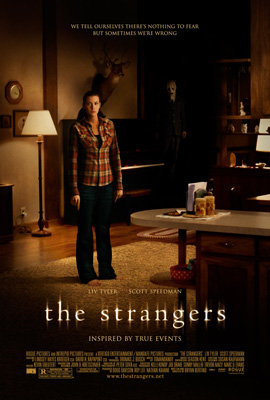 This weekend brought out one of the most anticipated movies of the summer with â€œSex and the Cityâ€. Since I had never viewed the one time HBO hit show, I felt I didnâ€™t have a relationship with the characters to bother to go and see it. Iâ€™m sure it will gross over 1 hundred million, as flocks of women across the country went in groups to see it. I instead went to see â€œThe Strangersâ€. In this based on true events movie, Liv Tyler and Scott Speedman, play Kristen McKay and James Hoyt.

They are a couple who are returning from a friends wedding, and James had made plans for a romantic evening at his parentâ€™s summer home. Things are not good from the start as Jamesâ€™ plan is spoiled by Kristen not wanting theyâ€™re relationship to take that final step. Once they reach the house, the tension between the two is quite unbearable for James, and he decides that they will go their separate ways in the morning. Then thereâ€™s a knock at the door, and a strange woman ask for a person who doesnâ€™t live there. James not thinking anything of it decides to go to the town grocery store to pick up some things, and leaves Kristen by herself. While he is gone, thereâ€™s another knock at the door, and once again itâ€™s the strange woman. Kristen once again sends her off, but decides to call James to see how far he is from the house because now she is getting scared. As she waits, she discovers that the strange woman is not alone. There is also another woman with her, and a man, and they are all now wearing mask over theyâ€™re faces. When James returns, he soon discovers along with Kristen that this group of three are out to harm them in some way. They try to stand ground in the house, but it is too late as the three masked psychos have already gained entrance into the house. 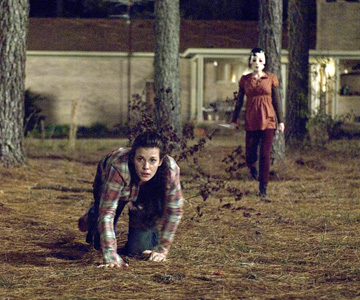 This movie is said to be based on true events, so I guess the story is what it is. Most of the suspenseful moments were shown in the trailer of the movie, so itâ€™s really not much more scares in the movie. Yes when you see the three in their mask, it does give you frightening thoughts, as if this happened to you, and what would you do? But other than that, itâ€™s not really scary, and you kind of know what the end result is going to be. They basically give that away in the beginning of the movie. Liv Tyler and Scott Speedman play your typical scared victims, who make a lot of bad choices in trying to get away from the predators. At the end of the movie it makes you think twice about buying that house in the middle of nowhere. But hey isnâ€™t that always the first mistake in these movies. I was not frightened at all by this movie, just amazed at how people react to strangers who come knocking at the middle of the night, when you know thereâ€™s not another house for miles. I have to give this movie 1 secluded home out of 4. The movie ran 1 hour and 47 minutes. It was rated R for violence/terror and language. It was written & directed by Bryan Bertino. It was produced by Mad Hatter Films, Mandate Pictures, and Vertigo Entertainment. It was distributed by Universal Pictures Distribution.
Life can be scary as it is, watch out for strangers wearing mask. Ezo