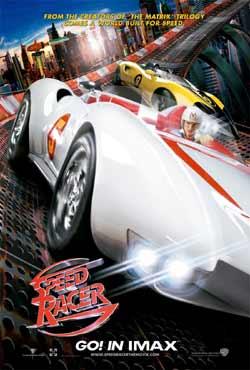 This weekendâ€™s movie review is â€œSpeed Racerâ€. This movie is derived from the cult classic cartoon by the same name. Speed Racer was a hit cartoon in the 60â€™s, and just like every other old show or cartoon it has been turned into an updated movie. The movie stars Emile Hirsh as Speed Racer, a boy who eats, drinks, and sleeps car racing. His Brother was a racer, and he is determined to follow in his footsteps. The movie tells the story of how Speed Racer comes to be the hottest star on the track.

The movie starts off showing us just how fascinated young Speed is with racing as he sits in class, and is oblivious to anything going on. All young Speed can think of is car racing, which isnâ€™t so good for his grades. His brother Rex Racer is one of the best racers at the time, and Speed idolizes him. The movie shoots years ahead and we see an older Speed, who is now racing himself. He is in the very race where his brother had earlier set the world record for the fastest finish time. Speed wins the race, and is offered a position on Royalton Industries roster. He turns them down, which doesnâ€™t hold well with the companyâ€™s owner Mr. Royalton (Roger Allam). He threatens Speed and promises him that he will never win another race without his backing, and his familyâ€™s business will go under. Undeterred Speed still races and soon finds out that Mr. Royalton is in fact controlling the races outcomes. After Speed loses the race, it finishes his chances of qualifying for the big race, â€œThe Grand Prixâ€. Speed finds out from another racer named Racer X (Matthew Fox), that there is still a chance for him to qualify, and also help fight against the corruption that has been going on in the sport. The only thing is this race is not a normal race, but a grueling cross-country race, that has already taken the life of Speedâ€™s brother Rex. Without his parents permission he enters the race, and joins forces with Racer X and another driver who is also out to stop Mr. Royalton. With the help of his girlfriend Trixie ( Christina Ricci), he and his new partners go head to head with Royaltonâ€™s team of drivers in a no rules, gadget filled battle that goes on through several continents in this deadly race. After the race Speed qualifies for the final big race of the racing circuit, â€œThe Grand Prixâ€. Mr. Royalton does everything in his power to stop Speed from finishing this race, let alone winning it. 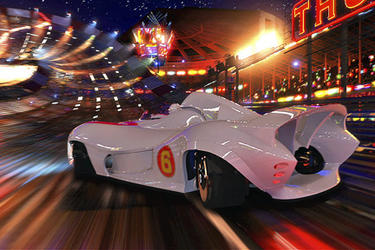 This movie is visually stunning in all its lights and flash. The script is really not why you would come to see this movie. Itâ€™s definitely geared towards a young audience with a bunch of scenes that have Speedâ€™s little brother Spritle (Paulie Litt) and his chimpanzee pet wrecking havoc throughout the movie, with theyâ€™re cute and funny escapades. John Goodman and Susan Sarandon play Speedâ€™s parents, and give excellent campy performances. Like I mentioned before your not here to see great acting. What you will come out of this movie with is some of the best visually stunning car race scenes youâ€™re ever seen. The Wachowski Brothers who made the very successful â€œMatrixâ€ series direct this movie, and they call the car scenes â€œCar Fuâ€, which is a very good description of what your see in this movie. I was a big fan of Speed Racer growing up, and I remember that even the cartoon had some unbelievable racing scenes so I wasnâ€™t surprised by the live actions scenes. I give this movie a 1&1/2 checkered flags out of 4. The movie is a bit long with a running time of 2hrs, and 15mins, but it kind of went fast because it keeps you focused with the race scenes. The movie is rated PG for sequences of action, some violence and language. It was distributed by Warner Brotherâ€™s production.

Life can be a race, have the fastest car. Ezo