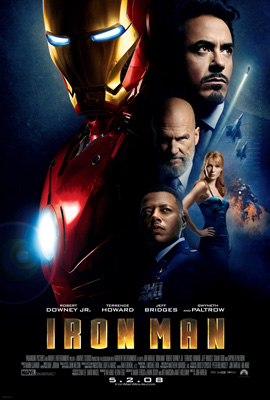 This weekend sparked the start of the “Summer Super Hero Movie”, with the release of Iron Man. This is another superhero taken from the vast “Marvel Comics” collection of heroes. In this one billionaire weapons designer, Tony Starks (Robert Downey Jr.) is captured in Afghanistan by a group of terrorist, while on a tour to promote his newest missile. The terrorist happen to be big fans of Mr. Stark’s weapons of mass destruction. They try to force him to make them his newest style missile which can cause miles of devastation with its detonation. While captured, he plans an escape by making an armored suit to wear to fight off his captives. He has success with the suit, and when he gets back to the States he starts development on version #2 of his new flying armored suit. He calls a press conference and reveals that he will no longer make weapons for war. This doesn’t hold well with his partner, Obadiah Stane (Jeff Bridges). With the help of his very advanced lab, he makes a second suit which is far superior to its first prototype. After he goes on a revenge mission to seek and destroy the leader of the terrorist who held him, the military become aware of a new weapon that has somehow did the job they couldn’t do. Even after Tony thinks that he has destroyed all of the terrorist’s weapons he finds out that they are somehow still getting shipments of his weapons. With the help of his assistant Virginia “Pepper” Potts (Gwyneth Paltrow), he discovers that his partner is only out for himself, and wants to continue selling weapons at any cost. Also helping Stark is his long time friend, James “Rhodey” Rhodes (Terrence Howard), who has a high rank in the Air Force, and keeps them from going after Starks whenever he’s flying around in his new suit. Things get ugly, and Starks finds himself going head to head with a revamped version of his first suit. 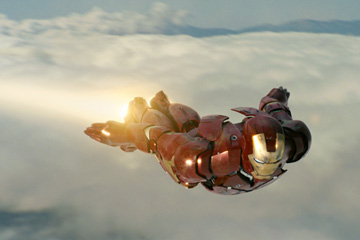 Let me just say that this is one of the best comic book hero written stories since “Spider-Man”. Downey is very convincing as the booze-drinking, womanizing Tony Starks. If he stays with this franchise he’s sure to become once again a powerhouse in Hollywood, like he was years ago. At first mention I was a little scared at how he would perform as Tony Starks, with the disaster of “The Hulk” being played by Eric Bana. The new Hulk movie looks much better with Ed Norton, playing a more Bruce Banner looking actor. Anyway back to “Iron Man”, this movie has a good amount of action that comes after the writers develop their character’s story lines. All the actors involved played their roles very convincingly, and I hope they come back for the second installment. Yes you heard it! The studios know that they have a winner in this franchise, and we’re not ashamed to say that there will most likely be a follow-up to this blockbuster movie. Just look at the success of the “Spider-Man” series, and you realize that comic book hero movies will continue to be put out at a rapid pace. I give this movie 3 plasma blasts out of 4. The story is intelligent, the action is breathtaking, and Downey gives one of his best performances in years. Even Jeff Bridges character doesn’t go over the top with his evil intentions. He’s even sporting a bald head in this movie. The movie runs 2 hrs & 6mins. It’s rated PG-13 for some intense sequences of sci-fi action and violence, and brief suggestive content. It was directed by Jon Favreau, who also manages to put himself in a small part as driver/bodyguard. It was distributed by Paramount Pictures under a Marvel Studios production. Oh and of course our friendly neighborhood comic fan hero Stan Lee makes a cameo.

Remember anyone can be a superhero, as long as you have values in life. Ezo