Will Ferrell stars as Jackie Moon, the owner, coach and player of an ABA 70’s basketball team in this week’s review of Semi -Pro. In the movie Jackie Moon is the owner of the team the Flint Michigan Tropics, which he started with the success he made, when he had the country’s #1 song “Love Me Sexy”. His team has the worst record in the ABA, but with the upcoming merger of the ABA into the NBA, Jackie sees a bright future for his team. Jackie soon finds out that his team will not be included in the four team only merger. He convinces the Commissioner (David Koechner, Ferrell movie regular) to give his team a chance if they can win games, make it to 4th place, and bring fans to their arena. He acquires the help of ex Boston Celtic champion Monix (Woody Harrelson) to help take his team to the NBA. The movie also stars Andre “Andre 3000” Benjamin as Clarence the only real good player on the Tropics. He’s a great player, but doesn’t involve his teammates when he gets his hands on the ball, which he finds out when he challenges Monix’s actual contribution to Boston’s winning of a championship. 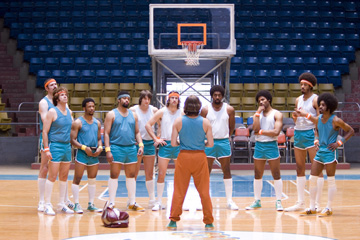 This movie is typical Will Ferrell humor, although not as funny as some of his previous movies. There were alot of really funny scenes, but at times I felt bored. His movies usually keep me hysterically laughing throughout, but this one just got me by. There is a side story with Woody’s character trying to win back his one true love (Maura Tierney) that kept me laughing. Will threw in his usual crazy humor, like having a wrestling match between him and a bear to help promote attendance at his arena. But even those gags seemed slow and done before. Now I’m not saying that Will Ferrell still isn’t one of the funniest comedians in movies, it’s just that maybe he should step away from the sports movies for a little while. By the way a little tid bit of info. 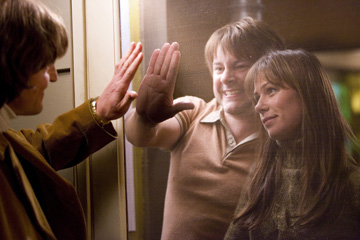 This is Will Ferrell’s 3rd sports movie, and also’s Woody Harrelson’s 3rd sports movie. So now they are tied with Wesley Snipes for three a piece, two of which Woody & Wesley starred in together (Wildcats, White Men Can’t Jump). I give you a moment to think of Wesley’s other sports movie. Will also brings in the help of his ex Saturday Night Live alumni Tim Meadows to add some jokes to the mix. The two game announcers (Andrew Daly, Will Arnett) have some of the funnier scenes in the movie. There’s also a funny play that the team adds to it’s offense towards the end of the movie, that will give you a chuckle. The movie did make me laugh at times, but overall seemed to drag, so I’m gonna have to give it 1 1/2 basketballs out of 4. I really wanted to give it 2, but this really wasn’t as funny as Mr. Ferrell’s previous movies by far. The movie was directed by Kent Alterman, written by Scot Armstrong. It was distributed by New Line Cinemas. It’s 1 hour & 30mins, and is rated R for language and some sexual content.