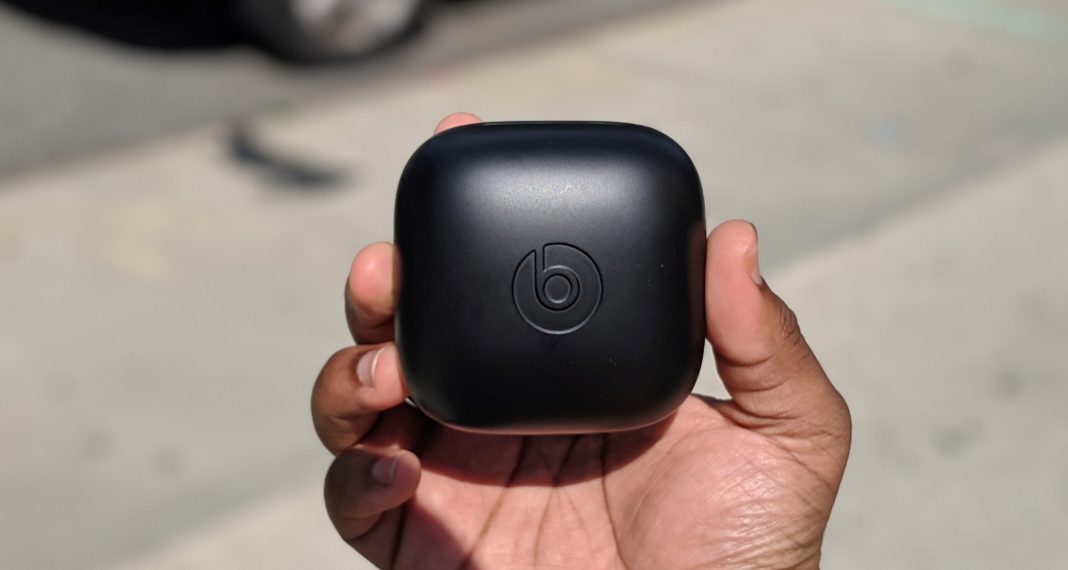 We are heading into the fall season but one product that seems to have stood out for the summer is the PowerBeats Pro by Beats. This would be their first entry into the true wireless earbuds arena which has gathered some strong competition as of late.  It’s been awhile dealing with a new product from Beats since their BeatsX around the neck headphones I personally wasn’t impressed with. Having dealt with a magnitude of TW earbuds this year the PowerBeats Pro may stand out in a class by themselves for better or worst.

Unboxing the PowerBeats Pro first thing you will notice is its enormous clamshell style charging carry case. It’s one of the thickest biggest truly wireless cases I have come across. It’s not pants pocket friendly so often times you want to throw it in your bag or jacket pocket if possible. The case itself has a smooth matte black finish and features a lightning cable port on the back and a “blink and you will miss it” small LED light on the front. When opening / closing the case it will illuminate white or red when battery life needed.

The PowerBeats Pro earbuds are ear hook style which wrap around your ear and has an eartip that fits secure in your ear. They are some of the most secure truly wireless earbuds I have worn. There is zero chance of them coming loose or falling out/off your ears. First time out the box it does take some getting used to putting them on, well at least for me. I still often have issues putting them back in the case too. Seeing how I wear glasses most of the time I found it easier taking them off, adding these and then putting them back on. The ear hooks do give some bend which is supposed to make it suitable for different ear shapes.

There is also a variety of ear tips inside if you need something smaller or bigger. I’m using the default tips that are included on the Pros. Pros are water/sweat resistant with an IPX4 rating which means they are good for workouts.

Included with the PowerBeats Pro and Charging Case is a lightning cable and additional ear tips.

Like Apple’s AirPod 2nd Gen, the PowerBeats Pro are driven by Apple’s H1 Chip.  This provides PowerBeats Pro with a significant amount of battery life.

Each earbud is slated to provide 9hrs each while combined with the case will give you a total of 24 hours. A 5 min charge will give you 1.5hrs of battery if you are in a pinch and need to run out.

PowerBeats Pro also utilize Bluetooth 5.0 giving you a nice distance away from your device but also helps with minimizing and eliminating distortion. Pros sync as soon as you open the case and you will get a notification on your iPhone showing battery life for the case and earbuds like AirPods.

PowerBeats Pro do provide some cool features such as having sensors on each ear so when you take them out your ear music stops and putting them back in your ear things resume instantly. There are also volume toggles on each ear and each “Beats” button allows play/pause options while holding will activate Siri. Using this with Android will give you the option for Google Assistant.

Also, the PowerBeats Pro earbuds can be used individually. There is no “main” so you can decide to use the right or left, leave the other in the case, or even decide to pass it onto a friend for listening. This works even better since each earbud has mirrored buttons like the other.

In the music department, I expected them to sound bassy as that’s what Beats is known for. They do provide a stronger emphasis of bass then other truly wireless earbuds I have used but its not too heavy where it drowns out everything else. Vocals are on point and nothing sounds muddy. No distortion in the sound when cranked up which is a plus. I’m more surprised with them then I thought I would be that’s for sure.

Since there is no active noise cancelling you will have some outside sounds seep in. This is more noticeable say on the train where I do a good deal of music listening on my daily commutes.

Over the course of the summer I mainly used them on my iPhone XS and OnePlus 7 Pro. Trying to give them equal playtime on both platforms to see any difference. I know they will be purchased by both sides so I need to give them a nice run through on each format.

Of course, syncing is faster on iOS and got almost zero disconnect/distort. Android held it own surprisingly and is bearable besides some hiccups here and there. Battery life has been on point as I haven’t really charged them much and even the standby time not using them for say a week, they kept the battery juice intact.

Being that they hook around my ears and go inside I did find them a bit uncomfortable for a long period of time wearing them. Not unbearable or painful but after maybe an hour or so I wanted to take them out a bit. I tend to wear glasses most of the time so it could be contributed from that.

Running and workout in them is a treat and you never have that feeling of losing or dropping them out your ears no matter what the activity is.

PowerBeats Pro maybe the alternative that AirPod lovers need even if that includes about a $50 increase. It houses the H1 chip which can provide the same connectivity, stability, and giving off a better sound while having a massive 20+ hour battery life. Its gigantic case is an eyesore and defeats some of the convenient portability true wireless earbuds tend to present. Its hard to believe its for battery life when there are smaller cases giving you roughly around the same.