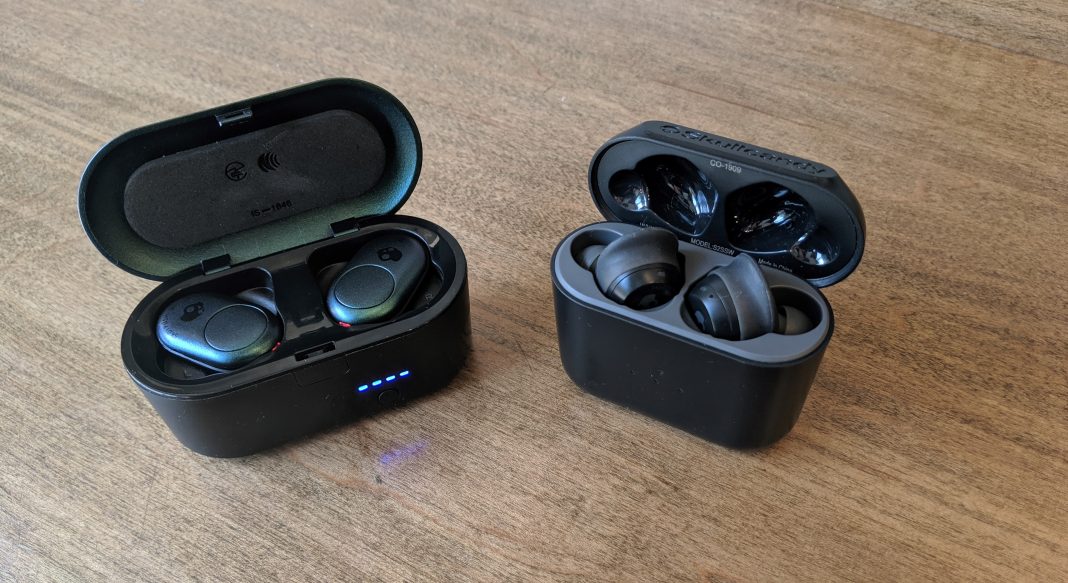 Summertime is upon us and as the heat starts hitting you want to put away the overbearing on/in-ear headphones and cut loose a bit especially if those have wires attached. Skullcandy has recently joined the truly wireless headphone arena with not one but two choices for its consumers. Those being the AirPods resembling “Indy” and the unique two-tone styling “Push”. Now I have spent the past month and change alternating between both pairs to see which the ultimate pick is and if they are truly a perfect fit for you.

While both are made by Skullcandy and are truly wireless the Push and Indy have their own distinct styling. First let’s start off with the portable charging cases. The Indy is slightly taller but not as wide casing that showcases the Skullcandy name logo on it and features three LED lights to indicate battery life. It also charges via microUSB. Push’s case on the other hand charges via the ever-growing Type C USB method but is also much wider and thicker than its truly wireless sibling. It features four LED lights(too bright) and a push button to give you a better idea of battery life leftover in the case. As far as portability I found the Indy case easier and more comfortable in the pocket than the Push size. Now’s lets get down to the earbuds themselves.

Indy’s earbuds as mentioned earlier are reminiscent of Apple’s AirPods with its similar q-tip or dongle style design. They pop right into the ear and stay secured via Skullcandy’s Ear Gels. Wearing them for long periods of time I never felt like they were going to come out which is a plus and didn’t really feel any discomfort. Indy is touch sensitive on each ear and that can be used for pairing, volume control and changing tracks.

Push is also equipped with ear gels, but they call them FitFin. They take a unique approach as the earbuds sit upward in the ear canal and has the curve fitting to sit secure in your ear. It has a distinct look then the norm but an interesting one. With this they didn’t hang from your ears or even protrude out too much looking bulky. Push feels push buttons on each ear that range from volume controls, call answering and assistant. Wearing them was cool but they didn’t feel as sturdy in my ears as the Indy.

Both come with charging wires and two additional earbud tips to suit your size. Surprisingly enough though the Indy doesn’t come with additional Stability Gels but the one installed size. As far as durability Push are slated as water resistant while Indy carries an IP55 rating saying it can resist sweat, water, and dust.

Of the two I like the look of the Push better with it upwards vertical positioning and two-tone color blending. I did feel the Indy stated in my ears slightly better though.

Battery life on the other hand goes to Indy. I can’t remember the last time I charged them as they boast an accurate 16hr battery life total including the case. On the other hand, the Push slightly hover under that giving a decent 12hrs.

As far as connection goes, the newer Indy uses Bluetooth 5.0 while Push is rocking 4.2 BT. It shows as I have had cases of more dropouts with the Push over the Indy. Also, Indy tends to connect to my smartphone right away soon as I pull them out the case while the Push is hit or miss, and I must sometimes power one or both on for connection.

Audio wise the Indy are utilizing 6mm drivers while the Push are 9.2mm in size. Neither one features noise cancelling but I wasn’t expecting as much from them anyway. Since they go right in the ear, they do a decent job of blocking out some outside noise with the Indy I felt was slightly better.  As far as sound quality goes, both have okay sound but nothing to rave about. Push is the bassy, more clear of the two that’s for sure. Indy can sound slightly muddy and muffled at times. Using them to watch content though I didn’t really get any delayed audio synching which a is plus.

With Skullcandy’s first iterations of truly wireless I felt like they hit on some marks and missed others. Battery life is nice on both, but the edge goes to Indy, also Indy has better BT connection as well. Aesthetically and audio wise, Push is the better of the two. While its case is bulkier it does utilize Type C which has garnered my attention.  Both are under $100 with the Indy being $79.99 in four colors while the Push slides right under that price range at $99.99 with four colors as well.  In the battle of the two I’d have to select the Push. But as mentioned the Indy has some things, I like better. In the end hopefully Skullcandy can combine elements from the two and look forward to the next styling down the line.

Skullcandy has also introduced what they call “Fearless Use Promise“. Its an insurance of sorts. If you lose or damage either the case or earbuds, you send the remaining pieces back and pay a fee and Skullcandy will send you out a fresh set.

For Indy, losing or breaking your bud or case will cost:

For Push, losing or breaking your bud or case will cost: