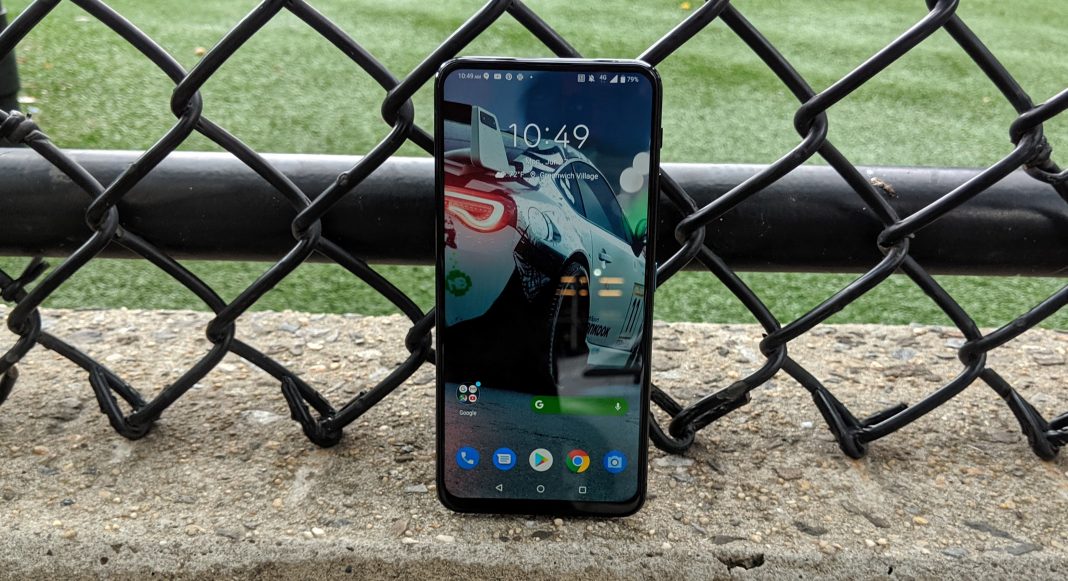 Its been a decent smartphone year thus far giving us some astounding hits in the Samsung Galaxy S10 series of devices and the underrated favorite OnePlus 7 Pro. So, when I initially heard ASUS had their usual ZenFone coming out I brushed it off as okay cool whatever. But then I had a quick sit down with ASUS’s Director of Media Relations Randall Grilli who gave me a first hands-on and quick run through with their latest ZenFone 6 and my thoughts quickly changed. Gone was the boring design and the gimmick of a camera seemed to be more serious than expected. I spent the past month using it as a secondary and ultimately as a main driver and I been rather surprised at the results, especially at its price tag.

The ZenFone 6 is a shiny piece of glass that fits in my hand nicely while it is also slightly slippery as well. Its glass back is smooth to the touch and isn’t prone to getting much fingerprints which is great. ASUS was nice enough to provide us with the Midnight Black colorway which feels like it has a blueish tint to it at times depending on how the light hits. Also, on the back is the ASUS insignia. This change in design for the ZenFone series seems to be inspired from their gaming ROG phones and its greatly welcomed. Also back there is a fingerprint sensor and the star of the show which is the Flip Camera which we will talk about later.

ASUS managed to keep the left of the phone free of buttons sans that hiding Dual-SIM/microSD tray. On the right houses a Power Button, Volume Toggle and Smart Key defaulted at Google Assistant. You can map it out to being anything you want so you can get to your fave app at any time.  Bottom has Type C port, speaker and 3.5mm Headphone Jack. Yeah you aren’t forced to be wireless with the ZenFone 6.

Included with the ASUS ZenFone 6 besides the usual AC adapter and Type C is wired earbuds and a plastic case for protection.

As for the screen you are getting a 6.4” Full HD+(2340×1080) IPS NanoEdge Display. With there being virtually no bezel and camera, the screen takes up 92% of the body. Its coated in Gorilla Glass 6 and like the back side isn’t a fingerprint magnet. It seems to hold up well not getting any type of scratches as I have no screen protector on it. Display is colorful, sharp and is fine for reading, navigating the web and taking in some content. I have watched a good amount of media ranging from Netflix, YouTube and playing the occasional mobile games here and there. Some may want a higher AMOLED display but I think this one will supplement your needs for the time being. I feel it keeps the cost down as well.

There was no skimping on processing power in the ZenFone 6 with it rocking a Qualcomm Snapdragon 855 CPU chipset alongside their Adreno 640 GPU. Its backed by 8GB RAM and a healthy amount of storage in 256GB. I can’t think of a time this device skipped a beat and kept chugging no matter what I was running on it. Playing games like Fortnite and Asphalt Legends 9 run without hiccup. Phone does get a slight amount of warmth from intense playing. Built-in screen recorder used to capture video of Asphalt Legends running on the device can be seen below.

Besides having some of the latest and greatest mobile hardware its also hiding a mammoth 5,000mAh battery. I never used a phone with this size battery and the fact it is using a 1080p display helps this ASUS device keep you unplugged for a couple days with moderate usage. I was fairly impressed with this and even with intense times I put it through its paces I had a ton of juice left. If you need to power up it does support Quick Charge 4.0 which will get you back up quick.  ZenFone 6 is equipped with dual speakers that produce adequate sound with most firing out the bottom speaker. There are earbuds included ASUS is calling ZenEar Pro which are actually tuned by audio headphone maker 1MORE. You can use these or any frankly to take advantage of DTS:X Ultra that the phone is equipped with. If you go the Bluetooth route, they support AptX HD and LDAC for Hi-Fi.

For network service I been using my own provider T-Mobile. It is dual-sim and I popped in a Verizon sim but doesn’t look to support it. Besides that, I have been able to get 4G LTE, but service isn’t hitting like on the OnePlus 7 Pro and Galaxy S10+ which is using the same service. I have done side by side speed testing and notice areas which reception wasn’t as good. I believe that’s due to lack of bands on this device. ASUS does show three versions on their website tech info, so I imagine I’m using “Version A” which is missing a great deal of U.S. bands. Also, there is no Wi-Fi calling which is unfortunate as its heavily needed in my dead zone of an apartment lol. Now these may not be necessary for you but best to check the support on the phone beforehand.

ZenUI 6 is running on the ZenFone 6 and is compromised of Android Pie. It feels very vanilla based without being heavy or bloated and runs smooth. Its simple and easily adaptable. Its not complicated or has too many bells or whistles. That may work for or against you depending on your tastes. No crashes or freezes on this side so it’s a plus. Also, no issues running any apps whether from the Google Play Store or sideloaded.

We are at what’s been the big conversation piece of the ASUS ZenFone 6 which is its camera. Its not that it’s a dual lens with one being a Sony IMX586 48MP shooter accompanying a 13MP Ultrawide camera but that you can use those on either side of the phone. This is because of the flip camera tech that sits fluid in the device.

It’s a crafted liquid metal alloy that has a stepper motor that rotates the camera from back to front and back again.  Its pretty quick and using it over the past month has been on point the whole time. It hasn’t gotten stuck or become non-responsive in any activity. There is also a drop sensor so if the phone feels it is falling it will rotate back into place if out.

So how do the photos look? It’s a star in the selfie department. You are getting a high-quality lens usually dedicated for the back of the phone right in your face. Images come out sharp and detailed even in portrait mode. Using the phone itself to snap photos I feel are hit and miss. I think it takes some color eyepopping shots but that’s when you can get it focused even though it has Laser Focus. There is no OIS so any shaking will have you tapping the screen. Especially for those without a steady hand. In night and low light shots it is manageable as I used it in bars and outside at concert venues. ZenFone 6 does a cool “auto panorama” where it rotates out automatically and help you get a killer view without even having to move your arm and even include yourself in it.

Recording video at the Governor’s Ball in 4K, video quality was stellar, and audio was crisp and didn’t pick up or create any distortion even with all the things going around it. The Flip Camera is a fun and welcome camera feature and hope ASUS continues to improve on it and include it in future devices.

With all this said, I was rather surprised with the ASUS ZenFone 6. It packs a great deal of hardware and has a fun and rather great picture taking flip camera equipped with it. It does have a 1080p display but that does help the killer 5,000mAh go on for days and I don’t think you miss it much. Now what’s the cost? Well the ASUS ZenFone 6 starts at a surprising $499 for the 6GB/64GB model and tops out this version for $699. If you are looking for an alternate to the Pixels and Galaxies of the world you might want to look at the ASUS ZenFone 6.