This past weekend, I got my game on and played a few games. One of those games that I dove head first into was Anthem. There’s been a lot of hype and fanfare about Anthem and I finally got to see what it was all about. My feelings on the game are mixed but not negative. This is over the course of I would say 12-14 hours of total gameplay and using each javelin. I can say that Anthem is a really good game but I’m not sure if it’s a must have game. To be fair, my thoughts at the moment are based solely on the demo and that experience. My opinion will probably change once I play the full version. So, for now, I would say take my opinion with a grain of salt. This my impression of the Anthem Open Demo.

Anthem is an open world experience 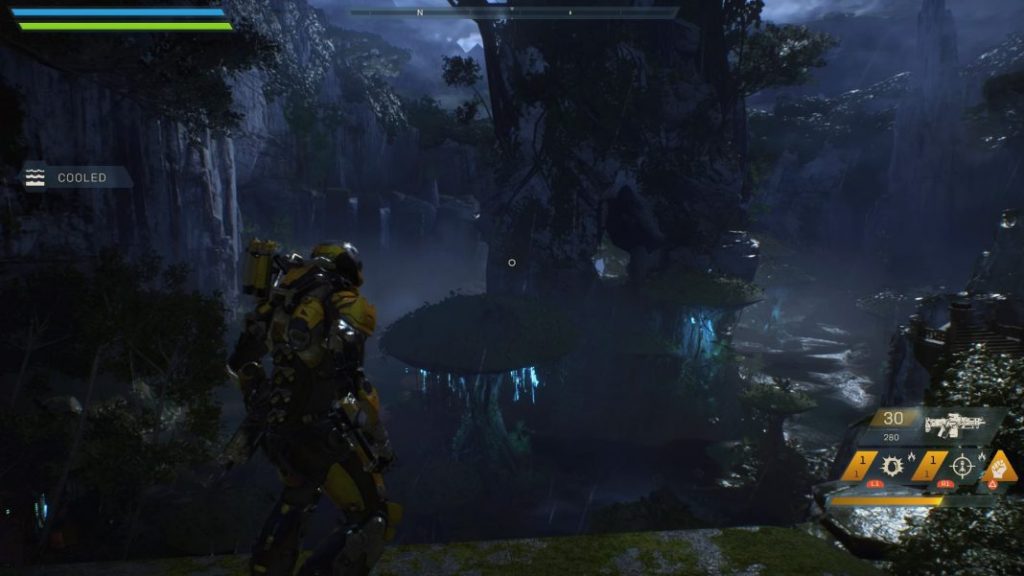 When you jump into your javelin and do either a freeroam or an expedition, You see the beautiful scenery that the game provides and you truly get a sense of what the Anthem world appears to be like and the environment you’ll be going to battle in. Your javelins can fly pretty much anywhere. Up, down, through caves and crevices, even under water, so at the very least the game gives the impression that it’s very much an open world and this is a good thing. When I was trying to get my bearings and figure out exactly where to go I got a sense that this world that we’re in is quite large with so many places to explore. I don’t know if there are any other destinations like other planets that will come into play but the demo world that I played in was pretty big.

Gunplay is better than I thought

My biggest worry for Anthem was the gunplay. Over the years I’ve become more and more accustomed to first-person gunplay. I find it to be more engaging, more accurate, and just a lot more fun overall. When EA and Bioware decided that Anthem would be a third person style looter shooter, I was apprehensive. In my experience with third person shooters targeting isn’t that easy to control, gun recoil isn’t ever really properly take into account so usually you’re fighting with your gun to keep it straight to hit your target or it doesn’t always react fast enough to the direction in which you’re shooting. Thankfully, this isn’t an issue with Anthem. I found the gunplay to be pretty damn good. Targeting was simple enough and I didn’t waste bullets very often when aiming down a specific target. Truth be told, gun battles and the gunplay is my favorite aspect of Anthem.

Anthem has 4 Javelins which is basically the suit you jump in to do all of your fighting and flying. In Anthem, which most of us know if you’ve been following the game has 4. The Storm, Ranger, Colossus and Interceptor. Each Javelin has different attributes and things which make them overall unique not only to the missions within the game but your play style as well. I personally loved the Colossus which is the tank style Javelin. Lots of guns and armor and it’s the biggest of all the Javelins. The Storm and the Ranger Javelins by my own assessment are probably going to be the most popular Javelins because of their balance and ability to battle at distance. The Interceptor is super quick and it’s a really good support Javelin. I see a certain group of people running with that character. I might just give it a shot.

Customization in Anthem is cool. Who doesn’t like to customize? Although customizing your Javelin was very limited in the demo, you can see the potential. Customization is also not restricted to your Javelin. You can improve on existing weapons, craft new weapons and parts, make armor and the weapons you happen to like more powerful as opposed to having to abandon them altogether because your current weapon isn’t strong enough. Everything that you can use in the game can be enhanced. I love that.

The last part of the customization is of course, painting and colorways. You can paint your Javelin a bunch of colors or just one solid color. Whatever makes you feel like you have a kick-ass Javelin with its look. Paint it that way. You can do it here.

Consensus opinion may have you believe that Anthem is a game trying to be a Destiny clone or be a Destiny like game. After putting Anthem through it’s paces and really going through some events and joining up with friends (who are coincidentally a part of my fireteam in Destiny) I can say in no uncertain terms that Anthem is NOT like Destiny and I don’t think it’s trying to be. I think the folks at EA and BioWare would like what Destiny has in their large community and overall fans but trying to do what Destiny does is not the impression I got. Truthfully speaking, I found that Anthem had more similarities with The Division than Destiny. The third person aspect, the open world style of play, more specific customization and the overall detail of the environment which is reminiscent to the detail in The Division. I guess the comparisons can be attributed to the sub-classes of the javelins, certain abilities and things like the ultimate which would be comparable to the supers in Destiny. Fort Tarsis could be viewed as a similarity to the Tower in Destiny but what game of this type hasn’t had a homebase? This is where the similarities stop for me. I never felt like I was playing a Destiny like game but that’s me. If anyone feels different, I’m not mad at em.

Is Anthem a must have game?

Based on my time playing Anthem, I can’t say that it’s a must have game but ultimately it’s up to you. It’s a good game, no doubt. My time with the demo was good. There were some reported issues with the game from the beginning but luckily for me I didn’t experience any. The game was fun and I could see why people would want to play it. There are things about the game that raised my antennas. For one, the story. What is Anthem about? I didn’t catch it. It will probably be more clear when I play the full version but as for what I played, I have no clue what the game is about. End game content could be a problem but I won’t judge that yet either. Something that has typically plagued games from EA is the inclusion of micro-transactions. From what I’ve heard micro-transactions will only be for cosmetics and if that’s the case then I’m okay with that. I wonder how new content will be added and I’m hoping that any DLC isn’t too spaced out and remains mostly free. I paid for some bad DLC from Destiny. If I’m immersed in Anthem then I don’t have a problem with paying for DLC here just not all of the time. My last concern is the timing of the Anthem release. It’s so close to the Division 2 release and it may prove to be a gamble so hopefully Anthem builds up enough buzz to keep players coming back despite the Division 2. Anthem drops officially on Feb 22nd for Xbox One and PS4. Look out for it.