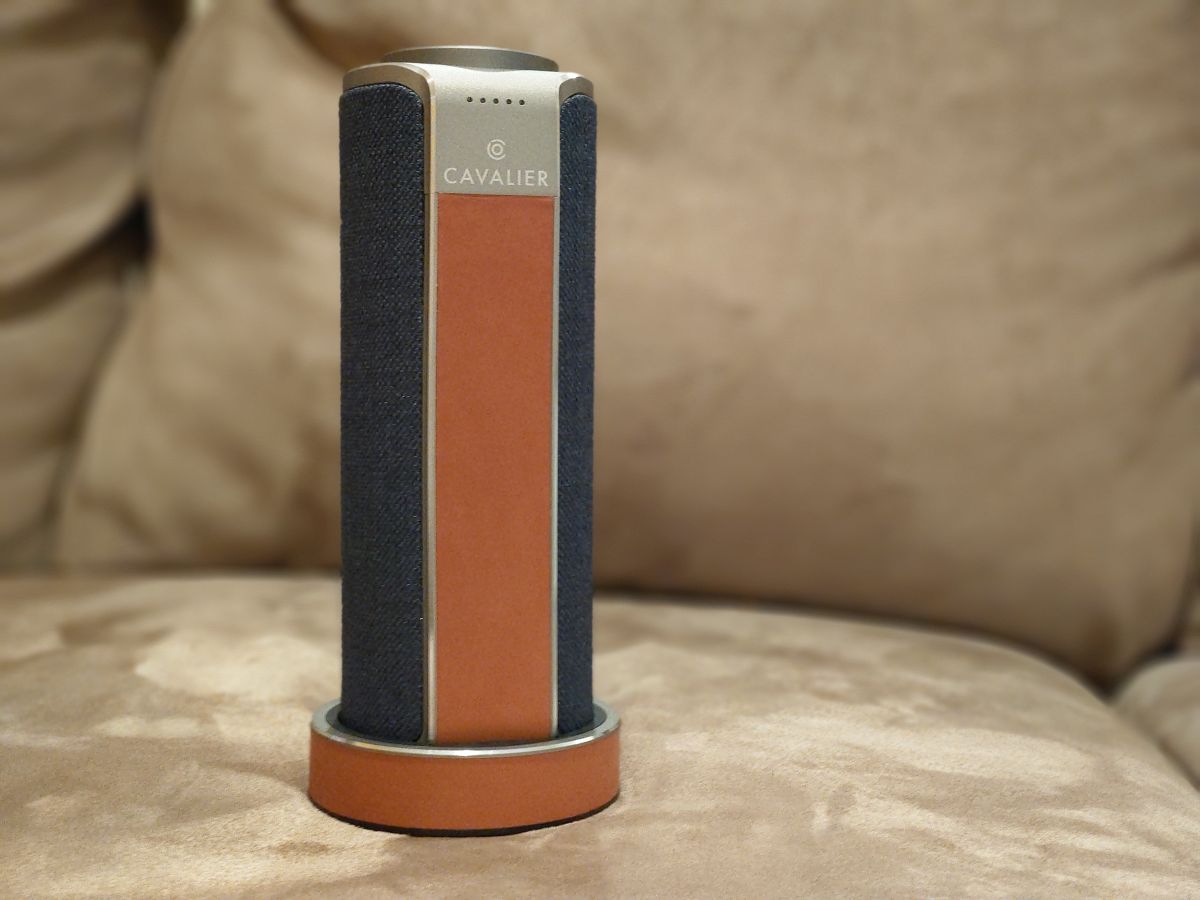 Portable speakers are a dime a dozen these days and in order to stand out from the crowd, you need some kind of gimmick. Whether it be flashy lights or big bass, there has to be a wow factor that’s gets people interested. One of the biggest “it” features I think these days is a portable speaker that integrates one of the big three smart assistants, such as Amazon’s Alexa. If you’re already using Alexa, you probably own something like an Echo or Echo Dot. While they are great products, their design and sound leave something to be desired. That’s why Cavalier created The Maverick. The Maverick is a premium smart speaker that has Amazon Alexa built-in. 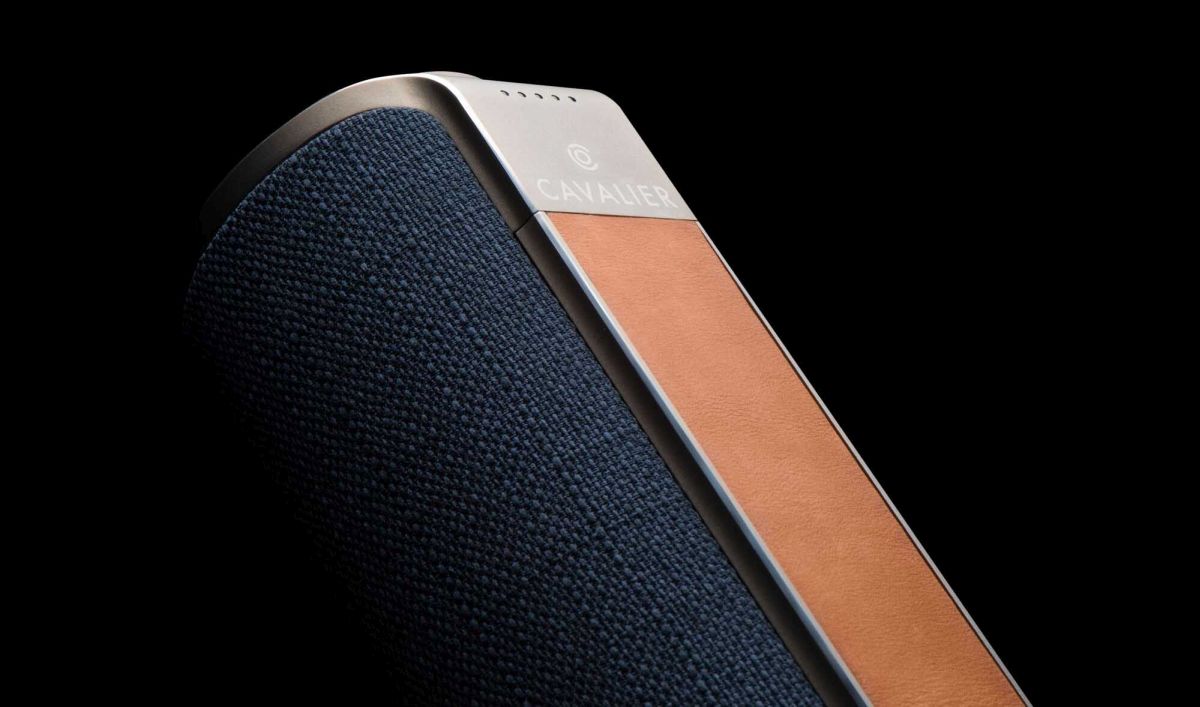 Most smart speakers you’ve seen are pretty plain and kind of cheap looking. The Google Home isn’t terrible with it’s plastic and fabric design while the Amazon Echo isn’t exactly what I’d call a looked either. Both get the job done but I wouldn’t call them premium. The Maverick by Cavalier however is on a whole other level compared to those two.

For starters, there’s not an ounce of plastic on this thing. The main body is made of aluminum and the edges have been machined to remove any sharpness from them. The speaker surrounds are covered in a premium knitted fabric and the rest of the speaker is accented with genuine leather. There are two different color schemes available for The Maverick and the one I have here is in a gunmetal finish with indigo blue fabric and brown leather. 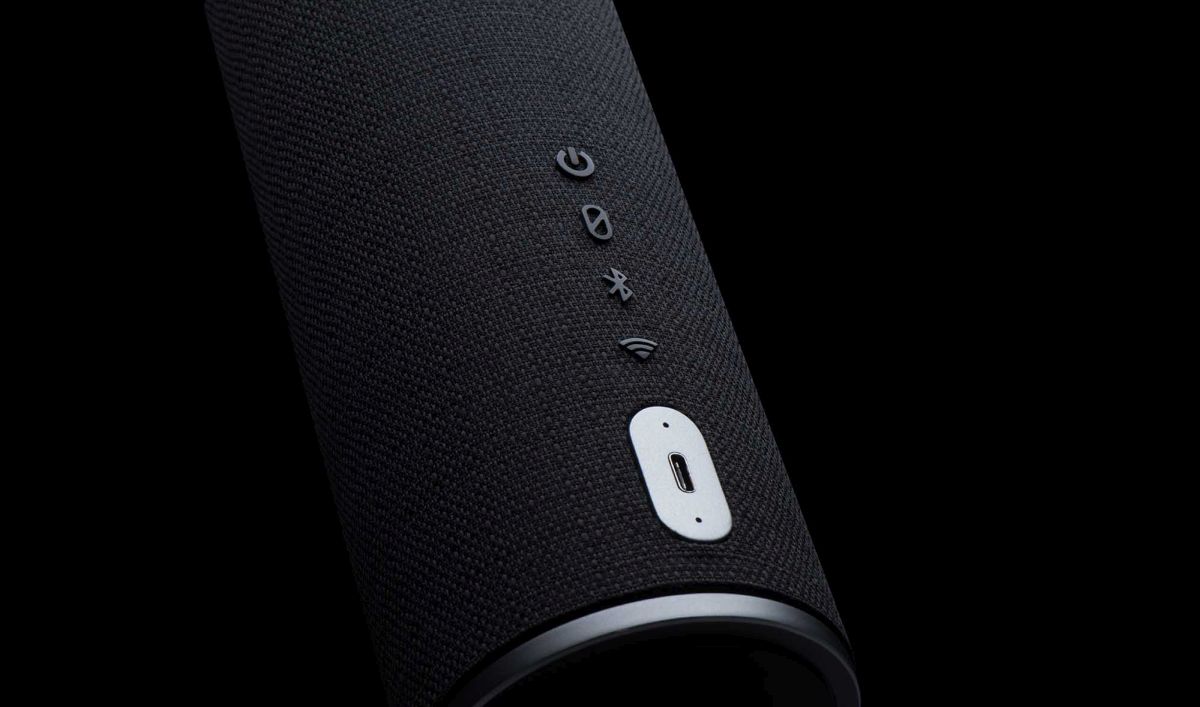 The Maverick is a tube shaped speaker that’s supposed to provide 360-degrees of audio that can provide a true room filling experience. Along the side are some integrated buttons for power, Wi-Fi, Bluetooth, and mic. The USB-C port is also located in the same area. On top is a rather ingenious rotary volume dial and integrated control touch button (more on what these buttons do later). On the bottom of the speaker are charging contacts that are used when docked with the charging base.

All of this makes for what might be one the best looking portable speakers I’ve ever used. The combination of the aluminum, fabric, and leather truly come together and make for a really elegant package. There’s even a really nice canvas case included for travel. 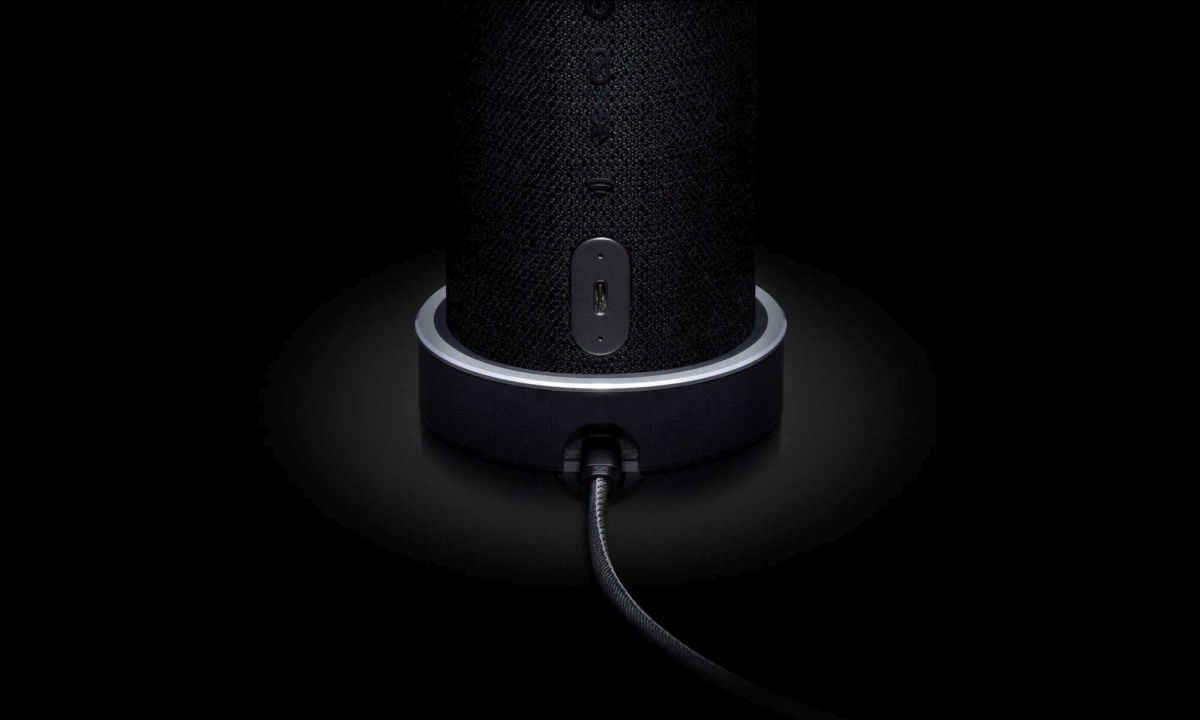 For starters, to get the most out of Cavalier Maverick, you’re going to need to download the Cavalier app (iOS, Android) and the Amazon Alexa app (iOS, Android). You need the Cavalier app in order to set up the Wi-Fi connection on The Maverick as well as setting up the custom controls, multi-room configuration, and basic setup of Alexa. You’ll need the Alexa app to setup the more advanced features of Alexa.

Once you have that set up, you’ll be good to go for the most part.

What’s great about the Cavalier Maverick is that it features both Wi-Fi and Bluetooth in one. You can’t use both at once but it makes the speaker a lot more versatile than most. At home, you would use The Maverick in Wi-Fi mode and on the go, you’d use it in Bluetooth mode. The reason for this is because in order to use Amazon Alexa and streaming services directly from The Maverick, you’ll need to be connected to your Wi-Fi network.

If for some reason you don’t want to use Wi-Fi or can’t, you can pair The Maverick with your Bluetooth enabled device and it’ll work just like any other Bluetooth speaker. You will lose smart features however since Alexa needs data from Wi-Fi to work. 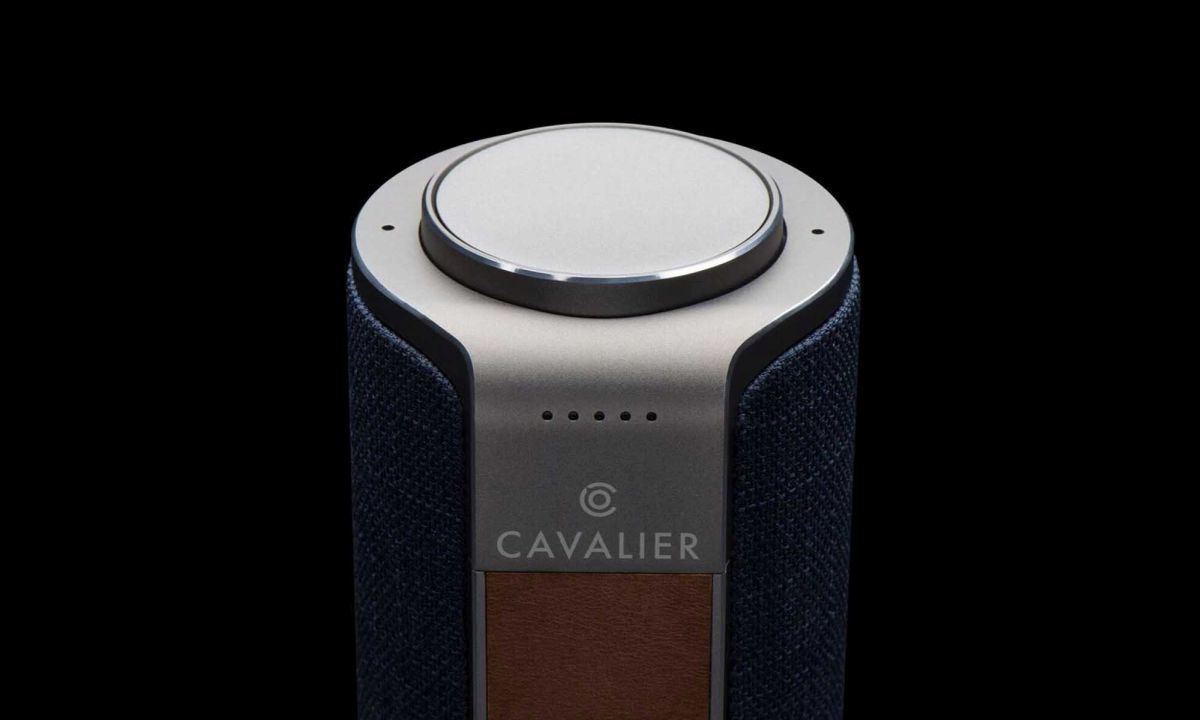 Using Alexa is as simple as saying “Alexa…” and what you want it to do. For the most part, it does pretty much everything the normal Amazon Echo does with Alexa functions. If you would rather not have The Maverick listening all the time, you can press the Mic off button on the rear and it will no longer take voice commands from you. Instead, if you want to activate Alexa, just tap and hold the top touch button until the little lights pop up and then speak your request. While on the subject of the button, there are other things you can do with it. If you tab it once while music plays, it pauses, Tap it again and it resumes. If you tap it twice, it’ll skip to the next song. If you tap it three times, it goes back to the previous song.

If you want to charge the device, you can use the USB charging port on the speaker. However, the simplest way is to have the charging dock somewhere in your home and when it needs charging, just place The Maverick on it. If it’s a place where you normally use it at home, even better because you’ll pretty much never really have to worry about whether or not it gets charged if it’s always on the dock. In terms of how long you can use it on a charge, it’s up to 9 hours which is pretty good for a portable speaker.

How does The Maverick sound? That’s really one of the most important questions and I’m happy to report that it sounds quite exceptional. Thanks to its four speaker set up, the audio really does fill up an entire room. No matter what genre you listen to, the audio sounds full and rich through the entire range. The mids and highs are super crisp and clean while the bass has a decent thump to it. It’s actually quite impressive. Like for instance, when I play music that has acoustic instruments, it sounds like it’s really there, being played live in my room. Let’s not even get into how clear the vocals are. There wasn’t anything I played on this thing that didn’t sound good. Lastly, this speaker can get really loud when you want it to be. 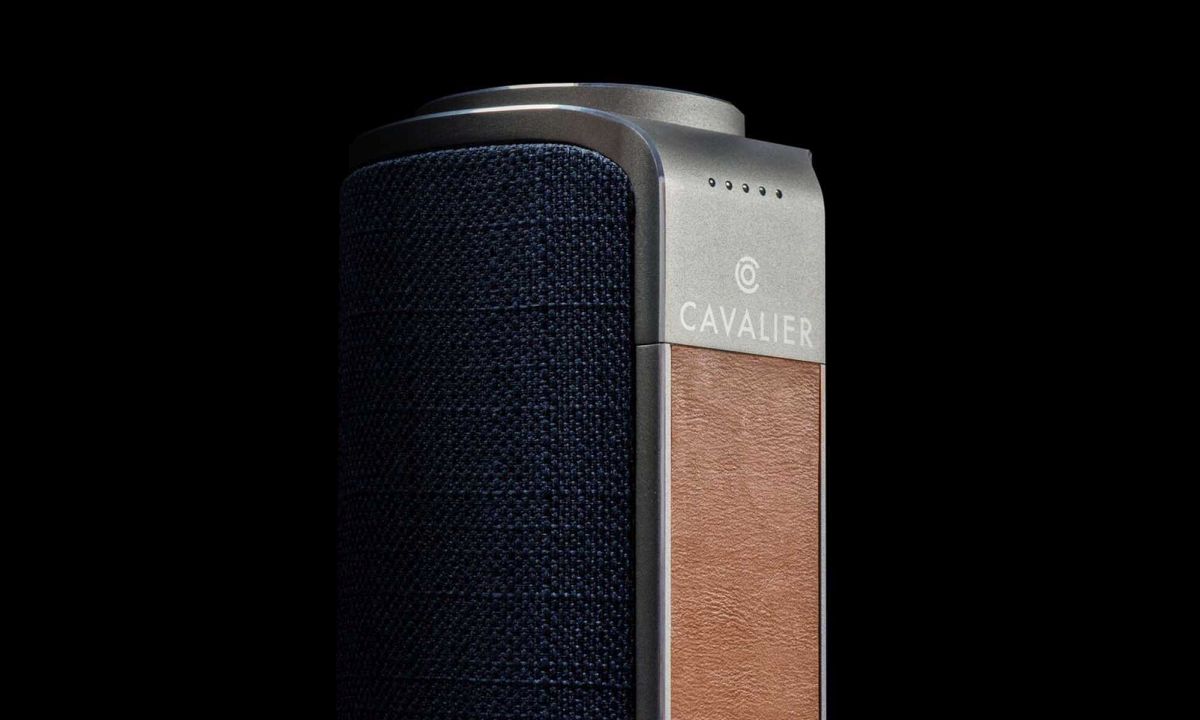 Honestly the the Cavalier Maverick is probably one of the best Alexa enabled smart speakers you can get right now. It’s got looks that blow away any of Amazon’s offerings and would be at home in any room. It’s a beautifully designed device that you’ll want to show off and not just hide away in a dark corner somewhere.

I really love the fact that it has both Wi-Fi and Bluetooth built in. It works well in both modes though you’ll want to switch between them based on how you’re using the speaker. I also really appreciate the physical controls and having them on top of the speaker makes them much easier to access quickly.

With that said, I’m a fan of Cavalier’s The Maverick. It’s made of all the right bits with superb audio that backs up its equally superb looks.