Keyboards, Keyboards, Keyboards. They’re something that we probably use everyday and for most of us, we don’t use it for anything other than typing. For those folks who have a bit more of an intimate relationship with their keyboards because they’re what we call “creatives” there is the Logitech CRAFT keyboard. This is the perfect keyboard for you if you’re one of those creative souls. Even if you’re not one of those creative type people, this keyboard is still incredible as a whole and it shouldn’t stop you from buying it.

The look of the Craft is what stands out right away. The design for the Craft is typical to what you’ve seen from Logitech before. I peronally think about the K780 keyboard but on a much grander scale when I look at the Craft. Rounded edges, smooth feel and clean with nice big buttons with a premium finish and that crown. It’s all very pleasing to the eye and it doesn’t look at all overwhelming like how some mechanical keyboards can look. It’s quite inviting and you feel like you’re gonna get some work done when you look at the Craft.

The Craft is two tone with a simple but elegant gray and aluminum colorway. The strip above the keyboard where the crown is located is brushed aluminum with the on/off switch on the far right. Although the Craft is made of mostly plastic, it doesn’t cheapen what the Craft is at all. It’s very durable with some heft but not heavy. The rubber feet on the bottom combined with heft ensure that the Craft doesn’t move or shift while you’re working. If you’re working then then that means you’re typing and the Craft provides a really good experience. The keys have a good amount of travel, not too clicky and not too mushy and the keys remain relatively silent while you type. They’re spaced well and I didn’t have many issues where I was pressing double keys. I was free to type at the speed I type in a real smooth way. This is probably my favorite part of the Craft. That motion detected backlight helps out with your typing experience too. I don’t care how much a keyboard does or doesn’t cost, if the typing experience is bad. I’ll never use that keyboard. The Craft scores points for the look and feel.

With all wireless devices, battery life is the most important thing. After all, why have a wireless device at all if the battery is only going to die on you after a short time. The Craft does a really good job of handling the battery life on the Craft without compromising really anything. Logitech estimates that the Craft should give you a full week of usage off of a full charge. Not bad. The only time I’ve charged it so far was when I first received it. Of course, charging will vary based on your usage so Logitech’s estimation isn’t crazy. I’ve had the Craft now for about two solid weeks and generally I don’t use my keyboard as much say a creator whose job it is to be on a computer all day long so I’ll get more out of a charge. Battery life is really a subjective thing when it comes to devices, it all depends on the individual needs. If you ask me however, battery life is solid.

The idea behind the Craft keyboard based on my experience with it is to be a hub for the creative not just based on the keyboard itself but with the software integration. Let’s start with the Logitech option software. Once you connect the Craft to it allows to sync it with multiple PC’s or Macs and it works extremely well with the MX Master and MX Master s2. Most importantly, it’s compatibility with the software from the Adobe suite where you’ll see the Craft really pay for itself. I personally can only speak on the two Adobe apps I use. Premiere Pro and Photoshop (somewhat). The Craft allows you to create profiles for whichever software you intend to use in the Adobe suite. If you use Premiere like me, with that profile you can almost abandon your mouse and scrub through your timeline with the crown. Crown use is limited in Premiere Pro though. You basically have the option of choosing how you can scroll through your timeline. You can either free scroll or click scroll frame by frame. It’s super important and convenient so I’m not mad at this. Software updates in the future will change this. 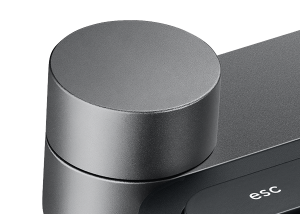 Photoshop offers a little more in what you can do with the crown. Toggling brush sizes and toggling effect enhancements are a few of things you can do. I am not really much of a Photoshop user personally but messing around with the crown within Photoshop showed off its convenience and about six different options you can use. From what I’ve seen so far, Photoshop offers the most use with the crown. Logitech is going to be adding more function via updates to support more of the Adobe suite such as Illustrator, Audition, etc. So what we have now isn’t all there will be. 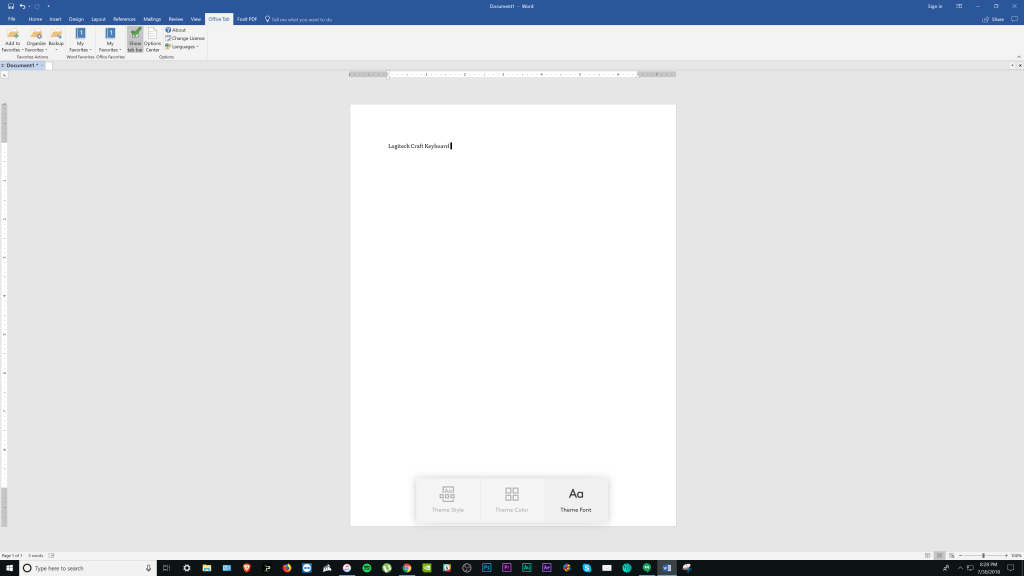 Microsoft’s app support suite is similar depending on which app you use. I don’t use every app within the Microsoft office suite but I did give it a shot for the apps I do use which is primarily Word, Excel and sometimes Powerpoint. In Excel you can scroll through columns, rows and cells with ease with the crown. With Word you can change the theme, font and font color. Powerpoint is almost the same as Word in terms of the options that you get to control with the crown. The only addition is the layout option whereas you can scroll through the layouts for your slides. All in all, the crown is pretty cool with the Microsoft suite just as it is with Adobe. Again, we should hopefully see more improvements in coming updates.

Using the Logitech Options software really gives you detailed info of what you can do with the Craft in terms of programmable keys and the functions of the crown. You can make adjustments to the scroll, jog scroll and press on the crown. You can program (to some degree) the crown to the apps on your desktop although it doesn’t play nice with everything. You can program your function keys and pair the craft with up to three different PC’s or Macs with the unifying USB adapter. The relationship with different kinds of software is the Craft’s best attribute and it’s what draws you to it.

FINAL THOUGHTS ON THE CRAFT 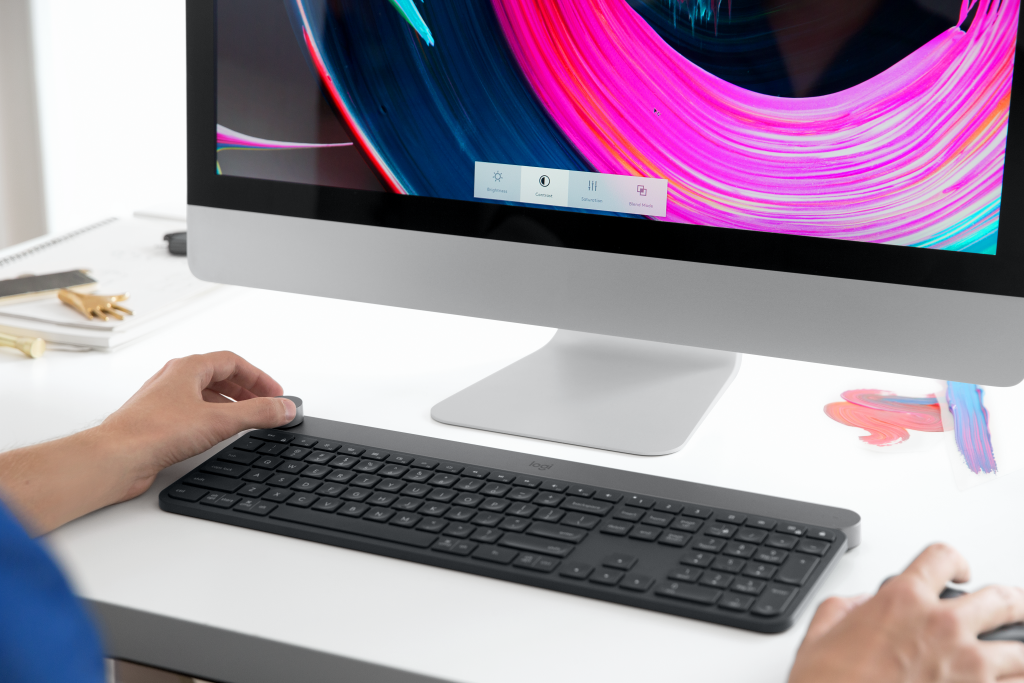 First things first. The Craft is somewhat expensive. At $200 it’s not small change but the Craft is not just a high priced mechanical keyboard that has no other function than for gaming use. The Craft offers you a lot for that money whether you’re a creative or not. It’s all about the crown. Being able to switch tabs just by turning the crown as opposed to constantly clicking and moving the mouse is a plus. Raising and lowering volume is a breeze because of the crown. Adobe and Microsoft are much easier to use when you create the profiles for them in the Logi software and use it with the crown. This keyboard is all about function and convenience. It’s only going to be a matter of time before Logitech improves on the software and allows more applications to be used with the Craft. There’s so much flexibility to come and you should at least invest in that potential.

It also helps that the Craft pleasing to the eye and looks great on any desk. Creatives will love that and so will the “normal” people. This keyboard will suit anyone’s needs and if you couple it with an MX Master s2 mouse then this keyboard is so much more fun to use. I can’t find one good reason other than maybe the price why anyone shouldn’t pick this keyboard up. I’m a little late to the party in reviewing the Craft but better late than never. As of this moment this keyboard is my daily keyboard for everything and I’ll be using it for quite some time. My recommendation to you? If you don’t mind spending $200 bucks, get yourself one and you’ll understand why this keyboard is so dope. Head over to Logitech and pickup the Craft HERE and the MX Master s2 HERE