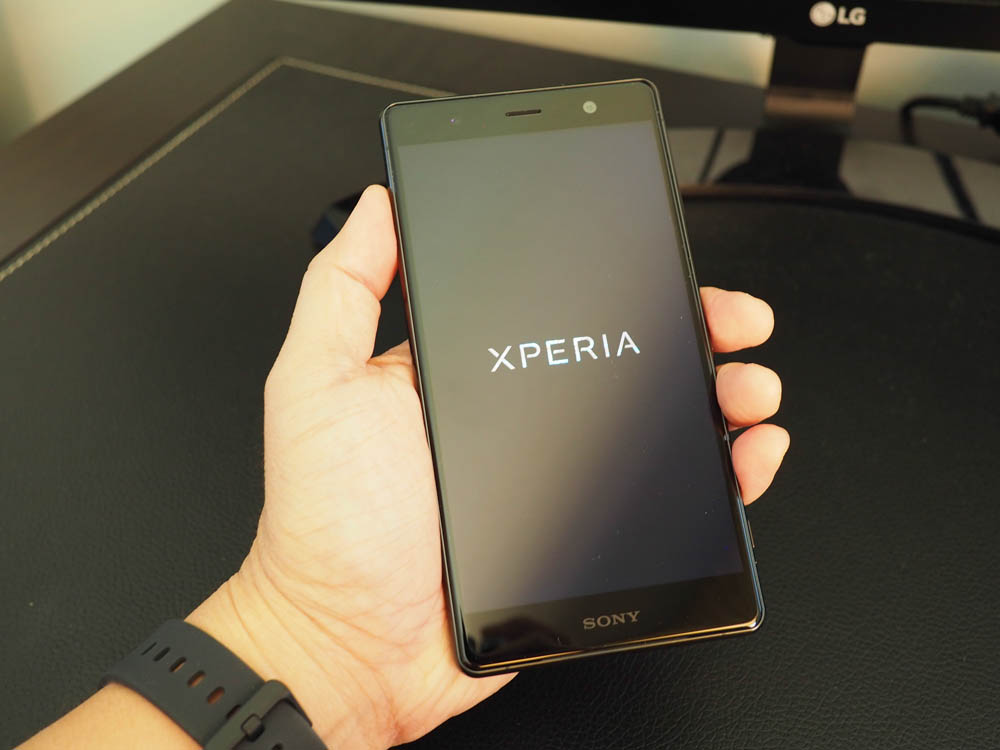 I am not a fan of when companies come out with a supposed flagship device and then a very short while after, come out with another device that is even better. As a consumer, I’d be pretty well pissed whenever that happens because what I assumed to be the best, really wasn’t and if I had just waited a few more months, I’d have the best. That’s the reality with technology however and what you get now is not going to be the best down the line. My issue is when “down the line” is in such a short time. Take for example the Sony Xperia XZ2. This was released in April of 2018 and in just 3 short months after that, Sony will have released the Xperia XZ2 Premium, slated for release July 30th. 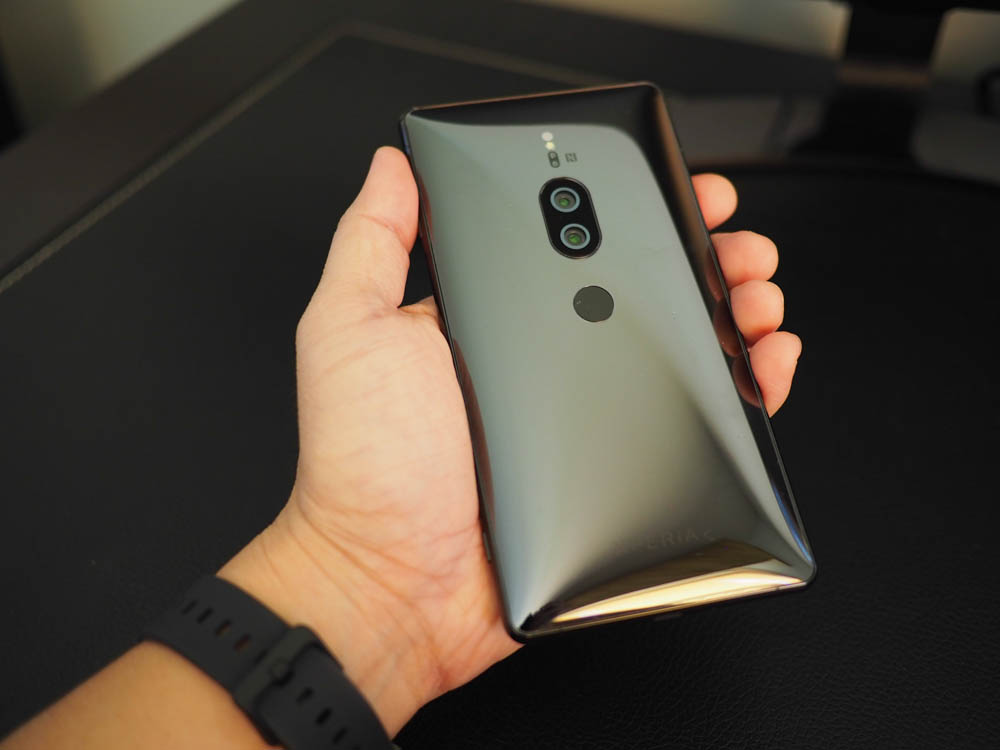 For the most part, the new Sony Xperia XZ2 Premium doesn’t really look all that much different from the Xperia XZ2. At a glance, they look pretty much the same but put them side by side and you’ll notice the subtle differences. The Xperia XZ2 Premium is a slightly larger device. Not surprising since this does have a slightly larger screen. The other difference comes at the rear of the device where you’ll notice now that there are two cameras sitting there instead of just one.

The face of the Xperia XZ2 Premium is still super clean with just glass filling up all the space and this device still features the two front facing speakers. There’s still only one “selfie” camera up front and no physical buttons.

On the sides, all the buttons are still located on the right side of the phone along with the dedicated camera button. Up top is the sim card/memory card tray and down at the bottom is the USB-C charging/sync port.

What I really do like is what Sony did with he rear glass here. The “black” color I received has a rear color called Black Chrome and it’s really a stunning looking color. It has a very mirror-like look to it with a light tint of black. So it’s not super shiny like full on chrome, but it’s also not super dark like regular black. It looks really nice and very premium.

Again, for the most part it’s a super clean design that doesn’t diverge much from the regular Xperia XZ2. You’d be hard pressed to spot the changes at a glance and would only know the differences on closer inspection. 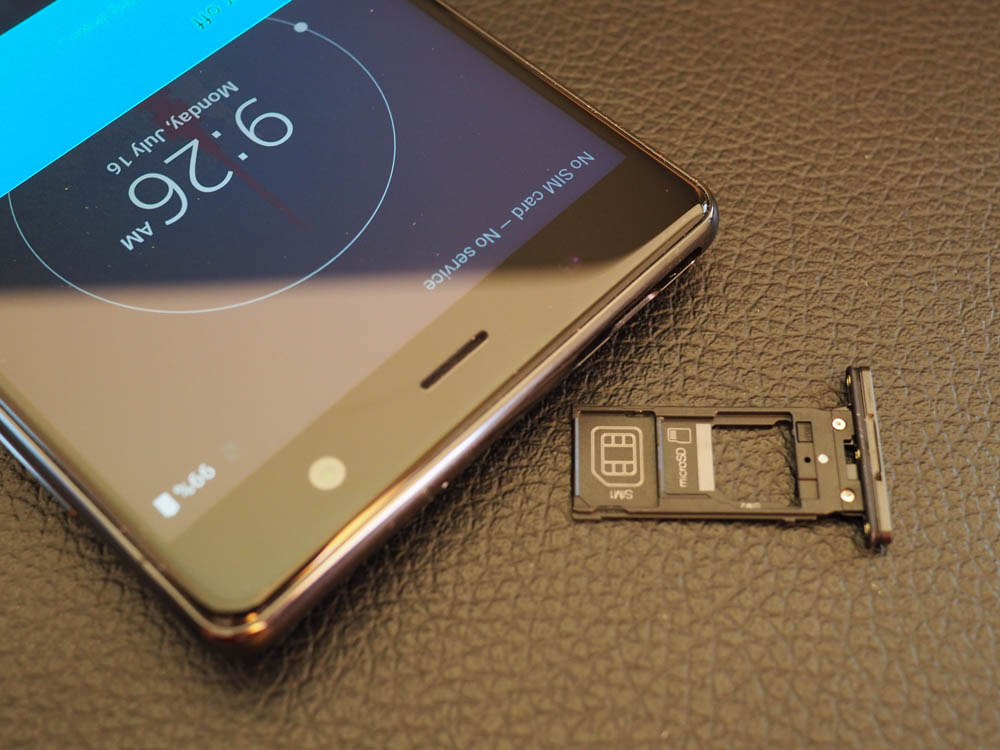 Note the 6GB RAM instead of 4GB like in the regular Xperia XZ2 as well as the display which can display 4K HDR content. The battery on this thing is also much larger.

I’ll get into the cameras a bit more later in the review, but it’s got Motion Eye Dual camera 19MP and Black & White 12MP in the rear as well as a 13MP front facing camera.

So as you can see, the Sony Xperia XZ2 Premium is pretty comparable to many of the current flagship devices out there right now with a couple standout features not found on other phones. It’s also sporting Corning Gorilla Glass 5.

The Xperia XZ2 Premium comes with Android 8.0 Oreo pre-installed.  Like with most unlocked devices, you’ll most likely need to do a system update or two when you get it. That’s the one thing with unlocked devices you’ll notice over phones that are carrier locked. They seem to get way more updates more frequently which is a big plus when it comes to buying an unlocked device. Next up, this isn’t stock Oreo. Sony has placed their Xperia Home launcher on top so the experience will be a bit different than those coming from other devices. It’s not difficult to get used to but the Xperia launcher does have its quirks.

The launcher does allow for long tap shortcuts like most of the Android 8.0 phones let you do now. The shortcuts you get are tied to the apps and what they allow you to do. For the most part, the Xperia launcher does function very similar to stock Android, but with a few little tweaks that you may or may not like, but it does seem like you can change how they behave. The Xperia launcher also includes Google Feed as it’s default news source on the home screen. It’s not bad and an easy way to keep up with trending news, but you can disable it if you don’t want it.

Like I stated above, there are some quirks too. One is that when you’re in the app drawer, usually dragging an icon will automatically assume that you want to move it to the home screen, but in the case of the Xperia, it just moves it around the app drawer. Instead you have to drag it completely all the way up to this little area that says “add to home screen.” This is by default. You can however change this if you go the home screen settings and change it to “quick add icons.” Also, the icons auto arrange by default. If you move an icon on the home screen, the other icons will shift on their own. Again, you can change this behavior in the settings to be like standard way. These are just little quirks that you come across and if you don’t know that you can change them, they can be very frustrating.

The Xperia XZ2 Premium also comes default with SwiftKey Keyboard installed as the default keyboard. I hate it. I’ve never liked using it and I’ve seen it as the default on other devices too. Luckily since this is Android, you can change it to whatever you want and in my case, I always go for Google’s Gboard.

Lastly, and you’ll actually like this. Sony makes it pretty easy to install themes for your Xperia XZ2 Premium. Like all Xperias before this, you can grab featured themes from either the Xperia Lounge app or directly from the Google Play Store. There are tons and tons of different themes for you to use and you can apply them in the appearance tab of the settings menu. 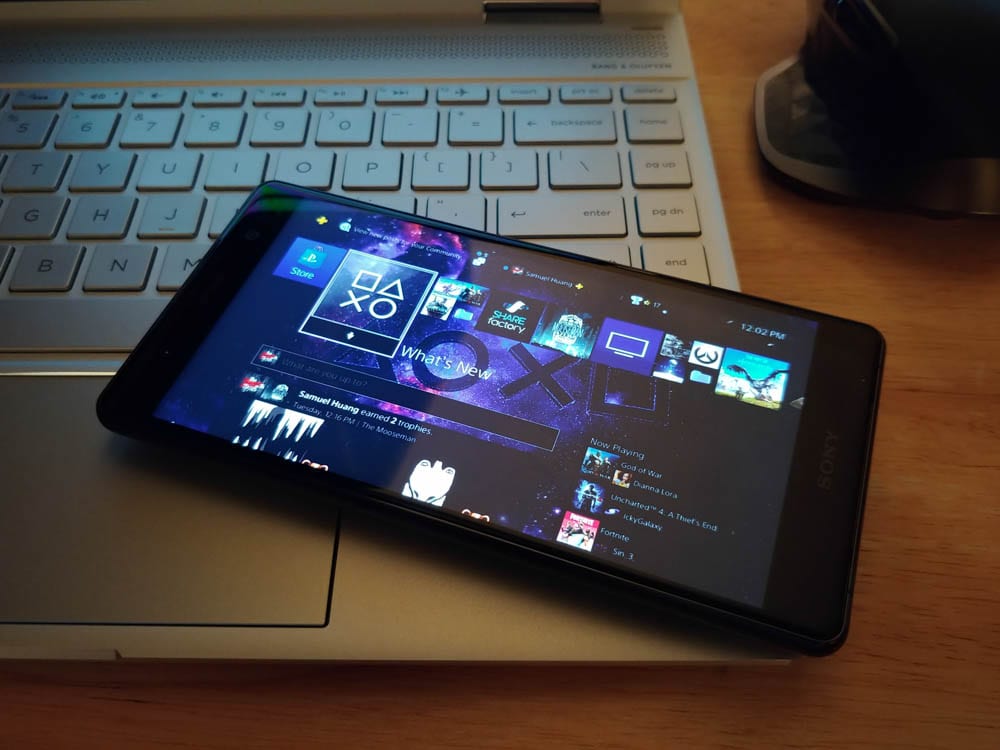 Oh and before I forget, since this is a unlocked device that isn’t tied to any carriers. There are absolutely no carrier installed apps on it. There’s also not a lot of bloatware other than a few Amazon apps pre-installed and AVG Protection. There’s also a host of Sony apps installed, but most can be uninstalled if you don’t wish to use them. I do however recommend downloading all the PlayStation related apps.

I say this because the one killer feature high end Xperia devices have is the ability to run PlayStation 4 Remote Play natively. These are pretty much the only devices aside from the PS Vita and a Windows 10 machine that can run this.

In terms of swiftness, everything works pretty quickly here and might be due to the combination of the Snapdragon 845 and 6GB of RAM. 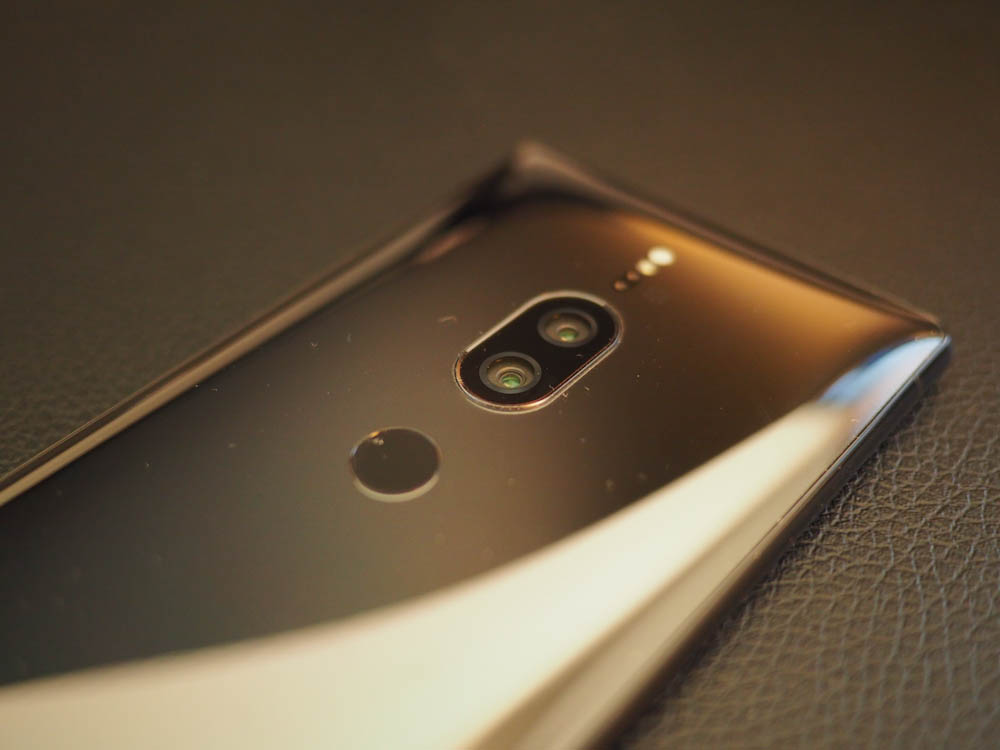 Still one of the best features is that dedicated camera button that does make shooting photos seem more natural. It allows you to activate the camera from any screen as well as when the phone is in standby mode. Once the camera app is open, you use the camera button to snap photos. I also love the fact that the volume buttons are then used to zoom in and out, just like on a real point-and-shoot camera.

These two cameras are also supposed to allow for some incredible bokeh and monochrome photos, but those are not quite ready and will roll out later this year via a software update.

In terms of photo quality, it’s getting to the point now where most flagship devices are going to give you great photos no matter if it has one camera, two cameras, or even three cameras. The average person isn’t going to tell the difference. With that said, the photos from the Xperia XZ2 Premium are very good. Colors really pop and a lot of detail is retained. In darker situations, the Xperia XZ2 Premium seems much more capable than the regular Xperia XZ2 and that’s most likely due to the dual cameras and the AUBE fusion image signal processor. Colors look pretty accurate and I don’t notice quite as much noise in low-light and a lot of the details seem to be retained as well.

To view more photo samples, you can check them out here in my Flickr album. 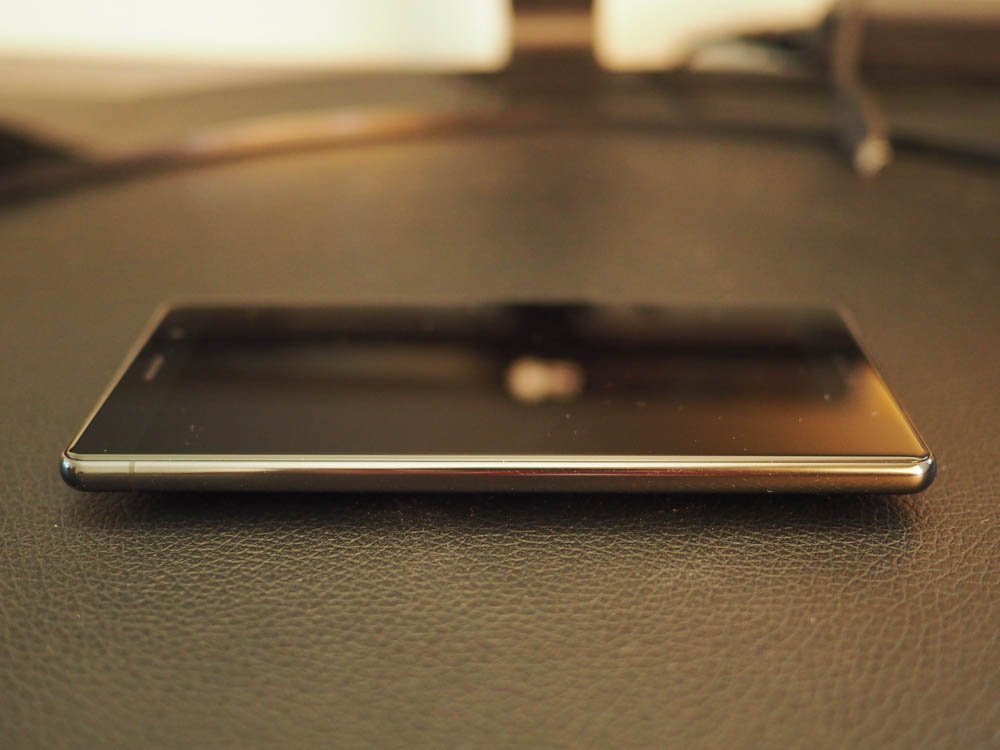 The Sony Xperia XZ2 Premium fixes a few of the issues I had with the original Xperia XZ2. Mainly that there are now two cameras in the back, matching pretty much every flagship smartphone out there now. Although, the 2nd camera isn’t quite used for what you’d expect it to be used for. It’s neither a zoom lens or a wide angle lens and instead seems to be currently more used as a support camera to increase image quality. However, it does seem that Sony will be adding some features to the camera software that will make better use of the second camera.

Another issue that was slightly fixed is the slippery rear glass. The Xperia XZ2 Premium doesn’t seem as slippery on the back when placed on smoother surfaces but that might also be because there is more of a flat surface on this device than there was on the regular Xperia XZ2. However, the Xperia XZ2 Premium is still a slippery son of a gun on certain surfaces so keep that in mind. You’ll probably want to run a case of some sort to alleviate this problem.

Some of the other issues still exist however with the Xperia XZ2 Premium. While the position of the fingerprint reader is a bit higher, it’s still too low on the back. It really needs to be a lot higher up and in a more natural position for your fingers to rest on. Also like with most of these all glass phones, this thing is a giant fingerprint magnet.

Lastly, the Xperia XZ2 Premium is a seriously heavy device. This might be due to the large 3540 mAh battery or maybe something else internally, but this thing weighs quite a bit. 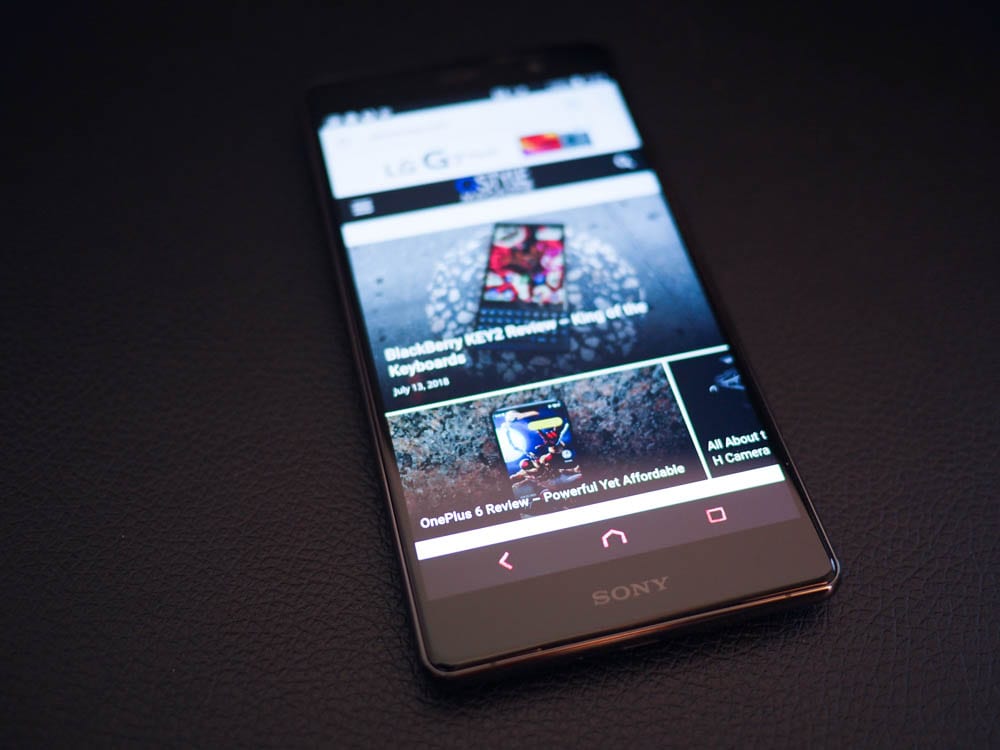 The Sony Xperia XZ2 Premium is a fantastically capable device. It’s top tier specs mean that pretty much any app or game you throw at it will run super smoothly and this also goes for the phone itself. It starts up almost immediately and there’s barely any lag when activating the camera from sleep. This is seriously one quick device that will make almost any hardcore user happy.

My favorite features are still here too, mainly the ability to PS4 Remote Play and the dedicated camera button. The addition of a second camera makes it much better than the regular Xperia XZ2, though it’s not quite as useful yet until the Bokeh and monochrome updates arrive. The display is also really gorgeous and I appreciate the two front facing speakers. It makes watching movies and playing games so much better than on other devices.

On the negative side, the Xperia XZ2 Premium is pretty heavy when compared to others and it is a pretty slippery on certain surfaces phone.

Aside from that, this is the best phone Sony has made and worth a look in my opinion. It’s specs are top notch and will give any current flagship a run for its money.