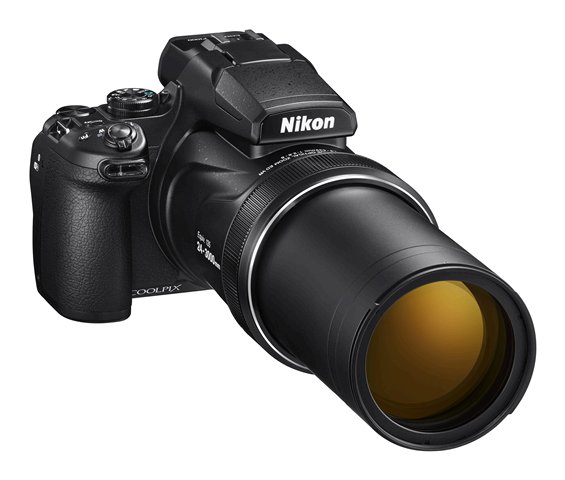 Nikon has just announced its latest superzoom, bridge camera, the COOLPIX P1000. While typically these types of cameras are often passed over, what absolutely caught our attention is the impressive (on paper at least) NIKKOR 24-3000mm Equivalent Optical Zoom Lens that’s been fitted onto this camera. It’s a whopping piece of glass that allows you a range of very wide to a literal telescope mounted on your Swiss Army knife of a camera. Let’s take a minute to marvel at Nikon’s bridge-camera moonshot.

The COOLPIX P1000 is something of a dying breed in the camera world, bridge cameras are often Jack-of-all-trades styled devices that aim to tick off various spec sheet checkboxes but never quite being great at any one function. With the P1000, Nikon hopes to change some hearts and minds and sway you to consider a camera that while probably literally able to take amazing shots of the moon, is powered by a sensor that’s only slightly larger than what you would find in a high-end smartphone. That said, the NIKKOR 24-3000mm (yes, that’s not a typo) provides an insane amount of optical range that is only doubled when switching over to the camera’s Dynamic Fine Zoom (digital zoom; cropping).

Another noteworthy addition is the camera’s ability to shoot RAW images as well as JPEGs. Unlike its predecessor, the P900, the P1000 gives users the ability to not just shoot with full manual settings but to save RAW image files for processing in third-party editing software like Lightroom or On1’s Photo RAW. This should give photographers the ability to push their images’ creative potential much farther than ever before.

Bridge-cameras, as the name suggests, are go-between devices that typically offer users the convenience and ease-of-use that you’d expect from a smart phone with (usually) telephoto lenses and the ability to have much more manual control over the key technical pieces of a photograph – exposure, shutter speed, and depth of field. It’s perfect for travelers or weekend warriors that don’t necessarily want to have to fuss with changing lenses but want more reach than they can get from a phone or smaller, point-and-shoot cameras.

While the ridiculously long zoom range is the draw, there is plenty of tech in the Nikon COOLPIX P1000 that would have us giving it a second and third look. From the P1000’s built-in Bluetooth and WiFi connectivity for image transfer and remote camera controls, to its 16-megapixel back side illuminated (BSI) CMOS sensor, to 4K video recording capabilities, the P1000 is worth keeping on the radar. The Nikon COOLPIX P1000 is expected to hit stores this September (2018) with an MSRP of $999.99.