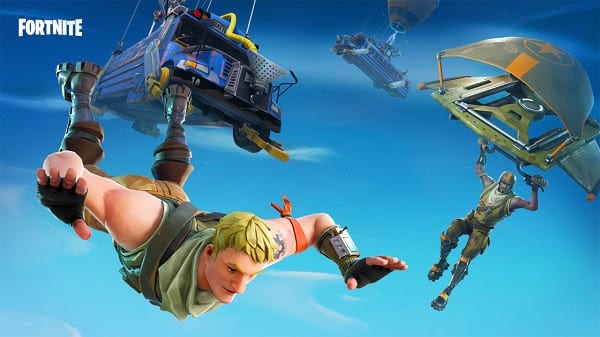 I’ll be the first to say I stink at Fortnite Battle Royale. Maybe it’s my age or just the type of game it is, but I can not compete against a lot of these younger players who are incredibility monstrous in this game. With that said, I can’t deny the immense popularity of this game and how it’s taken the gaming world by storm. For example, like in Formula 1, it depends on player’s popularity and score, which would be the best headset for Fortnite or any other hardware I also can’t deny the developer support on Fortnite and how Epic Games is trying to make this the best game they can by constantly pushing out updates and game modes.

For those who enjoyed the original 50v50 mode when it was out, the popular limited time mode, is back with improvements in Fortnite Battle Royale! In this new version, each team has a bus that approaches from opposite directions of the map. On the map, the friendly bus has a blue outline, and the enemy has red. The final storm circle is visible on the mini-map from the start and players are given 10 minutes to loot the map as the storm closes in on the circle, then five minutes to fight, and another five minutes as the storm shrinks to the end.

Supply drops come in batches of 3-6, fall every two minutes, and only land in the final storm circle. A dotted line has been been added to the map to indicate “battle lines” between the two teams. While players can cross the line, this will make running into enemies more likely! Other tweaks have been made, including increases to resource gathering, item spawns, ammo, and more.

Players can also earn double the XP from Thursday, April 19 until Sunday, April 22. The improved 50v50 mode is available now!