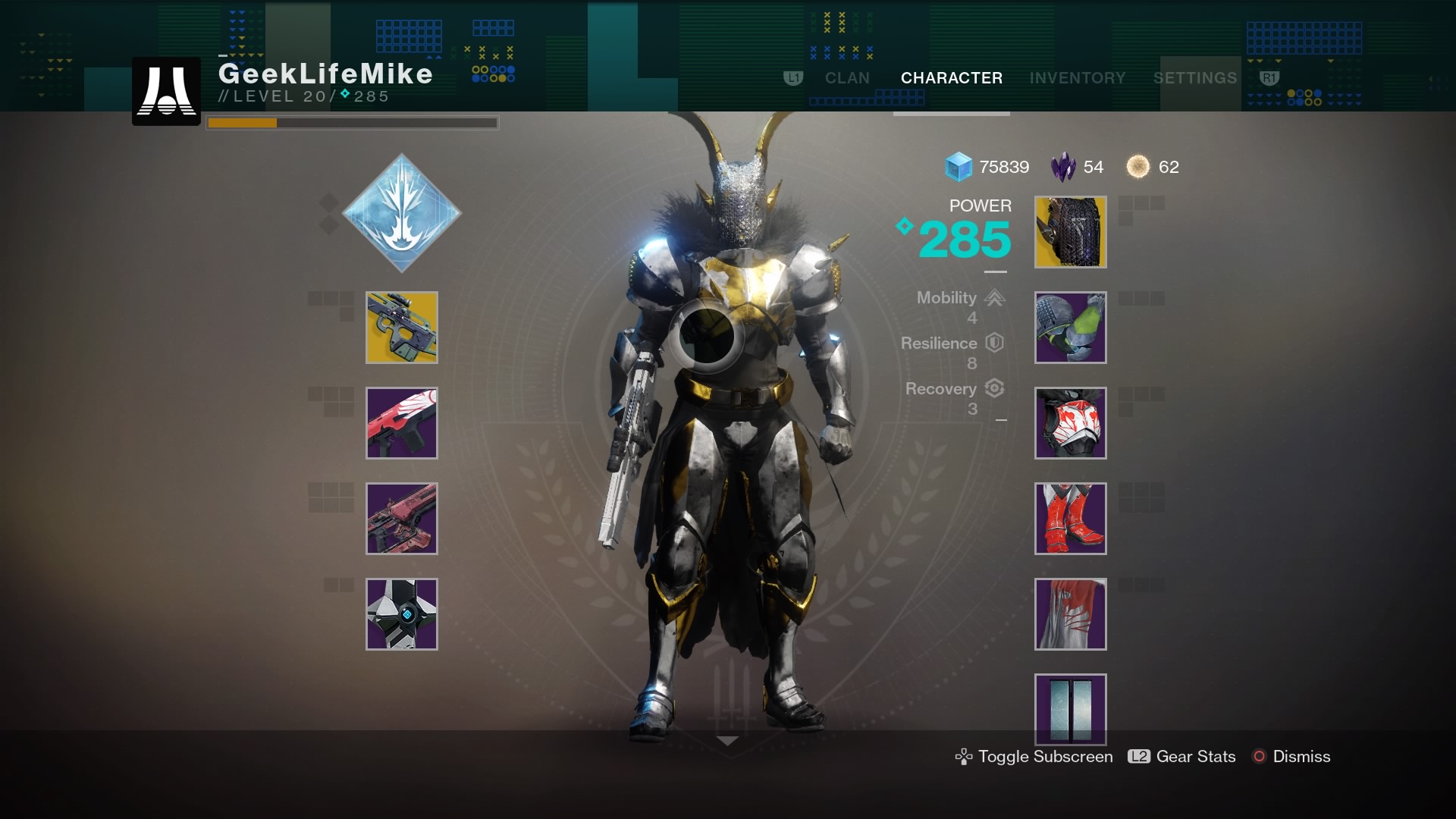 So, I’ve officially played Destiny 2 for 12 days and I absolutely love it. It’s so much of what I wanted from Destiny as a hardcore Destiny player. The guys over at Bungie listened to the community and it’s gripes and with that we have a well put together sequel that I can’t stop playing. I’ve devoted hours and hours to it thus far. I’ve even taken a few days off from work (Which I scheduled months ago) just to get my grind on and be raid ready on raid day unlike before when I had to wait weeks. Not this time. Destiny has been an incredible experience so far and it’s only been a week and I’ve learned a lot. In order to be successful at least in terms of being raid ready you should prep your guardian in a certain way. The system I used was pretty useful and I currently have a titan at a light level of 285 (and gaining) in 7 days and so far I’ve played for about 10 days and this is sort of my progression guide.

Just some backstory for those who may not know. When you jump into Destiny 2, right away you should understand that there is a new story and a new villain. The story on the first Destiny was confusing to put it mildly. There were a total of four raids and 4 DLC’s and it wasn’t until the last two DLC’s that the story of Destiny had a point and was somewhat cohesive. Destiny ended well but the fear of what was Destiny loomed over Destiny 2.

Bungie went back to the drawing board and came up with a story involving the most anticipated enemy we haven’t faced with the Cabal and their total badass leader for a boss. Ghaul or Dominus Ghaul. Ghaul leads the Destiny 2 story and starts off wrecking shit. The tower is gone, most of the guardians are killed off, the speaker is kidnapped and the Traveler is being siphoned for the “light” that Ghaul thinks belongs to him and the Cabal. We have to stop him and the undefeated Red Legion from getting the Light. Simple. This is where your quest to get stronger as a guardian begins.

What should you do to level up?

Destiny and Destiny 2 are all about the guardians and in order to get anything done in Destiny you have to level up. There are three ways. Your actual player level, your armor level and your gun/weapon level which are equipped with light and those numbers are averaged out to create your overall light level. Your light level is what allows you to participate in certain events like the nightfall and the raid and it’s even a point of bragging for some. Either way that’s where everything starts. If you’ve played Destiny before then you already know this but for those who are in jumping in for the first time you need to understand this. It’s essential. As you play the game more and more all of the aforementioned stats will rise but it’ll take time. Destiny 2’s campaign and total events add up to lengthy session and if you’re like most Destiny players you’ll want to do this on all three characters. How can you level up quickly? Here’s what I did

Back in Destiny, public events were sort of an anamoly. You saw them every now and then and they were super random. The worst part is, they didn’t always yield good loot despite the fact that they were so rare. It sucked. In Destiny 2, public events are a staple in the game appearing frequently and consistently and because of that it encourages a lot of team coordinated play, even if you don’t know the members of the team you’ve coordinated with. Once you open all three destinations in Destiny 2 make sure you check your director often to find out where the public events are. They always yield good rewards and if you execute certain tasks within any public event it’ll change into a heroic event and not only have your chances to get good loot improved but your chances to get exotic and legendary loot have just improved drastically. When I started to level up my character there was no faster method I used to level up my character than through the public events. In my opinion this is the best way to start leveling up.

Adventures are the filler parts of the overall story. Ghaul’s takeover wasn’t as simple as go to Earth and destroy the tower. After all, there are guardians there. The attack was coordinated and numerous, spanning multiple planets and moons. It’s a good idea to play the adventures on each planet or moon mostly for the gear drops and level points if you’re starting to level up your character. Try to finish them all if you can but if not it’s no big deal but I say if you’re gonna play Destiny 2. Do everything.

The main story or the Red War is what you’ll have to do in order to face off with Ghaul and complete the game so to speak. Everything you do afterwards is dependant on completing this part of the game. Exotic quests, better weapons and being able to join in the raid (which is why we all play Destiny) can’t happen until this story is complete. Take you time though. Don’t be in a rush to complete the game. When I finally faced off with Ghaul, I was light level 245 and I believe the recommended light level is 170. So grind it out and eventually you’ll finish the game.

Crucibles matter. I know Destiny 2 is a new experience for the most part but let’s not forget that the Crucible still has quality loot drops that you can earn the longer you stay in matches and from what I’ve seen since I’ve been playing, they’re somewhat merit based now. Lord Shaxx has a bunch of challenges and side quests that you can do to gain legendary engrams and gear that he himself gives you. Still an effective way to level up don’t forget about them in the midst of trying to do everything else.

Mods are a new thing in Destiny 2. It allows you level up your armor or weapons 5 light points or you can use mods to add subclass advantages to your character itself or to any specific weapon you want. Mods are not limited to just light and burns. There are shader mods that allow you customize any of your characters in any colorway you see fit. You can change the colors of just about everything you use and wear in the game. The only thing that sucks is that if you use a shader on a specific piece of gear and you switch up then you lose that shader and you’ll have to spend more glimmer to use it again.

Sometimes in the game you’ll find that there is certain armor or weapons that you’ve just grown accustomed to whether it be for the look, how it helps your character’s defense stats or how a weapon helps in battle. If you have a legendary or exotic weapon or armor that you may not want to give up on using then infusion is the best way to level up if you get a drop greater than the light level of your currently equipped gear. This was super helpful in Destiny and the same remains here although Bungie did tweak the infusion process a little bit so that’s it’s not so liberal. Items to be infused now have to be closer to the same archetype of what you’re infusing and no longer can you infuse cross subclass gear, meaning you can no longer infuse a titan armor into a warlock armor just because it’s got a higher light level.

Glimmer is what makes all of this possible. Instead of glimmer being capped at 25,000 Bungie increased it 99,999+ or 100k. It seems like it’s a lot of glimmer to play with but the more you customize with shaders, infuse and buy mods you’ll eat that glimmer gone in a matter of seconds. Use it wisely but use it. Don’t sit on your glimmer. It’s more than helpful to leveling up.

As of right now there doesn’t seem to be any semblance of the factions that we pledged allegiance to in Destiny. Instead of Dead Orbit, New Monarchy and Future War Cult you have factions based on where you are in the game, literally. Failsafe is the faction leader on Nessus, Sloane is the faction leader on Titan and Devlin is Earth. In each place, depending on whether you’re exploring or doing a public event or adventure there are going to be faction tokens that drop and you can definitely use them to get high light level rewards. Don’t forget about your tokens.

Strikes, Trials, Nightfalls and the Raid

If you really want to take advantage of getting legendary and exotic engrams then there is no better way than Strikes, Trials, Nightfalls and of course the Raid. These events offer a level of difficulty unlike other events and require a fireteam and teamwork, That’s why there is such a payoff when you complete these events. Do them, do them often if possible. The Trials comes around every Friday until the reset on Tuesday and it’s really for the more “advanced” player but that doesn’t mean you shouldn’t play. You’ll still get some loot that you can only get from the Trials so if not for any other reason, do it for that. Same with the raid although the raid requires completion to get loot and the Leviathan raid is very stingy.

After you’ve done all this

You’ve done all of this and now what? Maybe you’ve done this and you haven’t gotten to the level you’ve expected. Well Destiny 2 is only 12 days old and some of the best Destiny players with some of the best loot have done it over lengthy periods of time, myself included so don’t drive yourself nuts. Destiny is and will always be about the grind so if you ain’t about the grind don’t complain. The good thing about Destiny 2 is Bungie made it all about loot and there’s going to be an abundance of it so if you’re not leveling up then that’s on you. For added replay value make sure you create three characters, preferably of each character type because they serve different purposes. However you do this, enjoy the game its super dope and get your level on.